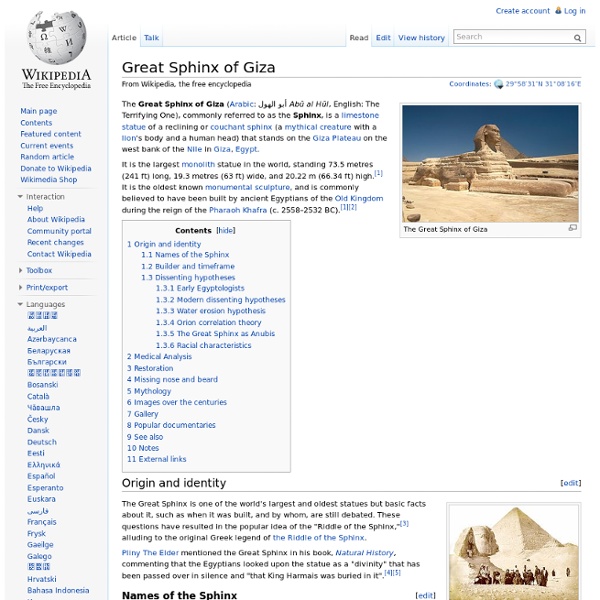 The Great Sphinx of Giza, 2008 It is the largest monolith statue in the world, standing 73.5 metres (241 ft) long, 19.3 metres (63 ft) wide, and 20.22 m (66.34 ft) high.[1] It is the oldest known monumental sculpture, and is commonly believed to have been built by ancient Egyptians of the Old Kingdom during the reign of the Pharaoh Khafra (c. 2558–2532 BC).[1][2] Origin and identity The Great Sphinx partly under the sand, ca. 1870's. The Great Sphinx is one of the world's largest and oldest statues but basic facts about it, such as when it was built, and by whom, are still debated. The Great Sphinx partially excavated, ca. 1878. Names of the Sphinx The commonly used name Sphinx was given to it in classical antiquity, about 2000 years after the accepted date of its construction, by reference to a Greek mythological beast with a lion's body, a woman's head and the wings of an eagle (although, like most Egyptian sphinxes, the Great Sphinx has a man's head and no wings). Builder and timeframe

Egyptian pyramids A view of the pyramids at Giza from the plateau to the south of the complex. From left to right, the three largest are: the Pyramid of Menkaure, the Pyramid of Khafre and the Great Pyramid of Khufu. The three smaller pyramids in the foreground are subsidiary structures associated with Menkaure's pyramid. There are 138 pyramids discovered in Egypt as of 2008.[1][2] Most were built as tombs for the country's Pharaohs and their consorts during the Old and Middle Kingdom periods.[3][4][5] The earliest known Egyptian pyramids are found at Saqqara, northwest of Memphis. The earliest among these is the Pyramid of Djoser (constructed 2630 BCE–2611 BCE) which was built during the third dynasty. The most famous Egyptian pyramids are those found at Giza, on the outskirts of Cairo. Historical development The Mastaba of Faraoun, at Saqqara By the time of the early dynastic period of Egyptian history, those with sufficient means were buried in bench-like structures known as mastabas.[10][11] Abu Rawash

Ancient Egypt Ancient Egypt was an ancient civilization of Northeastern Africa, concentrated along the lower reaches of the Nile River in what is now the modern country of Egypt. It is one of six civilizations globally to arise independently. Egyptian civilization coalesced around 3150 BC (according to conventional Egyptian chronology)[1] with the political unification of Upper and Lower Egypt under the first pharaoh.[2] The history of ancient Egypt occurred in a series of stable Kingdoms, separated by periods of relative instability known as Intermediate Periods: the Old Kingdom of the Early Bronze Age, the Middle Kingdom of the Middle Bronze Age and the New Kingdom of the Late Bronze Age. History Map of ancient Egypt, showing major cities and sites of the Dynastic period (c. 3150 BC to 30 BC) Predynastic period A typical Naqada II jar decorated with gazelles. In Predynastic and Early Dynastic times, the Egyptian climate was much less arid than it is today. Early Dynastic Period (c. 3050 –2686 BC)

Salem Witch Museum - Salem, Massachusetts In January of 1692, the daughter and niece of Reverend Samuel Parris of Salem Village became ill. When they failed to improve, the village doctor, William Griggs, was called in. His diagnosis of bewitchment put into motion the forces that would ultimately result in the death by hanging of nineteen men and women. In addition, one man was crushed to death; seven others died in prison, and the lives of many were irrevocably changed. To understand the events of the Salem witch trials, it is necessary to examine the times in which accusations of witchcraft occurred. There were the ordinary stresses of 17th-century life in Massachusetts Bay Colony. In June of 1692, the special Court of Oyer (to hear) and Terminer (to decide) sat in Salem to hear the cases of witchcraft. As years passed, apologies were offered, and restitution was made to the victims' families. Education Department - faq@salemwitchmuseum.com

The Mayan Calendar - The World Will Not End Steep Uphill Climb to 2012: Messages from the Mayan Milieu ©- Copyright 2002 by Steven McFadden In early Autumn 2002, Carlos Barrios journeyed North from his home in Guatemala to the Eastern edge of the Four Corners. In Santa Fe, NM, at the tail of the Rocky Mountain spine, Mr. Barrios spoke in a knowledgeable manner about the Mayan tradition and the fabled Mayan calendars. The Mayan calendars are an object of intense interest for many thousands of people right now, because they focus upon the watershed date of Dec. 21, 2012. Everything changes by then, it is said. With a cultural heritage including thousands of pyramids and temples, and a calendar that has proven itself to be astronomically accurate over millions of years, the Maya tradition is widely considered to be a mystic key to the soul of Turtle Island (North America). Mayan Cholq'ij - an image of the Mayan Tzolkin calendar used on the Altiplano.

Maya mythology Maya mythology is part of Mesoamerican mythology and comprises all of the Maya tales in which personified forces of nature, deities, and the heroes interacting with these play the main roles. Other parts of Maya oral tradition (such as animal tales and many moralising stories) do not properly belong to the domain of mythology, but rather to legend and folk tale. Sources[edit] The oldest written myths date from the 16th century and are found in historical sources from the Guatemalan Highlands The most important of these documents is the Popol Vuh or 'Book of the Council'which contains Quichean creation stories and some of the adventures of the Hero Twins, Hunahpu and Xbalanque Yucatán is an equally important region. In the 19th and 20th centuries, anthropologists and local folklorists have committed many stories to paper. Main gods[edit] Important mythical themes[edit] Creation and end of the world[edit] Creation of mankind[edit] Actions of the heroes: Arranging the world[edit] Notes[edit]

Ancient World Ancient history Ancient history is the aggregate of past events[1] from the beginning of recorded human history to the Early Middle Ages or the Postclassical Era. The span of recorded history is roughly 5,000 years, with Sumerian Cuneiform script, the oldest discovered form of coherent writing, from the protoliterate period around the 30th century BC.[2] The term classical antiquity is often used to refer to history in the Old World from the beginning of recorded Greek history in 776 BC (First Olympiad). This roughly coincides with the traditional date of the founding of Rome in 753 BC, the beginning of the history of ancient Rome, and the beginning of the Archaic period in Ancient Greece. In India, the period includes the early period of the Middle Kingdoms,[9][10][11] and, in China, the time up to the Qin Dynasty is included.[12][13] Study[edit] Historians have two major avenues which they take to better understand the ancient world: archaeology and the study of source texts. Archaeology[edit]