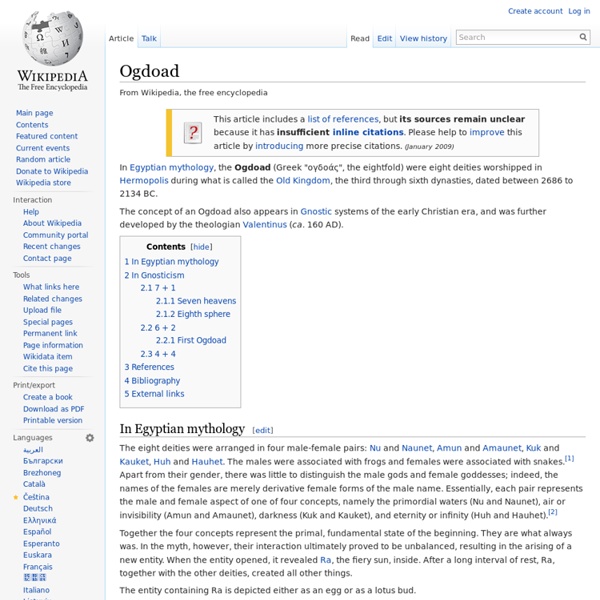 In Egyptian mythology, the Ogdoad (Greek "ογδοάς", the eightfold) were eight deities worshipped in Hermopolis during what is called the Old Kingdom, the third through sixth dynasties, dated between 2686 to 2134 BC. In Egyptian mythology[edit] Together the four concepts represent the primal, fundamental state of the beginning. They are what always was. In the myth, however, their interaction ultimately proved to be unbalanced, resulting in the arising of a new entity. When the entity opened, it revealed Ra, the fiery sun, inside. The entity containing Ra is depicted either as an egg or as a lotus bud. In the former version, a mound arises from the waters. In Gnosticism[edit] The number eight plays an important part in Gnostic systems, and it is necessary to distinguish the different forms in which it appeared at different stages in the development of Gnosticism. 7 + 1[edit] Seven heavens[edit] Eighth sphere[edit] The mysteries of the number seven are treated of by Clem. 6 + 2[edit] 4 + 4[edit] Related:  Astronomy

Ancient Egyptian religion Ancient Egyptian religion was a complex system of polytheistic beliefs and rituals which were an integral part of ancient Egyptian society. It centered on the Egyptians' interaction with many deities who were believed to be present in, and in control of, the forces and elements of nature. The practices of Egyptian religion were efforts to provide for the gods and gain their favor. Formal religious practice centered on the pharaoh, the king of Egypt. Although a human, the Pharaoh was believed to be descended from the gods. Individuals could interact with the gods for their own purposes, appealing for their help through prayer or compelling them to act through magic. The religion had its roots in Egypt's prehistory and lasted for more than 3,000 years. Theology The beliefs and rituals now referred to as "Ancient Egyptian religion" were integral within every aspect of Egyptian culture. Deities The gods Osiris, Anubis, and Horus, in order from left to right Associations between deities Atenism

Geographic Distribution of Religious Centers in the U.S. These maps were generated from the listings in the Pluralism Project's Directory of Religious Centers and reflect the distributions as of August 2006. Click on the thumbnail to view a printable, full-size map in a new window. Interfaith: 604 Centers Jainism: 94 Centers Sikhism: 244 Centers Hinduism: 714 Centers Buddhism: 2150 Centers Islam: 1583 Centers NOTES ON EGYPTIAN RELIGION AND ASTRONOMY Inscriptions and pictorial representations inside tombs give clues to the mythological context in which the pyramids were built, as well as to the meanings of architectural features. They contain allusions to celestial bodies. Here I briefly describe the salient points of Egyptian religion (to the best of my knowledge) as backgound to a discussion of the ideas that may have motivated the builders, beginning with some notes on the geographical and cultural context. Overview Egypt was organised in the name of religion and the figurehead of pharaoh, the 'living god', represented a focus of contact with the divine for the whole population. Origins According to the accepted view, civilisations are made possible by settled agriculture producing food for more people than those necessary to work the land, thus promoting the division of labour and the establishment of heirarchies. Egyptians claimed that their civilisation had been founded by divine ancestors. Gods of the early Old Kingdom

Sphinx Perhaps the first sphinx, Queen Hetepheres II from the fourth dynasty (Cairo Museum) A sphinx (Greek: Σφίγξ /sphinx/. Bœotian: Φίξ /Phix) is a mythical creature with, as a minimum, the body of a lion and a human head. In Greek tradition, it has the haunches of a lion, sometimes with the wings of a great bird, and the face of a human. In European decorative art, the sphinx enjoyed a major revival during the Renaissance. Generally the role of sphinxes is associated with architectural structures such as royal tombs or religious temples. Back of Sphinx, Giza Egypt Egyptian sphinxes[edit] The largest and most famous sphinx is the Great Sphinx of Giza, situated at the Giza Plateau adjacent to the Great Pyramids of Giza on the west bank of the Nile River and facing due east ( WikiMiniAtlas 29°58′31″N 31°08′15″E﻿ / ﻿29.97528°N 31.13750°E﻿ / 29.97528; 31.13750). Perhaps the first sphinx in Egypt was one depicting Queen Hetepheres II, of the fourth dynasty that lasted from 2723 to 2563 BC.

The strange star that has serious scientists talking about an alien megastructure A long exposure image showing an airplane passing in the sky during the Perseids meteor shower over the remains of a centuries old Christian basilica near the town of Pirdop, Bulgaria, early on Aug. 12. (Nikolay Doychinov/AFP/Getty Images) “It was kind of unbelievable that it was real data,” said Yale University astronomer Tabetha Boyajian. “We were scratching our heads. She was talking to the New Scientist about KIC 8462852, a distant star with a very unusual flickering habit. Boyajian wrote up a paper on possible explanations for the star’s bizarre behavior, and it was published recently in the Monthly Notices of the Royal Astronomical Society. To Wright, it looked like the kind of star he and his colleagues had been waiting for. Aliens. Or, to be more specific, something built by aliens — a “swarm of megastructures,” as he told the Atlantic, likely outfitted with solar panels to collect energy from the star. [No, we haven’t discovered alien megastructures around a distant star]

Ancient Egypt: the Mythology and egyptian myths Maat The earliest surviving records indicating Maat is the norm for nature and society, in this world and the next, were recorded during the Old Kingdom, the earliest substantial surviving examples being found in the Pyramid Texts of Unas (ca. 2375 BCE and 2345 BCE).[2] Later, as a goddess in other traditions of the Egyptian pantheon, where most goddesses were paired with a male aspect, her masculine counterpart was Thoth and their attributes are the same. After the rise of Ra they were depicted together in the Solar Barque. After her role in creation and continuously preventing the universe from returning to chaos, her primary role in Egyptian mythology dealt with the weighing of souls that took place in the underworld, Duat.[3] Her feather was the measure that determined whether the souls (considered to reside in the heart) of the departed would reach the paradise of afterlife successfully. Maat as a principle[edit] Winged Maat Maat and the law[edit] Maat wearing feather of truth See also[edit]

Seshat In Egyptian mythology, Seshat (also spelled Safkhet, Sesat, Seshet, Sesheta, and Seshata) was the Ancient Egyptian goddess of wisdom, knowledge, and writing. She was seen as a scribe and record keeper, and her name means she who scrivens (i.e. she who is the scribe), and is credited with inventing writing. She also became identified as the goddess of architecture, astronomy, astrology, building, mathematics, and surveying. In art, she was depicted as a woman with a seven-pointed emblem above her head. Usually, she is shown holding a palm stem, bearing notches to denote the recording of the passage of time, especially for keeping track of the allotment of time for the life of the pharaoh. She is frequently shown dressed in a cheetah or leopard hide, a symbol of funerary priests. As the divine measurer and scribe, Seshat was believed to appear to assist the pharaoh in both of these practices. Seshat assisted the pharaoh in the "stretching the cord" ritual. See also[edit] Gallery[edit]

Egyptian mythology Egyptian mythology is the collection of myths from ancient Egypt, which describe the actions of the Egyptian gods as a means of understanding the world. The beliefs that these myths express are an important part of ancient Egyptian religion. Myths appear frequently in Egyptian writings and art, particularly in short stories and in religious material such as hymns, ritual texts, funerary texts, and temple decoration. These sources rarely contain a complete account of a myth and often describe only brief fragments. The details of these sacred events differ greatly from one text to another and often seem contradictory. Egyptian myths are primarily metaphorical, translating the essence and behavior of deities into terms that humans can understand. Mythology profoundly influenced Egyptian culture. Origins[edit] The development of Egyptian myth is difficult to trace. Another possible source for mythology is ritual. Definition and scope[edit] Content and meaning[edit] Sources[edit]