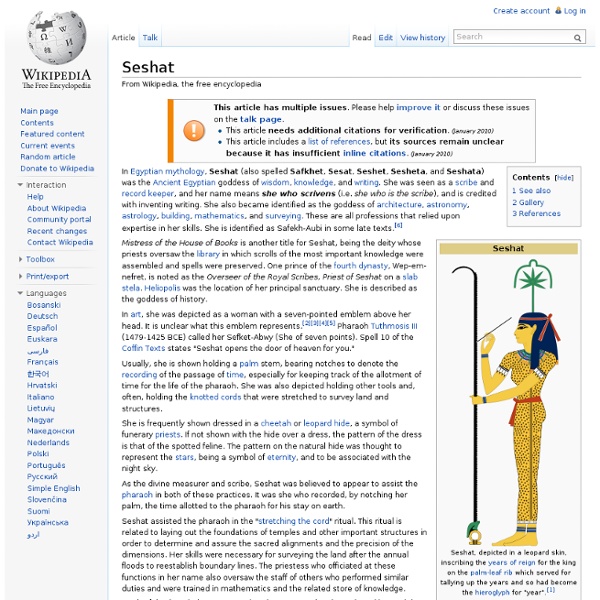 In Egyptian mythology, Seshat (also spelled Safkhet, Sesat, Seshet, Sesheta, and Seshata) was the Ancient Egyptian goddess of wisdom, knowledge, and writing. She was seen as a scribe and record keeper, and her name means she who scrivens (i.e. she who is the scribe), and is credited with inventing writing. She also became identified as the goddess of architecture, astronomy, astrology, building, mathematics, and surveying. In art, she was depicted as a woman with a seven-pointed emblem above her head. Usually, she is shown holding a palm stem, bearing notches to denote the recording of the passage of time, especially for keeping track of the allotment of time for the life of the pharaoh. She is frequently shown dressed in a cheetah or leopard hide, a symbol of funerary priests. As the divine measurer and scribe, Seshat was believed to appear to assist the pharaoh in both of these practices. Seshat assisted the pharaoh in the "stretching the cord" ritual. See also[edit] Gallery[edit]

Ogdoad In Egyptian mythology, the Ogdoad (Greek "ογδοάς", the eightfold) were eight deities worshipped in Hermopolis during what is called the Old Kingdom, the third through sixth dynasties, dated between 2686 to 2134 BC. In Egyptian mythology[edit] Together the four concepts represent the primal, fundamental state of the beginning. They are what always was. In the myth, however, their interaction ultimately proved to be unbalanced, resulting in the arising of a new entity. When the entity opened, it revealed Ra, the fiery sun, inside. The entity containing Ra is depicted either as an egg or as a lotus bud. In the former version, a mound arises from the waters. In Gnosticism[edit] The number eight plays an important part in Gnostic systems, and it is necessary to distinguish the different forms in which it appeared at different stages in the development of Gnosticism. 7 + 1[edit] Seven heavens[edit] Eighth sphere[edit] The mysteries of the number seven are treated of by Clem. 6 + 2[edit] 4 + 4[edit]

Ancient Egyptian religion Ancient Egyptian religion was a complex system of polytheistic beliefs and rituals which were an integral part of ancient Egyptian society. It centered on the Egyptians' interaction with many deities who were believed to be present in, and in control of, the forces and elements of nature. The practices of Egyptian religion were efforts to provide for the gods and gain their favor. Formal religious practice centered on the pharaoh, the king of Egypt. Although a human, the Pharaoh was believed to be descended from the gods. Individuals could interact with the gods for their own purposes, appealing for their help through prayer or compelling them to act through magic. The religion had its roots in Egypt's prehistory and lasted for more than 3,000 years. Theology The beliefs and rituals now referred to as "Ancient Egyptian religion" were integral within every aspect of Egyptian culture. Deities The gods Osiris, Anubis, and Horus, in order from left to right Associations between deities Atenism

Sphinx Perhaps the first sphinx, Queen Hetepheres II from the fourth dynasty (Cairo Museum) A sphinx (Greek: Σφίγξ /sphinx/. Bœotian: Φίξ /Phix) is a mythical creature with, as a minimum, the body of a lion and a human head. In Greek tradition, it has the haunches of a lion, sometimes with the wings of a great bird, and the face of a human. In European decorative art, the sphinx enjoyed a major revival during the Renaissance. Generally the role of sphinxes is associated with architectural structures such as royal tombs or religious temples. Back of Sphinx, Giza Egypt Egyptian sphinxes[edit] The largest and most famous sphinx is the Great Sphinx of Giza, situated at the Giza Plateau adjacent to the Great Pyramids of Giza on the west bank of the Nile River and facing due east ( WikiMiniAtlas 29°58′31″N 31°08′15″E﻿ / ﻿29.97528°N 31.13750°E﻿ / 29.97528; 31.13750). Perhaps the first sphinx in Egypt was one depicting Queen Hetepheres II, of the fourth dynasty that lasted from 2723 to 2563 BC.

Egyptian mythology Egyptian mythology is the collection of myths from ancient Egypt, which describe the actions of the Egyptian gods as a means of understanding the world. The beliefs that these myths express are an important part of ancient Egyptian religion. Myths appear frequently in Egyptian writings and art, particularly in short stories and in religious material such as hymns, ritual texts, funerary texts, and temple decoration. These sources rarely contain a complete account of a myth and often describe only brief fragments. The details of these sacred events differ greatly from one text to another and often seem contradictory. Egyptian myths are primarily metaphorical, translating the essence and behavior of deities into terms that humans can understand. Mythology profoundly influenced Egyptian culture. Origins[edit] The development of Egyptian myth is difficult to trace. Another possible source for mythology is ritual. Definition and scope[edit] Content and meaning[edit] Sources[edit]