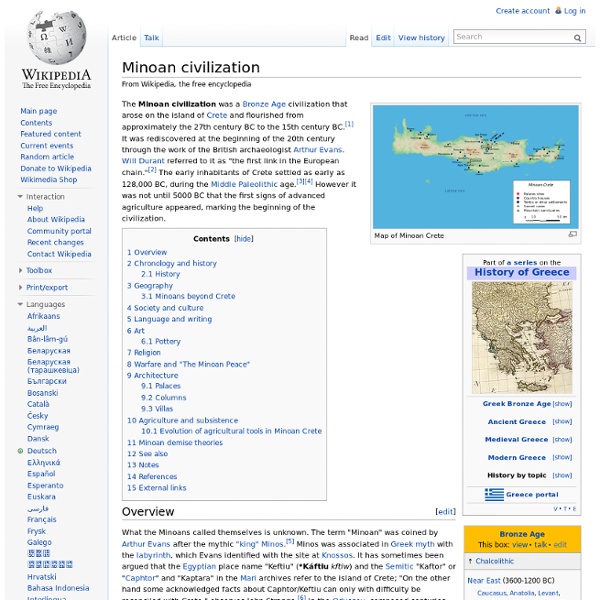 Map of Minoan Crete The Minoan civilization was an Aegean Bronze Age civilization that arose on the island of Crete and flourished from approximately the 27th century BC to the 15th century BC.[1] It was rediscovered at the beginning of the 20th century through the work of British archaeologist Arthur Evans. Will Durant referred to it as "the first link in the European chain. The early inhabitants of Crete settled as early as 128,000 BC, during the Middle Paleolithic age.[3][4] It was not until 5000 BC that the first signs of advanced agriculture appeared, marking the beginning of civilization. Overview[edit] The term "Minoan" was coined by Arthur Evans after the mythic "king" Minos.[5] Minos was associated in Greek myth with the labyrinth, which Evans identified with the site at Knossos. Chronology and history[edit] Rather than associate absolute calendar dates for the Minoan period, archaeologists use two systems of relative chronology. History[edit] Geography[edit]

The 10 Most Puzzling Ancient Artifacts The Bible tells us that God created Adam and Eve just a few thousand years ago, by some fundamentalist interpretations. Science informs us that this is mere fiction and that man is a few million years old, and that civilization just tens of thousands of years old. Could it be, however, that conventional science is just as mistaken as the Bible stories? There is a great deal of archeological evidence that the history of life on earth might be far different than what current geological and anthropological texts tell us. The Grooved Spheres Over the last few decades, miners in South Africa have been digging up mysterious metal spheres. The Dropa Stones In 1938, an archeological expedition led by Dr. The Ica StonesBeginning in the 1930s, the father of Dr. The Antikythera MechanismA perplexing artifact was recovered by sponge-divers from a shipwreck in 1900 off the coast of Antikythera, a small island that lies northwest of Crete. Ancient Model Aircraft Impossible Fossils

Mary, Queen of Scots Mary, Queen of Scots (7/8 December 1542 – 8 February 1587), also known as Mary Stuart[3] or Mary I of Scotland, was queen regnant of Scotland from 14 December 1542 to 24 July 1567 and queen consort of France from 10 July 1559 to 5 December 1560. Mary, the only surviving legitimate child of King James V of Scotland, was 6 days old when her father died and she acceded to the throne. She spent most of her childhood in France while Scotland was ruled by regents, and in 1558, she married the Dauphin of France, Francis. James Hepburn, 4th Earl of Bothwell, was generally believed to have orchestrated Darnley's death, but he was acquitted of the charge in April 1567, and the following month he married Mary. Childhood and early reign[edit] Mary was born on 7 or 8 December 1542 at Linlithgow Palace, Linlithgow, Scotland, to James V, King of Scots, and his French second wife, Mary of Guise. Treaty of Greenwich[edit] Coin of 1553: obverse, coat of arms of Scotland; reverse, royal monogram

government cover up Imhotep Statuette of Imhotep in the Louvre Chancellor of the King of Egypt, Doctor, First in line after the King of Upper Egypt, Administrator of the Great Palace, Hereditary nobleman, High Priest of Heliopolis, Builder, Chief Carpenter, Chief Sculptor, and Maker of Vases in Chief. He was one of only a few commoners ever to be accorded divine status after death. The center of his cult was Memphis. Attribution of achievements and inventions[edit] Architecture and engineering[edit] Pyramid of Djoser Medicine[edit] Imhotep was an important figure in Ancient Egyptian medicine. 27 head injuries (cases #1-27)6 throat and neck injuries (cases #28-33)2 injuries to the clavicle (collarbone) (cases #34-35)3 injuries to the arm (cases #36-38)8 injuries to the sternum (breastbone) and ribs (cases #39-44)1 tumour and 1 abscess of the breast (cases #45-46)1 injury to the shoulder (case #47)1 injury to the spine (case #48) [13] Descriptions of Imhotep by James Henry Breasted et al Deification[edit] Birth myths[edit]

Robot finds 3 rooms under Feathered Serpent temple A robot named Tláloc II-TC, equipped with an infrared camera and laser scanner, has discovered three new chambers underneath the Temple of the Feathered Serpent pyramid in the Mesoamerican metropolis of Teotihuacan. He was sent down a tunnel 390 feet long that was discovered 50 feet below the surface of the temple in 2003. The tunnel had been filled with debris by the ancient Teotihuacans to block access, an effective technique since despite centuries of looting and archaeological excavations nobody had managed to breach it. It’s been a decade since the subterranean conduit was discovered and five years since excavations began, and archaeologists have only able to get a glimpse of what’s on the other side in the past few months. They first discovered two side rooms dubbed the North Chamber and the South Chamber 236 and 242 feet respectively from the entrance. The human archaeologists couldn’t get any further than that, so they deployed Tláloc II-TC to travel another 65 feet.