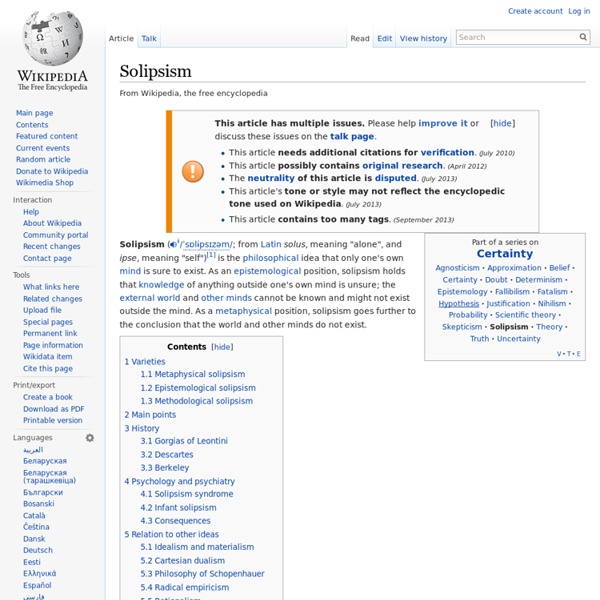 Solipsism ( i/ˈsɒlɨpsɪzəm/; from Latin solus, meaning "alone", and ipse, meaning "self")[1] is the philosophical idea that only one's own mind is sure to exist. As an epistemological position, solipsism holds that knowledge of anything outside one's own mind is unsure; the external world and other minds cannot be known and might not exist outside the mind. As a metaphysical position, solipsism goes further to the conclusion that the world and other minds do not exist. Varieties[edit] There are varying degrees of solipsism that parallel the varying degrees of serious skepticism. [edit] Epistemological solipsism[edit] Epistemological solipsism is the variety of idealism according to which only the directly accessible mental contents of the solipsistic philosopher can be known. Methodological solipsism[edit] Methodological solipsism may be a sort of weak agnostic (meaning "missing knowledge") solipsism. Main points[edit] See also: Solipsism: Relation to other ideas (below) History[edit]

List of unsolved problems in philosophy This is a list of some of the major unsolved problems in philosophy. Clearly, unsolved philosophical problems exist in the lay sense (e.g. "What is the meaning of life?", "Where did we come from?", "What is reality?", etc.). Objective idealism Objective idealism is an idealistic metaphysics that postulates that there is in an important sense only one perceiver, and that this perceiver is one with that which is perceived. One important advocate of such a metaphysics, Josiah Royce (the founder of American idealism),[1] wrote that he was indifferent "whether anybody calls all this Theism or Pantheism". Plato is regarded as one of the earliest representatives of objective idealism. It is distinct from the subjective idealism of George Berkeley, and it abandons the thing-in-itself of Kant's dualism. Overview[edit]

Amazing Sight in the South Pacific A yacht was traveling in the south Pacific when the crew came across a weird sight. Look at these photos and try to imagine the thrill of experiencing this phenomenon. NO!!!! plato.stanford 1. The (Traditional) Epistemological Problem The traditional epistemological problem of other minds is often associated with scepticism. The sceptic raises a doubt about the possibility of knowledge in connection with the mind of another, a doubt which is thought to follow from a more general doubt raised by Descartes concerning our knowledge of the external world. This latter doubt arises in stages, each of which is designed to draw us into a more wide-reaching scepticism: at stage one it is observed that the senses sometimes deceive; at stage two the possibility of an extended dream is considered; and at stage three the possibility is introduced that there is an Evil Demon deceiving me to think that there is a world beyond how things appear.

Pascal's Wager Blaise Pascal Pascal's Wager is an argument in apologetic philosophy which was devised by the seventeenth-century French philosopher, mathematician, and physicist Blaise Pascal (1623–1662). It posits that humans all bet with their lives either that God exists or does not exist. Given the possibility that God actually does exist and assuming the infinite gain or loss associated with belief in God or with unbelief, a rational person should live as though God exists and seek to believe in God. Oedipus complex The Oedipus complex (also spelled Œdipus complex) is a concept of psychoanalytic theory. Sigmund Freud introduced the concept in his Interpretation of Dreams (1899) and coined the expression in his A Special Type of Choice of Object made by Men (1910).[1][2] The positive Oedipus complex refers to a child's unconscious sexual desire for the opposite-sex parent and hatred for the same-sex parent. The negative Oedipus complex refers to a child's unconscious sexual desire for the same-sex parent and hatred for the opposite-sex parent.[2][3][4] Freud considered that the child's identification with the same-sex parent is the successful outcome of the complex and that unsuccessful outcome of the complex might lead to neurosis, pedophilia, and homosexuality.

Find Free Kindle Books - Fevered Mutterings Disclaimer: this post is about free, legal Kindle books, of which there are shedloads (seriously, scroll downwards). It’s not sponsored by Amazon or anyone else. And if you’re reading, you probably have a Kindle. But if you were thinking of buying a Kindle for the first time, click through using the banner below – it won’t cost you anything, and this humble, pathetically modest writer gets a tiny amount of cash to help keep his silver champagne bucket full and his Ferrari well-tuned. Ta.

en.m.wikipedia Pedagogy (/ˈpɛdəɡɒdʒi/, /ˈpɛdəɡoʊdʒi/, or /ˈpɛdəɡɒɡi/[1][2]) is the discipline that deals with the theory and practice of education; or the study and practice of 'how best to teach'. Its aims range from the general (full development of the human being via liberal education) to the narrower specifics of vocational education (the imparting and acquisition of specific skills). For example, Paulo Freire referred to his method of teaching people as "critical pedagogy". In correlation with those instructive strategies, the instructor's own philosophical beliefs of instruction are harbored and governed by the pupil's background knowledge and experience, situation, and environment, as well as learning goals set by the student and teacher. One example would be the Socratic schools of thought.[3][4][5] The teaching of adults, however, may be referred to as andragogy.

Limerick City in Munster, Ireland Limerick (/ˈlɪmərɪk/;[5] Irish: Luimneach [ˈl̪imʲɨnʲəx]) is a city in County Limerick, Ireland. It is located in the Mid-West Region and is also part of the province of Munster. Limerick City and County Council is the local authority for the city. The city lies on the River Shannon, with the historic core of the city located on King's Island, which is bounded by the Shannon and the Abbey River. Ten Amazing Things You Can Do With Coconut Oil - Health - GOOD If you've read No More Dirty Looks, or our blog, you know my co-author Alexandra and I are fond of oils, and coconut oil in particular because it’s an amazing and cost-saving multitasker that has lots of qualities to recommend it. It’s a rich moisturizer, it’s cheap, it’s versatile, it’s antimicrobial, antifungal, and antibacterial, has a decent amount of antioxidants, and it smells like baked goods. What’s not to love? Well, some stuff. You can get it at any good health food store in the cooking oil section, just be sure to spend the extra buck or two to get raw, organic, virgin coconut oil. Now, without further ado: Here are the 10 specific things I’ve tried it for, with honest assessments of how that worked for me:

Ontic#:~:text=From%20Wikipedia%2C%20the%20free%20encyclopedia,%2C%20real%2C%20or%20factual%20existence In philosophical ontology, ontic (from the Greek ὄν, genitive ὄντος: "of that which is") is physical, real, or factual existence. Overview[edit] "Ontic" describes what is there, as opposed to the nature or properties of that being.

Macdonald triad The Macdonald triad (also known as the triad of sociopathy or the homicidal triad) is a set of three behavioral characteristics that has been suggested, if all three or any combination of two, are present together, to be predictive of or associated with, later violent tendencies, particularly with relation to serial offenses. The triad was first proposed by psychiatrist J.M. Macdonald in "The Threat to Kill", a 1963 paper in the American Journal of Psychiatry.[1] Small-scale studies conducted by psychiatrists Daniel Hellman and Nathan Blackman, and then FBI agents John E. Douglas and Robert K. Ressler along with Dr. Ann Burgess, claimed substantial evidence for the association of these childhood patterns with later predator behavior.[2] Although it remains an influential and widely taught theory, subsequent research has generally not validated this line of thinking.[3][4]