The Riddle of Epicurus or Epicurean paradox is the earliest known description of the Problem of evil, and is a famous argument against the existence of an all-powerful and providential God or gods. As translated by David Hume in the Dialogues concerning N 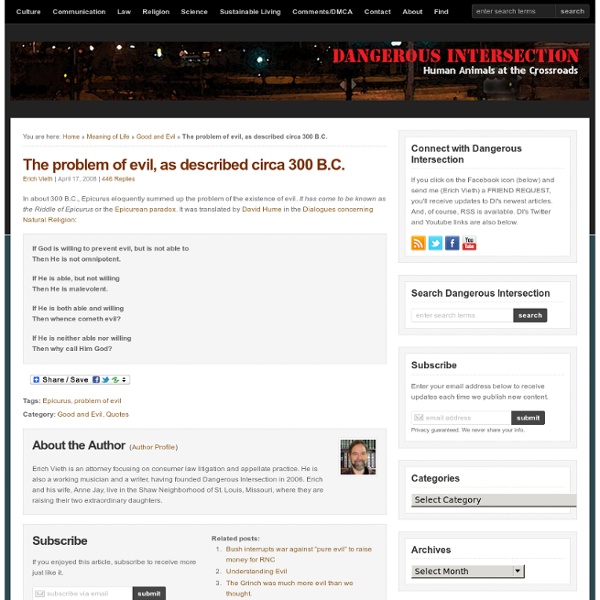 In about 300 B.C., Epicurus eloquently summed up the problem of the existence of evil. It has come to be known as the Riddle of Epicurus or the Epicurean paradox. It was translated by David Hume in the Dialogues concerning Natural Religion: If God is willing to prevent evil, but is not able to Then He is not omnipotent.If He is able, but not willing Then He is malevolent.If He is both able and willing Then whence cometh evil?If He is neither able nor willing Then why call Him God? Tags: Epicurus, problem of evil Category: Good and Evil, Quotes About the Author (Author Profile) Erich Vieth is an attorney focusing on consumer law litigation and appellate practice.

The BIGGEST ever list of design resources! : : ProofHQ – Product Blog Following the huge success of last year’s “World’s Biggest Ever List of Graphic Design Blogs”, we’ve decided that we should turn it into an annual event – after all, more people than ever before are blogging and the talent pool continues to grow. This year, we’ve added in some additional categories including typography and image sourcing sites to help you along your way. The list is at least 40% larger than last year and is the one stop shop for all that you could need in terms of inspiration, reference material or tools for you to use. So, without further ado, ladies and gentlemen…. drum-roll please! Understanding Evil It is a much mentioned, but little understood concept. Any individual in the world is likely to have strong conceptions of “evil,” but very few could define it, or ascribe a cause to it. Dictionary.com defines “evil” as “morally bad or wrong,” and also “causing ruin, injury or pain.”

Nietzsche Quotes: Truth and Knowledge There are no facts, only interpretations. from Nietzsche's Nachlass, A. Danto translation. Enemies of truth.-- Convictions are more dangerous enemies of truth than lies. Dimitri Tsykalov Russian artist Dimitri Tsykalov uses fruits to curve carve out impressive and creepy looking skulls. Have a look. Peter Sloterdijk Peter Sloterdijk (German: [ˈsloːtɐˌdaɪk]; born June 26, 1947) is a German philosopher, cultural theorist, television host and columnist. He is a professor of philosophy and media theory at the University of Art and Design Karlsruhe. He co-hosted the German show Im Glashaus: Das Philosophische Quartett until 2012. Biography[edit]

Seven Blunders of the World The Seven Social Sins, sometimes called the Seven Blunders of the World, is a list that Mohandas Karamchand Gandhi published in his weekly newspaper Young India on October 22, 1925.[1] Later, he gave this same list to his grandson Arun Gandhi, written on a piece of paper, on their final day together, shortly before his assassination.[2] The seven sins or blunders are: History and influence[edit] Mahatma Gandhi, who published the list in 1925 as a list of "Seven Social Sins" (1940s photo) The list was first published by Mohandas Karamchand Gandhi in his weekly newspaper Young India on October 22, 1925.[1] Gandhi wrote that a correspondent who he called a "fair friend" had sent the list: "The... fair friend wants readers of Young India to know, if they do not already, the following seven social sins,"[1] (the list was then provided). In the decades since its first publication, the list has been widely cited and/or discussed.

About TED TED is a global community, welcoming people from every discipline and culture who seek a deeper understanding of the world. We believe passionately in the power of ideas to change attitudes, lives and, ultimately, the world. On TED.com, we're building a clearinghouse of free knowledge from the world's most inspired thinkers — and a community of curious souls to engage with ideas and each other, both online and at TED and TEDx events around the world, all year long. In fact, everything we do — from our TED Talks videos to the projects sparked by the TED Prize, from the global TEDx community to the TED-Ed lesson series — is driven by this goal: How can we best spread great ideas? TED is owned by a nonprofit, nonpartisan foundation.