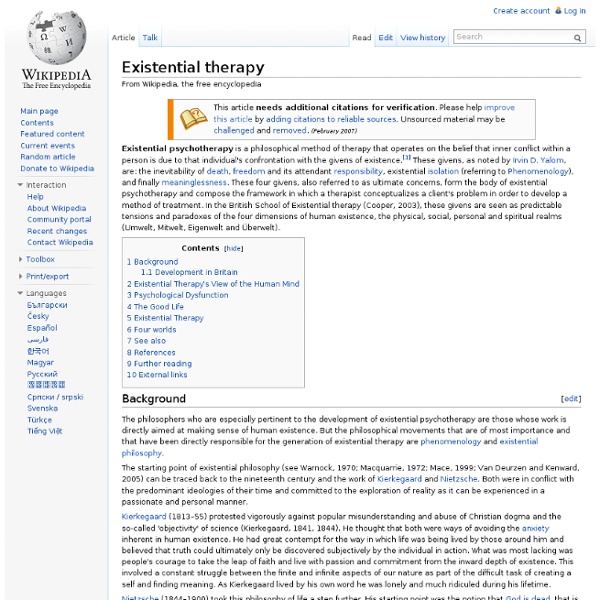 Background[edit] The starting point of existential philosophy (see Warnock, 1970; Macquarrie, 1972; Mace, 1999; Van Deurzen and Kenward, 2005) can be traced back to the nineteenth century and the work of Søren Kierkegaard and Friedrich Nietzsche. Both were in conflict with the predominant ideologies of their time and committed to the exploration of reality as it can be experienced in a passionate and personal manner. Kierkegaard (1813–55) protested vigorously against popular misunderstanding and abuse of Christian dogma and the so-called 'objectivity' of science (Kierkegaard, 1841, 1844). He thought that both were ways of avoiding the anxiety inherent in human existence. Nietzsche (1844–1900) took this philosophy of life a step further. Martin Heidegger (1889–1976) applied the phenomenological method to understanding the meaning of being (Heidegger, 1962, 1968). Development in Britain[edit] Existential therapy's view of the human mind[edit] Psychological dysfunction[edit] Four worlds[edit] Related:  Existentialism

Irvin D. Yalom Irvin David Yalom M.D. (born 13 June 1931) is an American existential psychiatrist who is emeritus professor of psychiatry at Stanford University, as well as author of both fiction and nonfiction. Early life[edit] Yalom was born in Washington DC.[1] About fifteen years prior to his birth in the United States, Yalom's parents immigrated from Russia and eventually opened a Washington DC grocery store on 1st Street and Seaton Place. Career[edit] After graduating with a BA from George Washington University in 1952 and as a Doctor of Medicine from Boston University School of Medicine in 1956 he went on to complete his internship at Mount Sinai Hospital in New York and his residency at the Phipps Clinic of Johns Hopkins Hospital in Baltimore and completed his training in 1960. In addition to his scholarly, non-fiction writing, Yalom has produced a number of novels and also experimented with writing techniques. He is married to Marilyn Yalom. Publications[edit] Novels and stories[edit] Awards[edit]

Humanistic psychology Humanistic psychology is a psychological perspective which rose to prominence in the mid-20th century in response to the limitations of Sigmund Freud's psychoanalytic theory and B.F. Skinner's behaviorism.[1] With its roots running from Socrates through the Renaissance, this approach emphasizes individuals inherent drive towards self-actualization and creativity. It typically holds that people are inherently good. It adopts a holistic approach to human existence and pays special attention to such phenomena as creativity, free will, and human potential. It encourages viewing ourselves as a "whole person" greater than the sum of our parts and encourages self exploration rather than the study of behavior in other people. In the 20th century humanistic psychology was referred to as the "third force" in psychology, distinct from earlier, even less humanistic approaches of psychoanalysis and behaviorism. Origins[edit] Conceptual origins[edit] Practical origins[edit] Counseling and therapy[edit]

Male gaze The male gaze is a concept coined by feminist film critic Laura Mulvey. It refers to the way visual arts are structured around a masculine viewer. It describes the tendency in visual culture to depict the world and women from a masculine point of view and in terms of men's attitudes.[1][2] The male gaze consists of three different gazes:[3][4] that of the person behind the camera,that of the characters within the representation or film itself, andthat of the spectator. Background[edit] The concept was first developed by feminist film critic Laura Mulvey in her 1975 essay entitled "Visual Pleasure and Narrative Cinema".[5] Mulvey posits that the gender power asymmetry is a controlling force in cinema and constructed for the pleasure of the male viewer, which is deeply rooted in patriarchal ideologies and discourses.[6] The concept has subsequently been prominent in feminist film theory, media studies, as well as communications and cultural studies. Criticizing the male gaze[edit]

Gaze Gaze means "to look steadily, intently, and with fixed attention."[1] In one sense, it is a term popularized by psychoanalyst Jacques Lacan for the anxious state that comes with the awareness that one can be viewed. The psychological effect, Lacan argues, is that the subject loses a degree of autonomy upon realizing that he or she is a visible object. It has also been called an aspect of one of the "most powerful human forces"; that is, "the meeting of the face and the gaze" because "Only there do we exist for one another History of the Lacan concept[edit] Systems of power and the gaze[edit] Michel Foucault first used the term "medical gaze" in The Birth of the Clinic to explain the process of medical diagnosis, power dynamics between doctors and patients, and the hegemony of medical knowledge in society. The gaze is not something one has or uses; rather, it is the relationship into which someone enters. The male gaze[edit] Imperial gaze[edit] E. Postcolonial gaze[edit] See also[edit]

Constructivist and Existential College Assistant Professor Eric Dodson Click here for voice (Approx. 187KB WAV file) "In sum, the heart of humanistic psychology is a matter of personal involvement in the struggle to fathom the meaning of being a human being... It's ultimately about coming to live more powerfully, more poetically... with a greater cognizance of our lot as human beings... It's about hearing the poetry in things, as well as learning to speak the poetry in things. "Those thinkers in whom all stars move in cyclic orbits are not the most profound. Eric received his B.S. in computer science from the Pennsylvania State University, his M.S. in computer science from the University of Delaware, and his M.A. and Ph. Click one of these to learn more about Eric's view of life, the universe and everything. Hobbies: Chess Music (playing guitar, bass, etc.) Influential books & authors: Click here to e-mail Eric Dodson Go back to the Psychology Home page.

Publications - Greg Madison, Existential Focusing Journals Existential Therapy: Legacy, Vibrancy and Dialogue. Available at Amazon by Barnett, L. and Madison, G. (eds.) (2011, Routledge). This is a major anniversary book on Existential Therapy with internationally renowned contributors including: Eugene Gendlin, Betty Canon, Ernesto Spinelli, Emmy van Deurzen, Alfried Längle, Maurice Freidman, Donna Orange and many other prominent existential therapists from Europe and North America… “This volume, whose list of contributors reads like a ‘Who’s Who’ in existential therapy, will leave the reader with no doubts about the influence and vitality of the existential tradition in a plurality of contemporary psychotherapeutic approaches.

Phenomenology - By Branch / Doctrine - The Basics of Philosophy Introduction | History of Phenomenology | Types of Phenomenology Phenomenology is a broad discipline and method of inquiry in philosophy, developed largely by the German philosophers Edmund Husserl and Martin Heidegger, which is based on the premise that reality consists of objects and events ("phenomena") as they are perceived or understood in the human consciousness, and not of anything independent of human consciousness. It can be considered a branch of Metaphysics and of Philosophy of Mind, although many of its proponents claim that it is related to, but distinct from, the other key disciplines in philosophy (Metaphysics, Epistemology, Logic and Ethics), and that it represents more a distinct way of looking at philosophy which has repercussions on all of these other fields. Phenomenology is the study of experience and how we experience. The term "phenomenology" is derived from the Greek "phainomenon", meaning "appearance". There are three main types of Phenomenology:

Existentialism 1. The Emergence of Existence as a Philosophical Problem Sartre's existentialism drew its immediate inspiration from the work of the German philosopher, Martin Heidegger. Heidegger's 1927 Being and Time, an inquiry into the “being that we ourselves are” (which he termed “Dasein,” a German word for existence), introduced most of the motifs that would characterize later existentialist thinking: the tension between the individual and the “public”; an emphasis on the worldly or “situated” character of human thought and reason; a fascination with liminal experiences of anxiety, death, the “nothing” and nihilism; the rejection of science (and above all, causal explanation) as an adequate framework for understanding human being; and the introduction of “authenticity” as the norm of self-identity, tied to the project of self-definition through freedom, choice, and commitment. 1.1 Kierkegaard: “The Single Individual” 1.2 Nietzsche and Nihilism 2. 2.1 Facticity and Transcendence 2.2 Alienation 3. 4.