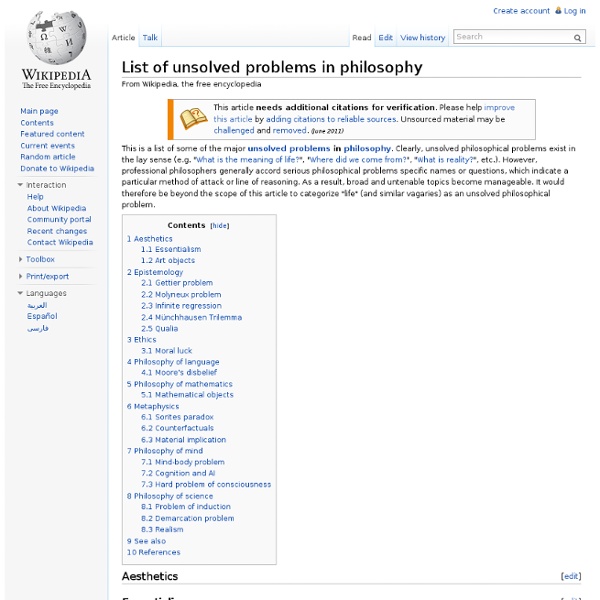 This is a list of some of the major unsolved problems in philosophy. Clearly, unsolved philosophical problems exist in the lay sense (e.g. "What is the meaning of life?", "Where did we come from?", "What is reality?", etc.). Aesthetics[edit] Essentialism[edit] In art, essentialism is the idea that each medium has its own particular strengths and weaknesses, contingent on its mode of communication. Art objects[edit] This problem originally arose from the practice rather than theory of art. While it is easy to dismiss these assertions, further investigation[who?] Epistemology[edit] Epistemological problems are concerned with the nature, scope and limitations of knowledge. Gettier problem[edit] In 1963, however, Edmund Gettier published an article in the periodical Analysis entitled "Is Justified True Belief Knowledge?" In response to Gettier's article, numerous philosophers have offered modified criteria for "knowledge." Infinite regression[edit] Molyneux problem[edit] Münchhausen trilemma[edit]

The Myth of Sisyphus The Myth of Sisyphus is a philosophical essay by Albert Camus. It comprises about 119 pages and was published originally in 1942 in French as Le Mythe de Sisyphe; the English translation by Justin O'Brien followed in 1955. In the essay, Camus introduces his philosophy of the absurd: man's futile search for meaning, unity, and clarity in the face of an unintelligible world devoid of God and eternal truths or values. Solipsism Solipsism ( i/ˈsɒlɨpsɪzəm/; from Latin solus, meaning "alone", and ipse, meaning "self")[1] is the philosophical idea that only one's own mind is sure to exist. As an epistemological position, solipsism holds that knowledge of anything outside one's own mind is unsure; the external world and other minds cannot be known and might not exist outside the mind.

List of thought processes Nature of thought[edit] Thought (or thinking) can be described as all of the following: An activity taking place in a: brain – organ that serves as the center of the nervous system in all vertebrate and most invertebrate animals (only a few invertebrates such as sponges, jellyfish, adult sea squirts and starfish do not have a brain). It is the physical structure associated with the mind. mind – abstract entity with the cognitive faculties of consciousness, perception, thinking, judgement, and memory. Having a mind is a characteristic of humans, but which also may apply to other life forms.[1][2] Activities taking place in a mind are called mental processes or cognitive functions.computer (see automated reasoning, below) – general purpose device that can be programmed to carry out a set of arithmetic or logical operations automatically. Types of thoughts[edit]

Allegory of the Cave Plato realizes that the general run of humankind can think, and speak, etc., without (so far as they acknowledge) any awareness of his realm of Forms. The allegory of the cave is supposed to explain this. In the allegory, Plato likens people untutored in the Theory of Forms to prisoners chained in a cave, unable to turn their heads. Timeline of Western philosophers A wide-ranging list of philosophers from the Western traditions of philosophy. Included are not only philosophers (Socrates, Plato), but also those who have had a marked importance upon the philosophy of the day. The list stops at the year 1950, after which philosophers fall into the category of Contemporary philosophy. Western and Middle Eastern philosophers[edit] Classical philosophers[edit]

Fourth dimension Fourth dimension may refer to: Science[edit] Four-dimensional space, the concept of a fourth dimensionSpacetime, the unification of time and space as a four-dimensional continuumMinkowski space, the mathematical setting for special relativity Literature[edit] Pascal's Wager Blaise Pascal Pascal's Wager is an argument in apologetic philosophy which was devised by the seventeenth-century French philosopher, mathematician, and physicist Blaise Pascal (1623–1662). It posits that humans all bet with their lives either that God exists or does not exist. Given the possibility that God actually does exist and assuming the infinite gain or loss associated with belief in God or with unbelief, a rational person should live as though God exists and seek to believe in God. Some Moral Dilemmas The Trolley Problem, not in Grassian. Suggested by Philippa Foot (1920-2010), daughter of Esther, the daughter of President Grover Cleveland, but of British birth because of her father, William Sidney Bence Bosanquet. A trolley is running out of control down a track. In its path are five people who have been tied to the track by a mad philosopher. Fortunately, you could flip a switch, which will lead the trolley down a different track to safety. Unfortunately, there is a single person tied to that track.