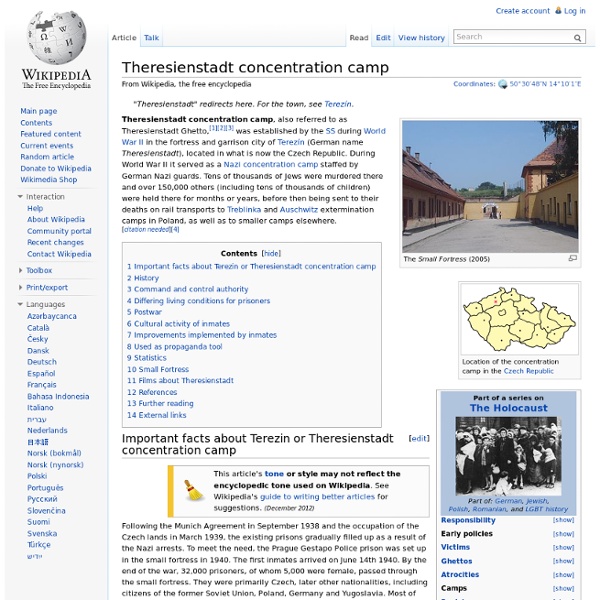 Coordinates : 50°30′48″N 14°10′1″E ﻿ / ﻿ 50.51333°N 14.16694°E ﻿ / 50.51333; 14.16694 The (2005) , also referred to as Theresienstadt Ghetto, [ 1 ] [ 2 ] [ 3 ] was established by the SS during World War II in the fortress and garrison city of Terezín (German name ), located in what is now the Czech Republic. During World War II it served as a Nazi concentration camp staffed in equal numbers by German Nazi guards and their ethnic Czech collaborators. Tens of thousands of Jews were murdered there and over 150,000 others (including tens of thousands of children) were held there for months or years, before then being sent to their deaths on rail transports to Treblinka and Auschwitz extermination camps in Poland, as well as to smaller camps elsewhere. [ edit ] History The fortress of Terezín was constructed between the years 1780 and 1790 by the orders of the Austrian emperor Joseph II in the north-west region of Bohemia . [ edit ] Command and control authority [ edit ] Used as propaganda tool

Czech Republic - Villa Tugendhat Functionalism in Villa Tugendhat Villa Tugendhat has borne witness to the birth of modern housing and also to the tragic fate of the people who lived there. This work by the famous German architect Mies van der Rohe is to this very day regarded as one of the four most important villas in the world. Thanks to its values, this gem of modern architecture has also been included in the UNESCO world heritage list. Villa Tugendhat in the Brno city district of Černá Pole was built at the request of Greta and Fritz Tugendhat who came from a rich textile trading family in Brno. The unsettled history of this architectural gem Mr. and Mrs. Timeless design of the villa The building evoked great emotion as soon as it was finished. Where else to set out for? Brno is the capital city of Moravia and as such offers many other monuments.

Czechoslovakia Czechoslovakia (or Czecho-Slovakia;[1] Czech and Slovak: Československo, Česko-Slovensko)[2] was a sovereign state in Central Europe that existed from October 1918, when it declared its independence from the Austro-Hungarian Empire, until its peaceful dissolution into Czechia and Slovakia on 1 January 1993. From 1939 to 1945, following its forced division and partial incorporation into Nazi Germany, the state did not de facto exist but its government-in-exile continued to operate. On 29 June 1945, a treaty was signed between Czechoslovakia and the Soviet Union, ceding Carpatho-Ukraine to the USSR. From 1948 to 1990 Czechoslovakia had a command or planned economy, which was disintegrated on 1 January 1991, removing price controls after a period of preparation. Basic characteristics[edit] The Czech lion in the small coat of arms Form of state Neighbours Topography The country was of generally irregular terrain. Climate Official names[edit] History[edit] Foundation[edit] Origins[edit] Founding[edit]

Czech Republic The Czech Republic ( i/ˈtʃɛk rɨˈpʌblɪk/ CHEK RƏPUBLIK;[10] Czech: Česká republika, pronounced [ˈt͡ʃɛskaː ˈrɛpuˌblɪka] ( ), short form Česko Czech pronunciation: [ˈt͡ʃɛsko]) is a landlocked country in Central Europe. The country is bordered by Germany to the west, Austria to the south, Slovakia to the east and Poland to the north. The Czech state, formerly known as Bohemia (Čechy), was formed in the late 9th century as a small duchy around Prague, at that time under the dominance of the powerful Great Moravian Empire. Following the Munich Agreement and the Polish annexation of Zaolzie, Czechoslovakia fell under German occupation during World War II. In 2006, the Czech Republic became first former member of the Comecon to achieve the status of a developed country according to the World Bank.[13] In addition, the country has the highest level of human development in Central and Eastern Europe,[14] ranking among the top 30 nations in the world. Etymology[edit] History[edit] Prehistory[edit]

Prague The Prague Astronomical Clock was first installed in 1410, making it the third-oldest astronomical clock in the world and the oldest one still working. Prague (/ˈprɑːɡ/; Czech: Praha pronounced [ˈpraɦa] ( )) is the capital and largest city of the Czech Republic. It is the fourteenth-largest city in the European Union.[6] It is also the historical capital of Bohemia. Situated in the north-west of the country on the Vltava River, the city is home to about 1.3 million people, while its larger urban zone is estimated to have a population of nearly 2 million.[4] The city has a temperate oceanic climate, with warm summers and chilly winters. Prague has been a political, cultural, and economic centre of central Europe with waxing and waning fortunes during its 1,100-year existence. The city boasts more than ten major museums, along with numerous theatres, galleries, cinemas, and other historical exhibits. History[edit] Early history[edit] A view of one of the bridge towers of the Charles Bridge

Hussite Wars The Hussite Wars, also called the Bohemian Wars or the Hussite Revolution, were fought between the Hussites (the followers of Bohemian priest and reformer Jan Hus) and various monarchs who sought to enforce the authority of the Roman Catholic Church against the Hussites, and also between Hussite factions. These wars lasted from 1419 to circa 1434. The Hussite community included most of the Czech population of the Kingdom of Bohemia, and formed a major military power. The fighting ended after 1434, when the moderate Utraquist faction of the Hussites defeated the radical Taborite faction. Origins[edit] Starting around 1402, priest and scholar Jan Hus denounced the corruption of the Church and the Papacy, and promoted the reformist ideas of English theologian John Wycliffe. In 1414, Sigismund of Hungary convened the Council of Constance to end the Schism and resolve other religious controversies. In spite of the departure of many prominent Hussites, the troubles at Prague continued. "1. 2.

Duchy of Bohemia The Duchy of Bohemia was formerly part of Great Moravia and became an independent principality in the 9th century. It became part of the Holy Roman Empire from the early 11th century. The Přemyslid dynasty which had ruled Bohemia since the 9th century remained in power throughout the High Middle Ages, until the extinction of the male line with the death of Wenceslaus III of Bohemia in 1306. The Duchy of Bohemia was raised to a kingdom under Ottokar I in 1198. History[edit] With the fragmentation of Great Moravia under the pressure of the Magyar incursions in the 9th century, Bohemia began to form as an independent principality from the 880s. Cut off from Byzantium by the Hungarian presence, the Bohemian Principality existed as independent state but in the shadow of the East Francia, the Dukes paid tribute in exchange for confirmation of the peace treaty. Boleslaus I, Duke of Bohemia, assumed the Bohemian throne in 935, conquered Moravia, Silesia and expanded farther to the east.

Charles IV, Holy Roman Emperor Charles IV (Czech: Karel IV., German: Karl IV., Latin: Carolus IV; 14 May 1316 – 29 November 1378[1]), born Wenceslaus,[2] was the second King of Bohemia from the House of Luxembourg, and the first King of Bohemia also to become Holy Roman Emperor. He was the eldest son and heir of King John of Bohemia, who died at the Battle of Crécy on 26 August 1346. Charles inherited the County of Luxembourg and the Kingdom of Bohemia from his father. On 11 July 1346, prince-electors elected him King of the Romans (rex Romanorum) in opposition to Emperor Louis IV. Life[edit] King of the Romans[edit] On 11 July 1346, in consequence of an alliance between his father and Pope Clement VI, relentless enemy of the emperor Louis IV, Charles was chosen as Roman king in opposition to Louis by some of the prince-electors at Rhens. Charles IV was initially in a very weak position in Germany. Charles initially worked to secure his power base. Holy Roman Emperor[edit] Evaluation and legacy[edit] Genealogy[edit]

History of Czechoslovakia With the collapse of the Habsburg monarchy at the end of World War I, the independent country of Czechoslovakia[1] (Czech, Slovak: Československo) was formed, encouraged by, among others, U.S. President Woodrow Wilson. The Czechs and Slovaks were not at the same level of economic and technological development, but the freedom and opportunity found in an independent Czechoslovakia enabled them to make strides toward overcoming these inequalities. Political history[edit] Historical settings to 1918[edit] Czechoslovak Legions in Vladivostok (1918) Czechoslovak lands within the Austro-Hungarian Empire according to the controversial 1910 census of the Kingdom of Hungary. The creation of Czechoslovakia in 1918 was the culmination of the 19th-century struggle of identity and ethnicity politics of a multi-ethnic, multi-linguisitic empire. Subject peoples all over the empire wanted to be free from the rule of the old aristocracy and imperial family. The First Republic (1918–1938)[edit]

Velvet Revolution Memorial plaque on Albertov (cs), the place where Velvet revolution started. Translation: when – if not now? who – if not us? Václav Havel honoring the deaths of those who took part in the Prague protest. Non-violent protesters facing armed policemen with flowers The Velvet Revolution (Czech: sametová revoluce) or Gentle Revolution (Slovak: nežná revolúcia) was a non-violent transition of power in what was then Czechoslovakia. On November 17, 1989 (International Students' Day), riot police suppressed a student demonstration in Prague.[2] That event sparked a series of demonstrations from November 19 to late December. In response to the collapse of other Warsaw Pact governments and the increasing street protests, the Communist Party of Czechoslovakia announced on November 28 that it would relinquish power and dismantle the single-party state. In June 1990, Czechoslovakia held its first democratic elections since 1946. Prior to the revolution[edit] Chronology[edit] November 16[edit]

The Good Soldier Švejk The Good Soldier Švejk (/ˈʃveɪk/; Czech: [ˈʃvɛjk]), also spelled Schweik or Schwejk, is the abbreviated title of an unfinished satirical/dark comedy novel by Jaroslav Hašek. The original Czech title of the work is Osudy dobrého vojáka Švejka za světové války, literally The Fateful Adventures of the Good Soldier Švejk During the World War. It is the most translated novel of Czech literature. Švejk has become the Czech national personification.[citation needed] The novel was originally illustrated by Josef Lada and more recently also by Czech illustrator Petr Urban.[1] Hašek originally intended Švejk to cover a total of six volumes, but had completed only three (and started on the fourth) upon his death from heart failure on January 3, 1923. Themes[edit] Lada's illustration of the rheumatic Švejk being wheeled off to war. The novel is set during World War I in Austria-Hungary, a multi-ethnic empire full of long-standing tensions. The character of Josef Švejk is a development of this theme.

Emperor Charles IV elected Greatest Czech of all time Charles IV, the 14th-century Holy Roman emperor and King of Bohemia has been making headlines lately. Just days after the news was released about the discovery of his original burial chamber at Prague Castle, Charles IV was elected the Greatest Czech of all time. Emperor Charles IV, photo: CTK Over 68,000 Czechs cast their votes for Emperor Charles IV in the final of the Czech version of the BBC's "Great Britons" poll broadcast on Czech Television. The emperor was followed by the founder of Czechoslovakia, President Tomas Garrigue Masaryk with 55,000 votes. The former Czech President Vaclav Havel came third with 52,000 votes, the only living personality on the shortlist of ten which was released at the beginning of May. Charles IV, who was born in 1316 in Prague and died here in 1378, was the son of John of Luxembourg and Eliska, the last member of the Bohemian Premyslid dynasty that founded the medieval Kingdom of Bohemia.