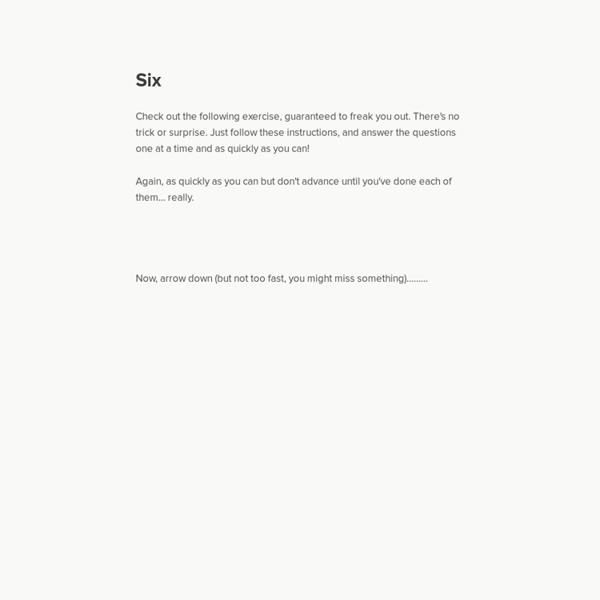 Check out the following exercise, guaranteed to freak you out. There's no trick or surprise. Just follow these instructions, and answer the questions one at a time and as quickly as you can! Again, as quickly as you can but don't advance until you've done each of them... really. Now, arrow down (but not too fast, you might miss something)......... What is:

5 Popular Beliefs That Are Holding Humanity Back Humans believe in a lot of stupid shit, and we do something stupid as a result of those beliefs about, oh, once every five seconds. And sure, most of you reading this are educated types who don't believe in Bigfoot or psychic readings, but there are a whole bunch of equally stupid/harmful superstitions out there that are so commonly held that we don't even think of them as such. Very few of us don't fall victim to at least a few of them. In fact, I'm something of an expert on this because I believe literally hundreds of idiotic things, and also because I wrote a ridiculous best-seller about an apocalypse brought about by people believing in apocalypses.

An afternoon nap markedly boosts the brain’s learning capacity If you see a student dozing in the library or a co-worker catching 40 winks in her cubicle, don’t roll your eyes. New research from the University of California, Berkeley, shows that an hour’s nap can dramatically boost and restore your brain power. Indeed, the findings suggest that a biphasic sleep schedule not only refreshes the mind, but can make you smarter. The Top 10 Psychology Studies of 2010 The end of 2010 fast approaches, and I'm thrilled to have been asked by the editors of Psychology Today to write about the Top 10 psychology studies of the year. I've focused on studies that I personally feel stand out, not only as examples of great science, but even more importantly, as examples of how the science of psychology can improve our lives. Each study has a clear "take home" message, offering the reader an insight or a simple strategy they can use to reach their goals , strengthen their relationships, make better decisions, or become happier. If you extract the wisdom from these ten studies and apply them in your own life, 2011 just might be a very good year. 1) How to Break Bad Habits If you are trying to stop smoking , swearing, or chewing your nails, you have probably tried the strategy of distracting yourself - taking your mind off whatever it is you are trying not to do - to break the habit.

The Six Different Types of Managers and How to Work with Their Styles - Bilingual & Hispanic jobs / career social networking by Resources for Humans Over a period of several years we have researched the different types of managers in Corporate America, and we have identified the following six types of bosses and their leadership styles. Read through the descriptions below to find your own manager and discover the best strategies for dealing with his/her particular management style. We encourage you to read through all the types, as it is most likely that your boss will be heavily identified with one type, but may have some characteristics and influences of the others.

Ensign Software - ESPL: Dances of the Planets The planets in the heavens move in exquisite orbital patterns, dancing to the Music of the Cosmos. There is more mathematical and geometric harmony than we realize. The idea for this article is from a book Larry Pesavento shared with me. The book, 'A Little Book of Coincidence' by John Martineau, illustrates the orbital patterns and several of their geometrical relationships. . Take the orbits of any two planets and draw a line between the two planet positions every few days. What Multitasking Does To Our Brains I can definitely understand how focusing on one task at a time allows you to be more productive. However, I also believe that you can benefit from taking a break after ~an hour of working on something, and then doing something else. Making progress on multiple different tasks in this way provides a similar feeling of high productivity, but also allows you to get a feel for exactly how much work you have on your plate. Obviously, not every task can be broken up into hour-long work sessions, but if I can diversify what I'm working on, I won't get bored of my work.In terms of making to-do lists, I've found that just making the old-fashioned, linear lists don't quite cut it for me anymore. One method I've found quite useful is the Eisenhower method, which is a 2x2 matrix that organizes your tasks by urgency v.s. importance. It's a nice, visual way to look at your tasks and choose which one to work on based on how necessary it is to complete at that point in time.

List of common misconceptions From Wikipedia, the free encyclopedia This incomplete list is not intended to be exhaustive. This list corrects erroneous beliefs that are currently widely held about notable topics. Neuroticism Emotional stability[edit] At the opposite end of the spectrum, individuals who score low in neuroticism are more emotionally stable and less reactive to stress. They tend to be calm, even-tempered, and less likely to feel tense or rattled. Although they are low in negative emotion, they are not necessarily high on positive emotion.