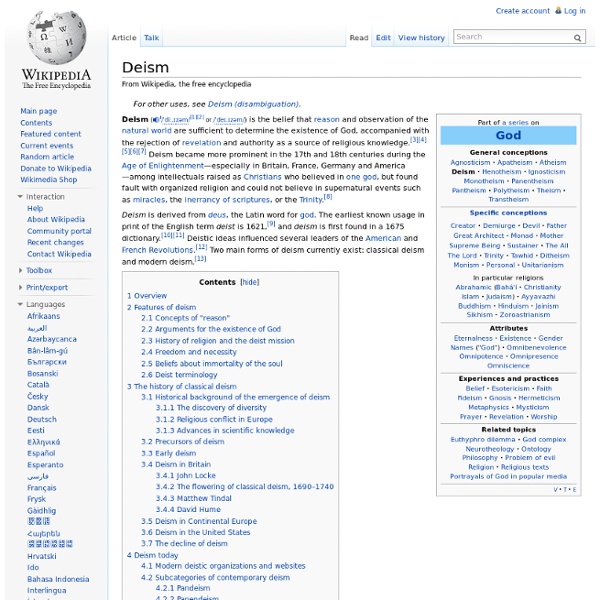 Deism ( i/ˈdiː.ɪzəm/[1][2] or /ˈdeɪ.ɪzəm/) is the belief that reason and observation of the natural world are sufficient to determine the existence of a Creator, accompanied with the rejection of revelation and authority as a source of religious knowledge.[3][4][5][6][7] Deism gained prominence in the 17th and 18th centuries during the Age of Enlightenment—especially in Britain, France, Germany, and the United States—among intellectuals raised as Christians who believed in one god, but found fault with organized religion and did not believe in supernatural events such as miracles, the inerrancy of scriptures, or the Trinity.[8] Deism is derived from deus, the Latin word for god. Deistic ideas influenced several leaders of the American and French Revolutions.[9] Two main forms of deism currently exist: classical deism and modern deism.[10] Overview[edit] Deism is a theological position concerning the relationship between "the Creator" and the natural world. Features of deism[edit] M.

Apatheism Apatheism (/ˌæpəˈθiːɪzəm/ a portmanteau of apathy and theism/atheism), also known as pragmatic atheism or (critically) as practical atheism, is acting with apathy, disregard, or lack of interest towards belief or disbelief in a deity. Apatheism describes the manner of acting towards a belief or lack of a belief in a deity, so it applies to both theism and atheism. An apatheist is also someone who is not interested in accepting or denying any claims that gods exist or do not exist. In other words, an apatheist is someone who considers the question of the existence of gods as neither meaningful nor relevant to their life. Apathetic agnosticism (also called pragmatic agnosticism) claims that no amount of debate can prove or disprove the existence of one or more deities, and if one or more deities exist, they do not appear to be concerned about the fate of humans. Apatheists hold that if it were possible to prove that God does or does not exist, their behavior would not change.[2]

Henotheism Henotheism (Greek εἷς θεός heis theos "one god") is the belief in and worship of a single God while accepting the existence or possible existence of other deities that may also be worshipped. The term was originally coined by Friedrich Wilhelm Joseph von Schelling (1775–1854) to depict early stages of monotheism. Max Müller (1823–1900), a German philologist and orientalist, brought the term into common usage.[1] Müller made the term central to his criticism of Western theological and religious exceptionalism (relative to Eastern religions), focusing on a cultural dogma which held "monotheism" to be both fundamentally well-defined and inherently superior to differing conceptions of God. Definition and terminology[edit] Henotheism is closely related to the theistic concept of monolatry, which is also the worship of one god among many. Hinduism[edit] The term "henotheism" was first coined to describe the theology of Rigvedic religion. Hellenistic religion[edit] See also[edit] References[edit]

Agnosticism Agnosticism is the view that the truth values of certain claims—especially claims about the existence or non-existence of any deity, as well as other religious and metaphysical claims—are unknown or unknowable.[1][2][3] According to the philosopher William L. Rowe, in the popular sense, an agnostic is someone who neither believes nor disbelieves in the existence of a deity or deities, whereas a theist and an atheist believe and disbelieve, respectively.[2] Thomas Henry Huxley, an English biologist, coined the word agnostic in 1869. Since the time that Huxley coined the term, many other thinkers have extensively written about agnosticism. Defining agnosticism[edit] Thomas Henry Huxley said:[11][12] Agnosticism, in fact, is not a creed, but a method, the essence of which lies in the rigorous application of a single principle ... According to philosopher William L. Etymology[edit] Early Christian church leaders used the Greek word gnosis (knowledge) to describe "spiritual knowledge".

Monolatrism Monolatrism or monolatry (Greek: μόνος (monos) = single, and λατρεία (latreia) = worship) is the recognition of the existence of many gods, but with the consistent worship of only one deity.[1] The term was perhaps first used by Julius Wellhausen.[citation needed] Monolatry is distinguished from monotheism, which asserts the existence of only one god, and henotheism, a religious system in which the believer worships one god alone without denying that others may worship different gods with equal validity.[2] Atenism[edit] Main article: Atenism The Egyptians had an aberrant period of some form of monotheism during the New Kingdom, in which the pharaoh Akhenaten abolished the official worship of other gods in favor of the sun-disk Aten. In ancient Israel[edit] Recognized scholars have formulated a substantial case for ancient Israel's practice of monolatry.[3] "The highest claim to be made for Moses is that he was, rather than a monotheist, a monolatrist. ... In Christianity[edit] Jeffrey R.

Monotheism Monotheism characterizes the traditions of Atenism, Babism, the Bahá'í Faith, Cao Dai (Caodaiism), Cheondoism (Cheondogyo), Christianity, Deism, Eckankar, Islam, Judaism, Rastafarianism, Ravidassia religion, Seicho no Ie, Shaivism, Sikhism, Tenrikyo (Tenriism), Vaishnavism, and Zoroastrianism and elements of the belief are discernible in numerous other religions.[4] Origin and development[edit] The word monotheism comes from the Greek μόνος (monos)[5] meaning "single" and θεός (theos)[6] meaning "god".[7] The English term was first used by Henry More (1614–1687).[8] Monolatrism can be a stage in the development of monotheism from polytheism. Three examples of this are the Aten cult in the reign of the Egyptian pharaoh Akhenaten, the rise of Marduk from the tutelary of Babylon to the claim of universal supremacy, and the rise of Yahweh from among the Israelite gods to the sole God of later Judaism.[11] In Zoroastrianism, Ahura Mazda appears as a supreme and transcendental deity.

Panentheism Panentheism (from Greek πᾶν (pân) "all"; ἐν (en) "in"; and θεός (theós) "God"; "all-in-God") is a belief system which posits that the divine (be it a monotheistic God, polytheistic gods, or an eternal cosmic animating force[1]) interpenetrates every part of nature and timelessly extends beyond it. Panentheism differentiates itself from pantheism, which holds that the divine is synonymous with the universe.[2] Unlike pantheism, panentheism maintains the identity and significance of the non-divine in the world.[3] Ancient panentheism[edit] In the Americas (Pre-European)[edit] According to Charles C. Mann's, "1491", only the lower classes of Aztec society were polytheistic. In Europe[edit] Modern philosophy[edit] The German philosopher Karl Christian Friedrich Krause (1781–1832) seeking to reconcile monotheism and pantheism, coined the term panentheism ("all in God") in 1828. In religion[edit] Bahá'í Faith[edit] Christianity[edit] Eastern Christianity[edit] Other Christian panentheists[edit]

Pantheism Pantheism is the belief that the universe (or nature as the totality of everything) is identical with divinity,[1] or that everything composes an all-encompassing, immanent God.[2] Pantheists thus do not believe in a distinct personal or anthropomorphic god.[3] Some Eastern religions are considered to be pantheistically inclined. Definitions[edit] Pantheism is derived from the Greek roots pan (meaning "all") and theos (meaning "God"). There are a variety of definitions of pantheism. As a religious position, some describe pantheism as the polar opposite of atheism.[5] From this standpoint, pantheism is the view that everything is part of an all-encompassing, immanent God.[2] All forms of reality may then be considered either modes of that Being, or identical with it.[7] Others hold that pantheism is a non-religious philosophical position. History[edit] The philosophy of Baruch Spinoza is often regarded as pantheism, although he did not use that term.[4][23] Recent developments[edit] "Mr.

Polytheism Polytheism is a religious construct and a type of theism. Within theism, it contrasts with monotheism, the belief in a singular God. Polytheists do not always worship all the gods equally, but can be henotheists, specializing in the worship of one particular deity. Other polytheists can be kathenotheists, worshiping different deities at different times. Polytheism was the typical form of religion during the Bronze Age and Iron Age, up to the Axial Age and the gradual development of monotheism or pantheism, and atheism. Terminology[edit] The term comes from the Greek poly ("many") and theoi ("gods") and was first invented by the Jewish writer Philo of Alexandria to argue with the Greeks. Gods and divinity[edit] Types of deities[edit] Types of deities often found in polytheism may include Mythology and religion[edit] In the Classical era, Sallustius (4th century CE) categorised mythology into five types: TheologicalPhysicalPsychologicalMaterialMixed Historical polytheism[edit] Neolithic Era

Theism Gods in the Triumph of Civilization Theism, in the broadest sense, is the belief that at least one deity exists.[1] In a more specific sense, theism is commonly a monotheistic doctrine concerning the nature of a deity, and that deity's relationship to the universe.[2][3][4][5] Theism, in this specific sense, conceives of God as personal, present and active in the governance and organization of the world and the universe. As such theism describes the classical conception of God that is found in Christianity, Judaism, Islam, Sikhism and Hinduism. The use of the word theism to indicate this classical form of monotheism began during the scientific revolution of the seventeenth century in order to distinguish it from the then-emerging deism which contended that God, though transcendent and supreme, did not intervene in the natural world and could be known rationally but not via revelation.[6] The term theism derives from the Greek theos meaning "god". Types[edit] Monotheism[edit] Deism[edit]