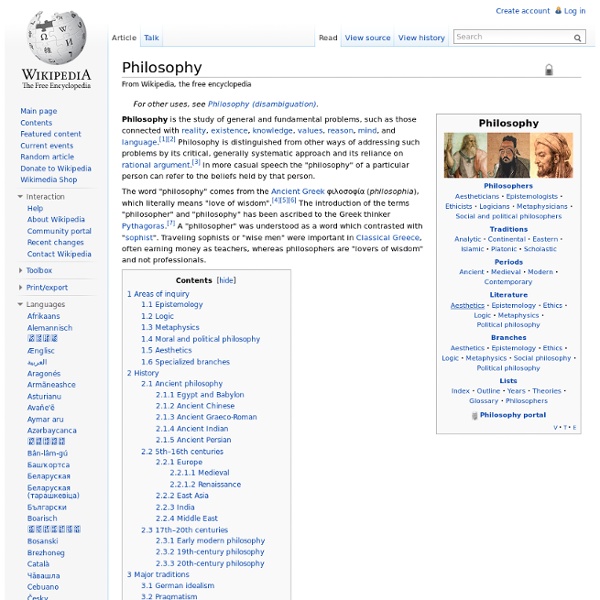 Philosophy is the study of general and fundamental problems, such as those connected with reality, existence, knowledge, values, reason, mind, and language.[1][2] Philosophy is distinguished from other ways of addressing such problems by its critical, generally systematic approach and its reliance on rational argument.[3] In more casual speech, by extension, "philosophy" can refer to "the most basic beliefs, concepts, and attitudes of an individual or group".[4] The word "philosophy" comes from the Ancient Greek φιλοσοφία (philosophia), which literally means "love of wisdom".[5][6][7] The introduction of the terms "philosopher" and "philosophy" has been ascribed to the Greek thinker Pythagoras.[8] Areas of inquiry Philosophy is divided into many sub-fields. These include epistemology, logic, metaphysics, ethics, and aesthetics.[9][10] Some of the major areas of study are considered individually below. Epistemology Rationalism is the emphasis on reasoning as a source of knowledge. Logic

Related:  The problems with philosophy • -

Higher-order logic The term "higher-order logic", abbreviated as HOL, is commonly used to mean higher-order simple predicate logic. Here "simple" indicates that the underlying type theory is simple, not polymorphic or dependent.[1] Quantification scope[edit] First-order logic quantifies only variables that range over individuals; second-order logic, in addition, also quantifies over sets; third-order logic also quantifies over sets of sets, and so on. City-state Independent or autonomous entity whose territory consists of a city A city-state is a sovereign state, also described as a type of small independent country, that usually consists of a single city and its dependent territories. Historically, this included cities such as Rome, Athens, Carthage,[1] and the Italian city-states during the Renaissance. As of 2019[update], only a handful of sovereign city-states exist, with some disagreement as to which are city-states.

Plato - Philosopher Plato (/ˈpleɪtoʊ/; Greek: Πλάτων Plátōn "broad"pronounced [plá.tɔːn] in Classical Attic; 428/427 or 424/423 – 348/347 BCE) was a philosopher, as well as mathematician, in Classical Greece. He is considered an essential figure in the development of philosophy, especially the Western tradition, and he founded the Academy in Athens, the first institution of higher learning in the Western world. Along with his teacher Socrates and his most famous student, Aristotle, Plato laid the foundations of Western philosophy and science.[2] Alfred North Whitehead once noted: "the safest general characterization of the European philosophical tradition is that it consists of a series of footnotes to Plato." Plato's dialogues have been used to teach a range of subjects, including philosophy, logic, ethics, rhetoric, religion and mathematics. His lasting themes include Platonic love, the theory of forms, the five regimes, innate knowledge, among others.

Geography Geography (from Greek γεωγραφία, geographia, lit. "earth description"[1]) is a field of science dedicated to the study of the lands, the features, the inhabitants, and the phenomena of the Earth.[2] A literal translation would be "to describe or write about the Earth". The first person to use the word "geography" was Eratosthenes (276–194 BC).[3] Four historical traditions in geographical research are spatial analysis of the natural and the human phenomena (geography as the study of distribution), area studies (places and regions), study of the man-land relationship, and research in the Earth sciences.[4] Nonetheless, modern geography is an all-encompassing discipline that foremost seeks to understand the Earth and all of its human and natural complexities - not merely where objects are, but how they have changed and come to be. Geography has been called "the world discipline" and "the bridge between the human and the physical science". Introduction

Philosophy Study Guide All written assignments should be submitted in the designated form, and should include a clear indication of the course and assignment number. Be sure to observe the designated due date; work that is turned in late will automatically receive a significantly reduced grade. It is reasonable to expect any assignment prepared outside class to be written well, with careful attention to grammar, spelling, and usage. Philosophical writing should avoid offensive sexual, racial, ethnic, religious, and material or physical bias.

Model theory This article is about the mathematical discipline. For the informal notion in other parts of mathematics and science, see Mathematical model. Model theory recognises and is intimately concerned with a duality: It examines semantical elements (meaning and truth) by means of syntactical elements (formulas and proofs) of a corresponding language. Justice Concept of moral fairness and administration of the law Harmony[edit] In his dialogue Republic, Plato uses Socrates to argue for justice that covers both the just person and the just City State. Justice is a proper, harmonious relationship between the warring parts of the person or city. Hence, Plato's definition of justice is that justice is the having and doing of what is one's own. A just man is a man in just the right place, doing his best and giving the precise equivalent of what he has received.

Socrates - Philosopher Socrates (/ˈsɒkrətiːz/;[2] Greek: Σωκράτης [sɔːkrátɛːs], Sōkrátēs; 470/469 – 399 BC)[1] was a classical Greek (Athenian) philosopher credited as one of the founders of Western philosophy. He is an enigmatic figure known chiefly through the accounts of classical writers, especially the writings of his students Plato and Xenophon and the plays of his contemporary Aristophanes. Plato's dialogues are among the most comprehensive accounts of Socrates to survive from antiquity, though it is unclear the degree to which Socrates himself is "hidden behind his 'best disciple', Plato".[3] Through his portrayal in Plato's dialogues, Socrates has become renowned for his contribution to the field of ethics, and it is this Platonic Socrates who lends his name to the concepts of Socratic irony and the Socratic method, or elenchus. Socratic problem Nothing written by Socrates remains extant.