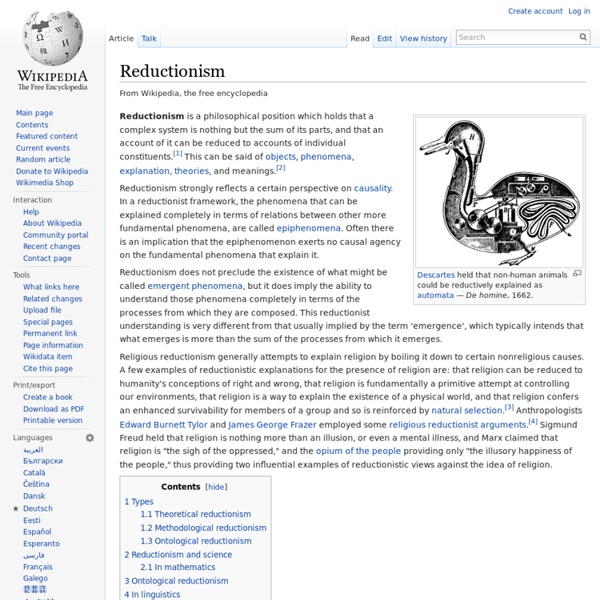 Descartes held that non-human animals could be reductively explained as automata — De homine, 1662. Reductionism strongly reflects a certain perspective on causality. In a reductionist framework, the phenomena that can be explained completely in terms of relations between other more fundamental phenomena, are called epiphenomena. Often there is an implication that the epiphenomenon exerts no causal agency on the fundamental phenomena that explain it. Reductionism does not preclude the existence of what might be called emergent phenomena, but it does imply the ability to understand those phenomena completely in terms of the processes from which they are composed. Religious reductionism generally attempts to explain religion by boiling it down to certain nonreligious causes. Types[edit] Richard H. Theoretical reductionism[edit] Theoretical reduction is the process by which one theory absorbs another. Methodological reductionism[edit] Ontological reductionism[edit] In mathematics[edit] Related:  The problems with philosophy

Achieve - Happiness Happiness is a mental or emotional state of well-being defined by positive or pleasant emotions ranging from contentment to intense joy.[1] A variety of biological, psychological, religious, and philosophical approaches have striven to define happiness and identify its sources. Various research groups, including positive psychology, are employing the scientific method to research questions about what "happiness" is, and how it might be attained. The United Nations declared 20 March the International Day of Happiness to recognise the relevance of happiness and wellbeing as universal goals. Definition Philosophers and religious thinkers often define happiness in terms of living a good life, or flourishing, rather than simply as an emotion. Happiness is a fuzzy concept and can mean many different things to many people. Research results Meditation has been found to lead to high activity in the brain's left prefrontal cortex, which in turn has been found to correlate with happiness.[11] Buddhism

Reductionism in Biology, SEOP First published Tue May 27, 2008; substantive revision Mon Apr 30, 2012 Reductionism encompasses a set of ontological, epistemological, and methodological claims about the relations between different scientific domains. The basic question of reduction is whether the properties, concepts, explanations, or methods from one scientific domain (typically at higher levels of organization) can be deduced from or explained by the properties, concepts, explanations, or methods from another domain of science (typically one about lower levels of organization). In recent philosophy of biology (1970s to the 1990s), the primary debate about reduction has focused on the question of whether and in what sense classical genetics can be reduced to molecular biology. 1. We reduce and reduce and reduce, but the habits of anthropomorphism and metaphor are hard to kill. Reduction (reductionism) encompasses several, related philosophical themes. 2.

Achieve - Hipster (1940s subculture) Bing Crosby in 1942 In 1939, the word hepster was used by Cab Calloway in the title of his Hepster's Dictionary, which defines hep cat as "a guy who knows all the answers, understands jive". In 1944, pianist Harry Gibson modified this to hipster[2] in his short glossary "For Characters Who Don't Dig Jive Talk," published in 1944 with the album Boogie Woogie In Blue, featuring the self-titled hit "Handsome Harry the Hipster".[3] The entry for hipsters defined them as "characters who like hot jazz." In his book Jazz: A History (1977), Frank Tirro defines the 1940s hipster: To the hipster, Bird was a living justification of their philosophy. Marty Jezer, in The Dark Ages: Life in the United States 1945–1960 (1999), provides another definition: The hipster world that Kerouac and Ginsberg drifted in and out of from the mid-1940s to the early-1950s was an amorphous movement without ideology, more a pose than an attitude; a way of "being" without attempting to explain why.

Reductionism,IEOP Reductionists are those who take one theory or phenomenon to be reducible to some other theory or phenomenon. For example, a reductionist regarding mathematics might take any given mathematical theory to be reducible to logic or set theory. Or, a reductionist about biological entities like cells might take such entities to be reducible to collections of physico-chemical entities like atoms and molecules. The type of reductionism that is currently of most interest in metaphysics and philosophy of mind involves the claim that all sciences are reducible to physics. In the twentieth century, most philosophers considered the question of the reduction of theories to be prior to the question of the reduction of entities or phenomena. Table of Contents 1. In what follows, the theory to be reduced will always be referred to as the target theory (T). There are three main ways in which reduction has been understood since the 1920s. a. So, Carnap’s main reductionist thesis is that: b. Therefore, c.

Statement Statement or statements may refer to: Reality Not to be confused with Realty. Philosophers, mathematicians, and other ancient and modern thinkers, such as Aristotle, Plato, Frege, Wittgenstein, and Russell, have made a distinction between thought corresponding to reality, coherent abstractions (thoughts of things that are imaginable but not real), and that which cannot even be rationally thought. By contrast existence is often restricted solely to that which has physical existence or has a direct basis in it in the way that thoughts do in the brain. Reality is often contrasted with what is imaginary, delusional, (only) in the mind, dreams, what is false, what is fictional, or what is abstract. The truth refers to what is real, while falsity refers to what is not. Related concepts World views and theories A common colloquial usage would have reality mean "perceptions, beliefs, and attitudes toward reality," as in "My reality is not your reality." Many of the concepts of science and philosophy are often defined culturally and socially.

Achieve - Cognitive behavioral therapy CBT has been demonstrated to be effective for the treatment of a variety of conditions, including mood, anxiety, personality, eating, substance abuse, tic, and psychotic disorders. Many CBT treatment programs for specific disorders have been evaluated for efficacy; the health-care trend of evidence-based treatment, where specific treatments for symptom-based diagnoses are recommended, has favored CBT over other approaches such as psychodynamic treatments.[3] However, other researchers have questioned the validity of such claims to superiority over other treatments.[4][5] History[edit] Philosophical roots[edit] Precursors of certain fundamental aspects of CBT have been identified in various ancient philosophical traditions, particularly Stoicism.[6] For example, Aaron T. Behavior therapy roots[edit] At the same time this of Eysenck's work, B.F. The emphasis on behavioral factors constituted the "first wave" of CBT.[15] Cognitive therapy roots[edit] Behavior and Cognitive Therapies Merge[edit]

Metaphysics Metaphysics is a traditional branch of philosophy concerned with explaining the fundamental nature of being and the world that encompasses it,[1] although the term is not easily defined.[2] Traditionally, metaphysics attempts to answer two basic questions in the broadest possible terms:[3] Ultimately, what is there?What is it like? Prior to the modern history of science, scientific questions were addressed as a part of metaphysics known as natural philosophy. Originally, the term "science" (Latin scientia) simply meant "knowledge". Etymology[edit] However, once the name was given, the commentators sought to find intrinsic reasons for its appropriateness. There is a widespread use of the term in current popular literature which replicates this understanding, i.e. that the metaphysical equates to the non-physical: thus, "metaphysical healing" means healing by means of remedies that are not physical.[8] Central questions[edit] Cosmology and cosmogony[edit] Determinism and free will[edit] [edit]

For All Practical Purposes Usually, when a physicist makes an approximation - which can't be justified on rigorous grounds - he tends to justify it by saying that the results obtained are good for all practical purposes (FAPP), meaning that they agree with our experience and approximation errors cannot be detected in practical measurements (for instance, if the error is smaller than the measurement resolution). FAPP theories are incomplete or lackly-based theories that nevertheless have very high agreement with experiments and tend to be very useful for all practical purposes.

Holism is sometimes seen as being the opposite of reductionism. Reductionism argues that the way of solving a large problem is to define it as a series of smaller problems which may be solved separately and the sum of the solutions will represent the solution of the larger problem. Holism asserts that some problems are not amenable to reductionist approaches and these need to be studied or researched in a different way. A holistic orientated researcher will also argue that if a research problem is reduced to smaller problems than a simple summation of the findings of the smaller solutions may not adequately answer the greater or larger problem.