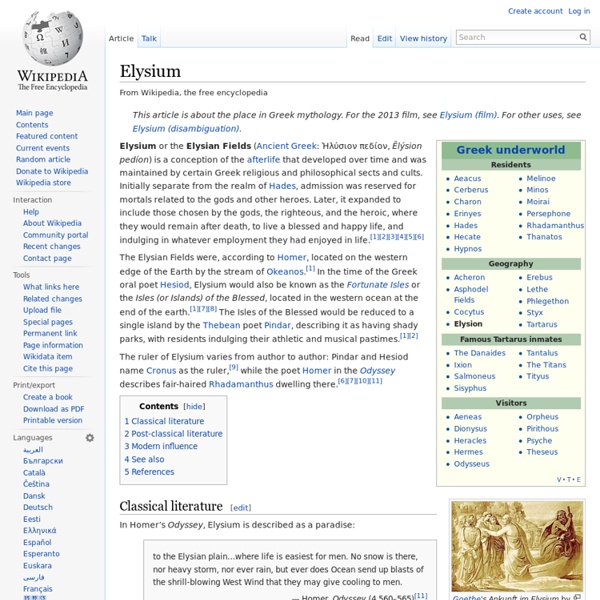 Elysium or the Elysian Fields (Ancient Greek: Ἠλύσιον πεδίον, Ēlýsion pedíon) is a conception of the afterlife that developed over time and was maintained by certain Greek religious and philosophical sects and cults. Initially separate from the realm of Hades, admission was reserved for mortals related to the gods and other heroes. Later, it expanded to include those chosen by the gods, the righteous, and the heroic, where they would remain after death, to live a blessed and happy life, and indulging in whatever employment they had enjoyed in life.[1][2][3][4][5][6] The ruler of Elysium varies from author to author: Pindar and Hesiod name Cronus as the ruler,[9] while the poet Homer in the Odyssey describes fair-haired Rhadamanthus dwelling there.[6][7][10][11] Classical literature[edit] In Homer’s Odyssey, Elysium is described as a paradise: to the Elysian plain…where life is easiest for men. Pindar's Odes describes the reward waiting for those living a righteous life: See also[edit]

Irish Soma Many scholars believe that the Indo-Europeans used an entheogenic or psychedelic drug in their rituals -- called soma amongst the Vedic people of India, and haoma in Iran. The ancient Greeks also used an ergot-based preparation in wine as the entheogenic trigger of the Eleusinian Mysteries. Soma has been identified as amanita muscaria or the fly agaric mushroom; haoma may have been the same, or it might be "wild rue," a harmaline-containing shrub (see Bibliography under Flattery and Schwartz). If there's any truth to these theories, we would expect to find that other Indo-European peoples also used such drugs shamanically or ritually. I consider it strange that in all the writing I've read about psychedelics, and about Ireland, not one text has connected the two subjects. Irish myths and legends were not written down till the Christian era, and then only by monks who might well have misunderstood or even censored any references to a soma-type substance or cult. St.

To Life! Death and the Afterlife in Ancient Hebrew Religion - TheoCenTriC To Life! A Survey of Death and the Afterlife in Ancient Hebrew Religion Our contemporary views of death and the afterlife are largely influenced by ancient Greek philosophy and not by the Hebrew tradition. When we speak of the immortality of the soul, salvation as the soul's escape from the body, or when we picture the afterlife as a purely spiritual, non-corporeal reality, we reveal our Greek influences. Why is this important? The second Temple was completed in 516 B.C. following the Jewish exile from Babylonian captivity and destroyed in 70 A.D. by the Romans. When we begin to look at Second Temple Judaism, we discover a variegated landscape. Prior to this time, the dominant Hebrew picture of the afterlife was far from appealing. Sheol The dominant image of the afterlife in the Hebrew Bible is that of Sheol (Hebrew) or Hades (Greek). "In biblical Jewish thought the dead do not vanish and turn into nothingness. Do you work wonders for the dead? We will come back to these questions.

LUGHNASA © Anna Franklin Lughnasa, make known its dues, In each distant year: Tasting every famous fruit, Food of herbs at Lammas Day. Most Pagans know Lughnasa as one of the eight annual festivals but, historically, British witches were unique in celebrating Lughnasa. Lughnasa is a harvest festival, marking the end of the period of summer growth and the beginning of the autumn harvest. Assemblies on hilltops are a traditional part of the proceedings. The massive man-made Silbury Hill, 130 feet high, was in Neolithic times nearly 4,600 years ago. Lughnasa was a day for visiting wells and those on the Isle of Man were said to be at the peak of their healing powers. Late July and month of August are traditionally times for fairs; the weather would usually be mild and the ground suitable for travelling. Many traditional summer fairs are called 'wake fairs'. Even today the Irish still associate equine activities with this time of the year. to mind the deaths of both the Irish Lugh and the Welsh Llew.

Roman mythology Roman mythology is the body of traditional stories pertaining to ancient Rome's legendary origins and religious system, as represented in the literature and visual arts of the Romans. "Roman mythology" may also refer to the modern study of these representations, and to the subject matter as represented in the literature and art of other cultures in any period. The Romans usually treated their traditional narratives as historical, even when these have miraculous or supernatural elements. The stories are often concerned with politics and morality, and how an individual's personal integrity relates to his or her responsibility to the community or Roman state. Heroism is an important theme. The study of Roman religion and myth is complicated by the early influence of Greek religion on the Italian peninsula during Rome's protohistory, and by the later artistic imitation of Greek literary models by Roman authors. The nature of Roman myth[edit] Founding myths[edit] Other myths[edit]

The Ancient Greek Underworld and Hades What happens after you die? If you were an ancient Greek, but not too deep-thinking a philosopher, the chances are you would have thought you went to Hades or the Greek Underworld. The Afterlife or Hereafter in the mythology of ancient Greece and Rome takes place in an area often referred to as the Underworld or Hades (although sometimes the location is described as a distant portion of the earth): the Underworld, because it is in the sunless regions under the earth, or Hades' realm (or Hades) because the Underworld was Hades' third of the cosmos, just as the sea was the god Poseidon's (Neptune, to the Romans) and the sky, the god Zeus' (Jupiter, to the Romans). Underworld Myths Perhaps the most familiar story about the Underworld is that of Hades' taking an unwilling young goddess Persephone below the earth to live with him as his queen. Nekuia Several myths involve a voyage to the Underworld (nekuia*) to obtain information. "Life" in the Underworld - A Shadowy Existence

Pan (god) In Greek religion and mythology, Pan (/ˈpæn/;[1] Ancient Greek: Πᾶν, Pān) is the god of the wild, shepherds and flocks, nature of mountain wilds, hunting and rustic music, and companion of the nymphs.[2] His name originates within the Ancient Greek language, from the word paein (πάειν), meaning "to pasture."[3] He has the hindquarters, legs, and horns of a goat, in the same manner as a faun or satyr. With his homeland in rustic Arcadia, he is recognized as the god of fields, groves, and wooded glens; because of this, Pan is connected to fertility and the season of spring. The Roman Faunus, a god of Indo-European origin, was equated with Pan. The worship of Pan began in Arcadia which was always the principal seat of his worship. Representations of Pan on 4th century BC gold and silver Pantikapaion coins One of the famous myths of Pan involves the origin of his pan flute, fashioned from lengths of hollow reed. Pan is famous for his sexual powers, and is often depicted with a phallus.

Moai Moai facing inland at Ahu Tongariki, restored by Chilean archaeologist Claudio Cristino in the 1990s Moai i/ˈmoʊ.aɪ/, or mo‘ai, are monolithic human figures carved by the Rapa Nui people from rock on the Chilean Polynesian island of Easter Island between the years 1250 and 1500.[1] Nearly half are still at Rano Raraku, the main moai quarry, but hundreds were transported from there and set on stone platforms called ahu around the island's perimeter. The production and transportation of the 887 statues[3] are considered remarkable creative and physical feats.[4] The tallest moai erected, called Paro, was almost 10 metres (33 ft) high and weighed 82 tons;[5] the heaviest erected was a shorter but squatter moai at Ahu Tongariki, weighing 86 tons; and one unfinished sculpture, if completed, would have been approximately 21 metres (69 ft) tall with a weight of about 270 tons. Description[edit] The moai are monolithic statues, their minimalist style related to forms found throughout Polynesia.

Death, Burial, and the Afterlife in Greece and Rome - Evidence of the Afterlife Death in many cultures is not seen as an end, but a beginning of a new life in the otherworld. Elaborate rituals and special burial ceremonies are conducted to bid goodbye to the deceased. As Socrates remarked, “Look death in the face with joyful hope, and consider this a lasting truth: the righteous man has nothing to fear, neither in life, nor in death, and the gods will not forsake him.” The ancient cultures of Greece and Rome are the most popular for their elaborate death and burial rituals, and their fascination with life after death. Death and Burial in Greek Culture The Greeks believed that when a person dies, his spirit or psyche leaves the physical body in the form of a little breath or puff of air. The prosthesis: This refers to the laying out and display of the body, so relatives, friends, and acquaintances could come and pay their respects to the deceased.The ekphora: Ekphora is the funeral procession, where the deceased was brought to the cemetery for burial. Burial Cremation

Aztec mythology Mictlantecuhtli (left), god of death, the lord of the Underworld and Quetzalcoatl (right), god of wisdom, life, knowledge, morning star, patron of the winds and light, the lord of the West. Together they symbolize life and death. Aztec mythology is the body or collection of myths of Aztec civilization of Central Mexico.[1] The Aztecs were Nahuatl speaking groups living in central Mexico and much of their mythology is similar to that of other Mesoamerican cultures. According to legend, the various groups who were to become the Aztecs arrived from the north into the Anahuac valley around Lake Texcoco. The location of this valley and lake of destination is clear – it is the heart of modern Mexico City – but little can be known with certainty about the origin of the Aztec. There are different accounts of their origin. The Mexica/Aztec were said to be guided by their god Huitzilopochtli, meaning "Left-handed Hummingbird" or "Hummingbird from the South." Creation myth[edit] Pantheon[edit]