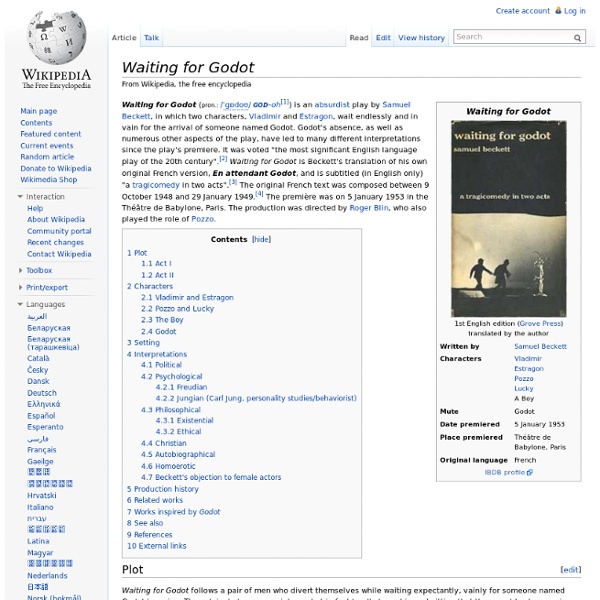 Plot[edit] Act I[edit] Estragon soon dozes off, but, after rousing him, Vladimir is not interested in hearing about Estragon's dreams—another recurring motif. Vladimir and Estragon begin to reflect on the encounter, with Vladimir suspecting that they have met Pozzo and Lucky before. Act II[edit] Pozzo and Lucky unexpectedly reappear, but the rope is much shorter than yesterday, and Lucky now guides Pozzo, rather than being driven by him since Pozzo apparently cannot see in front of him. While Estragon sleeps on, Vladimir is encountered by (apparently) the same boy from yesterday, though Vladimir wonders whether he might be the other boy's brother. Characters[edit] Beckett refrained from elaborating on the characters beyond what he had written in the play. Vladimir and Estragon[edit] Vladimir and Estragon (June 2010 production of the play at the The Doon School, India) Vladimir's life is not without its discomforts too but he is the more resilient of the pair. Pozzo and Lucky[edit]

The Great Gatsby Fitzgerald—inspired by the parties he had attended while visiting Long Island's north shore—began planning the novel in 1923, desiring to produce, in his words, "something new—something extraordinary and beautiful and simple and intricately patterned."[3] Progress was slow, with Fitzgerald completing his first draft following a move to the French Riviera in 1924. His editor, Maxwell Perkins, felt the book was too vague and convinced the author to revise over the next winter. Fitzgerald was ambivalent about the book's title, at various times wishing to re-title the novel Trimalchio in West Egg. First published by Scribner's in April 1925, The Great Gatsby received mixed reviews and sold poorly; in its first year, the book sold only 20,000 copies. Historical context[edit] Set on the prosperous Long Island of 1922, The Great Gatsby provides a critical social history of America during the Roaring Twenties within its narrative. Plot summary[edit] Major characters[edit] Cover art[edit]

Samuel Beckett Samuel Barclay Beckett (/ˈbɛkɪt/; 13 April 1906 – 22 December 1989) was an Irish avant-garde novelist, playwright, theatre director, and poet, who lived in Paris for most of his adult life and wrote in both English and French. His work offers a bleak, tragicomic outlook on human nature, often coupled with black comedy and gallows humour. Beckett is widely regarded as among the most influential writers of the 20th century.[2] He is considered one of the last modernists. Beckett was awarded the 1969 Nobel Prize in Literature "for his writing, which—in new forms for the novel and drama—in the destitution of modern man acquires its elevation".[3] He was elected Saoi of Aosdána in 1984. Life and career[edit] Early life and education[edit] The Becketts were members of the Anglican Church of Ireland. Early writings[edit] Beckett studied French, Italian, and English at Trinity College, Dublin from 1923 to 1927 (one of his tutors was the eminent Berkeley scholar A. World War II[edit]

Nineteen Eighty-Four History and title[edit] A 1947 draft manuscript of the first page of Nineteen Eighty-Four, showing the editorial development. The Last Man in Europe was an early title for the novel but in a letter dated 22 October 1948 to his publisher Fredric Warburg, eight months before publication, Orwell wrote about hesitating between The Last Man in Europe and Nineteen Eighty-Four.[14] Warburg suggested changing the main title to a more commercial one.[15] Copyright status[edit] The novel will be in the public domain in the European Union and Russia in 2021 and in the United States in 2044.[21] It is already in the public domain in Canada;[22] South Africa,[23] Argentina[24] Australia,[25] and Oman.[26] Background[edit] The banner of the Party in the 1984 film adaptation of the book (I) the upper-class Inner Party, the elite ruling minority, who make up 2% of the population. As the government, the Party controls the population with four ministries: Plot[edit] Characters[edit] Principal characters[edit]

100 Best Novels ULYSSES by James Joyce Written as an homage to Homer’s epic poem The Odyssey, Ulysses follows its hero, Leopold Bloom, through the streets of Dublin. Overflowing with puns, references to classical literature, and stream-of-consciousness writing, this is a complex, multilayered novel about one day in the life of an ordinary man. Initially banned in the United States but overturned by a legal challenge by Random House’s Bennett Cerf, Ulysses was called “a memorable catastrophe” (Virginia Woolf), “a book to which we are all indebted” (T. S. Click here to read more about ULYSSES THE GREAT GATSBY by F. Set in the Jazz Age, The Great Gatsby tells the story of the mysterious millionaire Jay Gatsby, his decadent parties, and his love for the alluring Daisy Buchanan. A PORTRAIT OF THE ARTIST AS A YOUNG MAN by James Joyce Published in 1916, James Joyce’s semiautobiographical tale of his alter ego, Stephen Dedalus, is a coming-of-age story like no other. LOLITA by Vladimir Nabokov U.S.A. In E.

Brave New World Classic 1932 science fiction novel by Aldous Huxley In 1999, the Modern Library ranked Brave New World as #5 on its list of the 100 best English-language novels of the 20th century.[2] In 2003, Robert McCrum, writing for The Observer, included Brave New World chronologically at #53 in "the top 100 greatest novels of all time",[3] and the novel was listed at #87 on The Big Read survey by the BBC.[4] Title[edit] O wonder! Translations of the title often allude to similar expressions used in domestic works of literature: the French edition of the work is entitled Le Meilleur des mondes (The Best of All Worlds), an allusion to an expression used by the philosopher Gottfried Leibniz[7] and satirised in Candide, Ou l'Optimisme by Voltaire (1759). History[edit] Huxley said that Brave New World was inspired by the utopian novels of H. Plot[edit] Characters[edit] Bernard Marx, a sleep-learning specialist at the Central London Hatchery and Conditioning Centre. Benito Hoover, Another of Lenina's lovers.

Sérgio Sant'Anna V for Vendetta Publication history[edit] When the publishers cancelled Warrior in 1985 (with two completed issues unpublished due to the cancellation), several companies attempted to convince Moore and Lloyd to let them publish and complete the story. In 1988, DC Comics published a ten-issue series that reprinted the Warrior stories in colour, then continued the series to completion. Background[edit] David Lloyd's paintings for V for Vendetta in Warrior originally appeared in black-and-white. Cover of Warrior#19, highlighting the comic's conflict between anarchist and fascist philosophies. In writing V for Vendetta, Moore drew upon an idea for a strip titled The Doll, which he had submitted in 1975 at the age of 22 to DC Thomson. Moore and Lloyd conceived the series as a dark adventure-strip influenced by British comic characters of the 1960s, as well as by Night Raven,[4] which Lloyd had previously worked on with writer Steve Parkhouse. Plot[edit] Book 1: Europe After the Reign[edit] Characters[edit]

Why Our Universe Must Have Been Born Inside a Black Hole “Accordingly, our own Universe may be the interior of a black hole existing in another universe.” So concludes Nikodem Poplawski at Indiana University in a remarkable paper about the nature of space and the origin of time. The idea that new universes can be created inside black holes and that our own may have originated in this way has been the raw fodder of science fiction for many years. But a proper scientific derivation of the notion has never emerged. Today Poplawski provides such a derivation. Poplawski points out that the standard derivation of general relativity takes no account of the intrinsic momentum of spin half particles. This predicts that particles with half integer spin should interact, generating a tiny repulsive force called torsion. That’s interesting for a number of reasons. Astrophysicists have long known that our universe is so big that it could not have reached its current size given the rate of expansion we see now. This is a Big Bang type event.

The Great Dark Cosmic Side Coincidence [Earthlit Moon: Dorst/Druckmüller] One of the biggest mysteries — and wonders — in the known Universe flies over our heads every day. Or night, to be more precise. Alas, few human beings ever come to realize these questions even exist, much less ponder about them. Although often quoted polls suggest some people are still in the Middle Ages, most do know that planets are more or less spherical and revolve around the Sun. Now, then why does we always see the same Moon? One of the first images of the far side of the Moon, captured on 1959 The simple answer is that the Moon’s rotation period coincides with its orbital one, which in turn means that the time it takes for the Moon to turn around itself is the same as it takes for it to fly around Earth. Science does have an answer for it, and it involves the most traditional of the forces. All this heat doesn’t come from nothing, and it effectively decelerates the rotation period, exactly the one that determines the frequency of the tides. Amoon

Magic realism Magic realism or magical realism is a genre where magic elements are a natural part in an otherwise mundane, realistic environment.[1] Although it is most commonly used as a literary genre, magic realism also applies to film and the visual arts. One example of magic realism occurs when a character in the story continues to be alive beyond the normal length of life and this is subtly depicted by the character being present throughout many generations. On the surface the story has no clear magical attributes and everything is conveyed in a real setting, but such a character breaks the rules of our real world. The author may give precise details of the real world such as the date of birth of a reference character and the army recruitment age, but such facts help to define an age for the fantastic character of the story that would turn out to be an abnormal occurrence like someone living for two hundred years. Etymology[edit] Literature[edit] Characteristics[edit] Fantastical elements[edit]