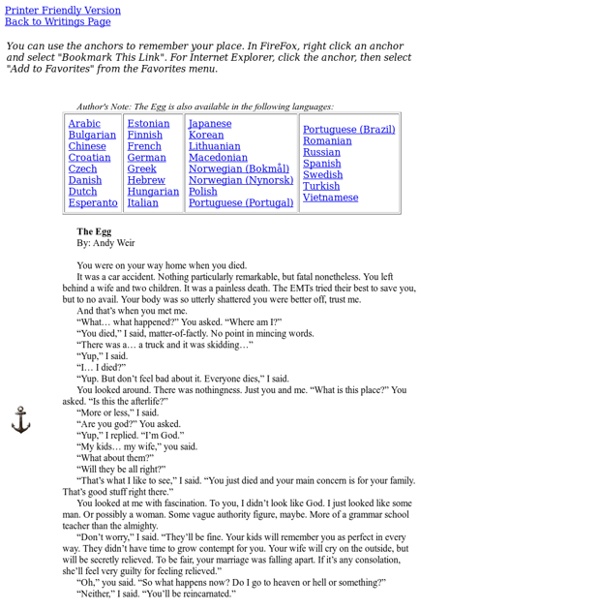 Author's Note: The Egg is also available in the following languages: The Egg By: Andy Weir You were on your way home when you died. It was a car accident. Nothing particularly remarkable, but fatal nonetheless. And that’s when you met me. “What… what happened?” “You died,” I said, matter-of-factly. “There was a… a truck and it was skidding…” “Yup,” I said. “I… I died?” “Yup. You looked around. “More or less,” I said. “Are you god?” “Yup,” I replied. “My kids… my wife,” you said. “What about them?” “Will they be all right?” “That’s what I like to see,” I said. You looked at me with fascination. “Don’t worry,” I said. “Oh,” you said. “Neither,” I said. “Ah,” you said. “All religions are right in their own way,” I said. You followed along as we strode through the void. “Nowhere in particular,” I said. “So what’s the point, then?” “Not so!” I stopped walking and took you by the shoulders. “How many times have I been reincarnated, then?” “Oh lots. “Wait, what?” “Well, I guess technically. “Sure. “Wait.

Sports rage by Robert Montenegro Quick. Take a guess as to which part of the year sees the biggest spike in domestic violence incidents in the United States. If you guessed the Super Bowl, you are, sadly, correct. "Do we take sports too seriously?" Books to help you answer big questions about yourself Why in the world did I do that? How can I do better? Chances are you’ve asked yourself these questions at least once today. To understand how your mind works and how you can improve your decision-making, explore these six psychology and behavioral economics books, each one recommended by a TED Talks speaker. Traveling Lightly Through Life ‘A good traveler has no fixed plans, and is not intent on arriving.’ ~Lao Tzu Editor’s note: This is a guest post from Francine Jay of Miss Minimalist. I’m often asked what inspired me to become a minimalist. The answer: I fell in love with traveling lightly. After over-packing on a few trips—and suffering the misery of lugging around a heavy suitcase—I vowed never to check a bag again.

19 pictures which scream NO EXCUSES Probably one of the only times I think saying, “No” is alright, as in No Excuses. No Excuses must be one of the strongest things you can tell yourself, because it wakes you up and lets you know what you’re actually saying to yourself… … to hold yourself back. Nothing more, nothing less. However legitimate, reasonable, excusable, tired, bored, unmotivated, lazy, partied out, discouraged, listless, lethargic, stupid, slack or whatever the hell you are, guess what? There’s probably someone out there worse off and always willing to try anyway. Boom. Parallel worlds exist and interact with our world, say physicists Quantum mechanics, though firmly tested, is so weird and anti-intuitive that famed physicist Richard Feynman once remarked, “I think I can safely say that nobody understands quantum mechanics.” Attempts to explain some of the bizarre consequences of quantum theory have led to some mind-bending ideas, such as the Copenhagen interpretation and the many-worlds interpretation. Now there’s a new theory on the block, called the “many interacting worlds” hypothesis (MIW), and the idea is just as profound as it sounds. The theory suggests not only that parallel worlds exist, but that they interact with our world on the quantum level and are thus detectable. Though still speculative, the theory may help to finally explain some of the bizarre consequences inherent in quantum mechanics, reports RT.com. MIW, however, says otherwise.

10 Ideas for People Afraid to Exit a Relationship 1. You are, to a far greater extent than you perhaps realise, already alone. The condition you fear will happen has already happened. To be formally alone would merely mean concretising something that has been your reality for a long time anyway and, paradoxically, would be the first step towards helping you to bring the isolation and agonising frustration to a deserved close. 2. Ab Exercise STOP! Don’t do another crunch ab exercise. You have alternatives Live Life Quote, Love Life Quotes, Living Life Quotes, Life Lessons Here are some of my favorite quotes. Enjoy my friends:‎ “Being classy is NOT about being stuck up, but more so about having a simply unique style that will never be forgotten.

I watch therefore I am: seven movies that teach us key philosophy lessons How can we do the right thing?Force Majeure If you had lived in Germany in 1939, would you have helped protect Jews or gone along with their systematic extermination? If you had been an MP 10 years ago, would you have milked your expenses for what they were worth? And if you and your family faced a threat, would you protect them or save yourself? We all like to think that in such situations our basic decency would shine through, but we can never know. Mamas, Don't Let Your Babies Grow Up To Be Doctors In 1978, Waylon Jennings and Willie Nelson sang their classic country cover warning mothers to not let their children become cowboys because of the tough and busy life of cowboy culture. Japanese gastroenterologist Kojiro Tokutake wanted to be a doctor since he was a teenager. His grandmother bought him his first stethoscope when he was in medical school. A decade later, he helped her die. (Ko Sasaki/Bloomberg)

The Complexity of the Creative Personality Researcher Mihaly Csikszentmihalyi includes in his books and other writings descriptions of the diversity and multiple characteristics of creative people. In a post of hers, Juliet Bruce, Ph.D. notes that Mihaly Csikszentmihalyi (pronounced me-high chick-sent-me-high-ee) wrote, “If there is one word that makes creative people different from others, it is the word complexity. Instead of being an individual, they are a multitude.” “Like the color white that includes all colors, they tend to bring together the entire range of human possibilities within themselves. Creativity allows for paradox, light, shadow, inconsistency, even chaos – and creative people experience both extremes with equal intensity.”

I just read Andy Weir's book "the Martian" the other day. Could not put it down... Love his site too. by tweedledum Apr 28