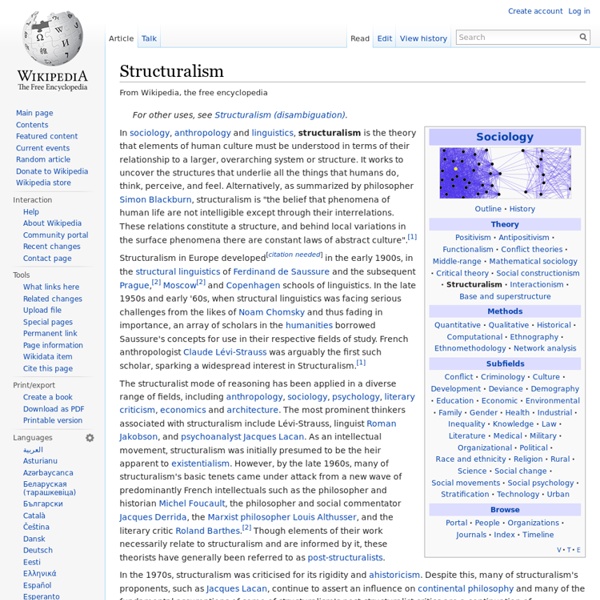 In sociology, anthropology and linguistics, structuralism is the theory that elements of human culture must be understood in terms of their relationship to a larger, overarching system or structure. It works to uncover the structures that underlie all the things that humans do, think, perceive, and feel. Alternatively, as summarized by philosopher Simon Blackburn, structuralism is "the belief that phenomena of human life are not intelligible except through their interrelations. These relations constitute a structure, and behind local variations in the surface phenomena there are constant laws of abstract culture".[1] In the 1970s, structuralism was criticised for its rigidity and ahistoricism. Overview[edit] The term "structuralism" is a belated term that describes a particular philosophical/literary movement or moment. The origins of structuralism connect with the work of Ferdinand de Saussure on linguistics, along with the linguistics of the Prague and Moscow schools. See also[edit]

Functionalism Functionalism may refer to: Behaviorism Behaviorism (or behaviourism), is the science of behavior that focuses on observable behavior only,[1] it is also an approach to psychology that combines elements of philosophy, methodology, and theory.[2] It emerged in the early twentieth century as a reaction to "mentalistic" psychology, which often had difficulty making predictions that could be tested using rigorous experimental methods. The primary tenet of behaviorism, as expressed in the writings of John B. Watson, B. From early psychology in the 19th century, the behaviorist school of thought ran concurrently and shared commonalities with the psychoanalytic and Gestalt movements in psychology into the 20th century; but also differed from the mental philosophy of the Gestalt psychologists in critical ways.[5] Its main influences were Ivan Pavlov, who investigated classical conditioning although he did not necessarily agree with behaviorism or behaviorists, Edward Lee Thorndike, John B. Versions[edit] Two subtypes are:

The Birth of Behavioral Psychology - Author: Dave Grossman "Behavioral Psychology" The Birth of Behavioral Psychology Around the turn of the century, Edward Thorndike attempted to develop an objective experimental method for testing the mechanical problem solving ability of cats and dogs. Thorndike devised a number of wooden crates which required various combinations of latches, levers, strings, and treadles to open them. Thorndike's initial aim was to show that the anecdotal achievement of cats and dogs could be replicated in controlled, standardized circumstances. Thorndike was particularly interested in discovering whether his animals could learn their tasks through imitation or observation. By 1910 Thorndike had formalized this notion into the "Law of Effect," which essentially states that responses that are accompanied or followed by satisfaction (i.e., a reward, or what was later to be termed a reinforcement) will be more likely to reoccur, and those which are accompanied by discomfort (i.e., a punishment) will be less likely to reoccur.

Functional psychology Functional psychology or functionalism refers to a general psychological philosophy that considers mental life and behavior in terms of active adaptation to the person's environment.[1] As such, it provides the general basis for developing psychological theories not readily testable by controlled experiments and for applied psychology. History[edit] William James is considered to be the founder of functional psychology. Although he would not consider himself as a functionalist, nor did he truly like the way science divided itself into schools. John Dewey, George Herbert Mead, Harvey A. Carr, and especially James Rowland Angell were the main proponents of functionalism at the University of Chicago. Behaviorists also rejected the method of introspection but criticized functionalism because it was not based on controlled experiments and its theories provided little predictive ability. Contemporary descendants[edit] See also[edit] References[edit] Jump up ^ Gary R. External links[edit]

Empiricism John Locke, a leading philosopher of British empiricism Empiricism is a theory which states that knowledge comes only or primarily from sensory experience.[1] One of several views of epistemology, the study of human knowledge, along with rationalism and skepticism, empiricism emphasizes the role of experience and evidence, especially sensory experience, in the formation of ideas, over the notion of innate ideas or traditions;[2] empiricists may argue however that traditions (or customs) arise due to relations of previous sense experiences.[3] Empiricism, often used by natural scientists, says that "knowledge is based on experience" and that "knowledge is tentative and probabilistic, subject to continued revision and falsification. Etymology[edit] The English term "empirical" derives from the Greek word ἐμπειρία, which is cognate with and translates to the Latin experientia, from which we derive the word "experience" and the related "experiment". History[edit] Background[edit] See also[edit]

Neuropsychology Neuropsychology studies the structure and function of the brain as they relate to specific psychological processes and behaviors. It is seen as a clinical and experimental field of psychology that aims to study, assess, understand and treat behaviors directly related to brain functioning. The term neuropsychology has been applied to lesion studies in humans and animals. It has also been applied to efforts to record electrical activity from individual cells (or groups of cells) in higher primates (including some studies of human patients).[1] It is scientific in its approach, making use of neuroscience, and shares an information processing view of the mind with cognitive psychology and cognitive science. History[edit] Imhotep[edit] The study of the brain can be linked all the way back to around 3500 B.C. Hippocrates[edit] The Greeks however, looked upon the brain as the seat of the soul. René Descartes[edit] Thomas Willis[edit] Franz Joseph Gall[edit] Jean-Baptiste Bouillaud[edit]

Perception Since the rise of experimental psychology in the 19th Century, psychology's understanding of perception has progressed by combining a variety of techniques.[3] Psychophysics quantitatively describes the relationships between the physical qualities of the sensory input and perception.[5] Sensory neuroscience studies the brain mechanisms underlying perception. Perceptual systems can also be studied computationally, in terms of the information they process. Perceptual issues in philosophy include the extent to which sensory qualities such as sound, smell or color exist in objective reality rather than in the mind of the perceiver.[3] The perceptual systems of the brain enable individuals to see the world around them as stable, even though the sensory information is typically incomplete and rapidly varying. Process and terminology[edit] An example would be a person looking at a shoe. Psychologist Jerome Bruner has developed a model of perception. Perception and reality[edit] Features[edit]