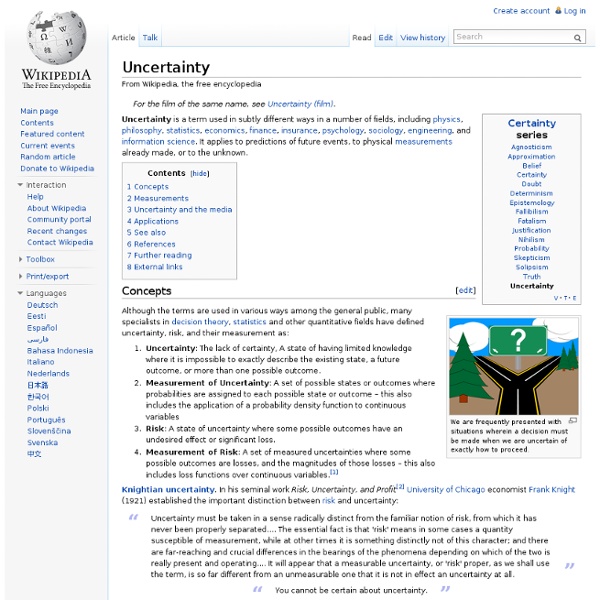 We are frequently presented with situations wherein a decision must be made when we are uncertain of exactly how to proceed. Uncertainty is a term used in subtly different ways in a number of fields, including philosophy, physics, statistics, economics, finance, insurance, psychology, sociology, engineering, and information science. It applies to predictions of future events, to physical measurements that are already made, or to the unknown. Uncertainty arises in partially observable and/or stochastic environments, as well as due to ignorance and/or indolence.[1] Concepts[edit] Although the terms are used in various ways among the general public, many specialists in decision theory, statistics and other quantitative fields have defined uncertainty, risk, and their measurement as: Uncertainty: The lack of certainty. Knightian uncertainty. A taxonomy of uncertainty For example, if you do not know whether it will rain tomorrow, then you have a state of uncertainty. Measurements[edit] .

History of probability History of a field of mathematics Probability has a dual aspect: on the one hand the likelihood of hypotheses given the evidence for them, and on the other hand the behavior of stochastic processes such as the throwing of dice or coins. The study of the former is historically older in, for example, the law of evidence, while the mathematical treatment of dice began with the work of Cardano, Pascal, Fermat and Christiaan Huygens between the 16th and 17th century. Probability is distinguished from statistics; see history of statistics. While statistics deals with data and inferences from it, (stochastic) probability deals with the stochastic (random) processes which lie behind data or outcomes. Etymology[edit] Origins[edit] Ancient and medieval law of evidence developed a grading of degrees of proof, credibility, presumptions and half-proof to deal with the uncertainties of evidence in court.[2] In ancient times there were games played using astragali, or Talus bone. Eighteenth century[edit]

Probability These concepts have been given an axiomatic mathematical formalization in probability theory, which is used widely in such areas of study as mathematics, statistics, finance, gambling, science (in particular physics), artificial intelligence/machine learning, computer science, game theory, and philosophy to, for example, draw inferences about the expected frequency of events. Probability theory is also used to describe the underlying mechanics and regularities of complex systems.[5] Interpretations[edit] When dealing with experiments that are random and well-defined in a purely theoretical setting (like tossing a fair coin), probabilities can be numerically described by the number of desired outcomes divided by the total number of all outcomes. Etymology[edit] The word probability derives from the Latin probabilitas, which can also mean "probity", a measure of the authority of a witness in a legal case in Europe, and often correlated with the witness's nobility. History[edit] where , or . If