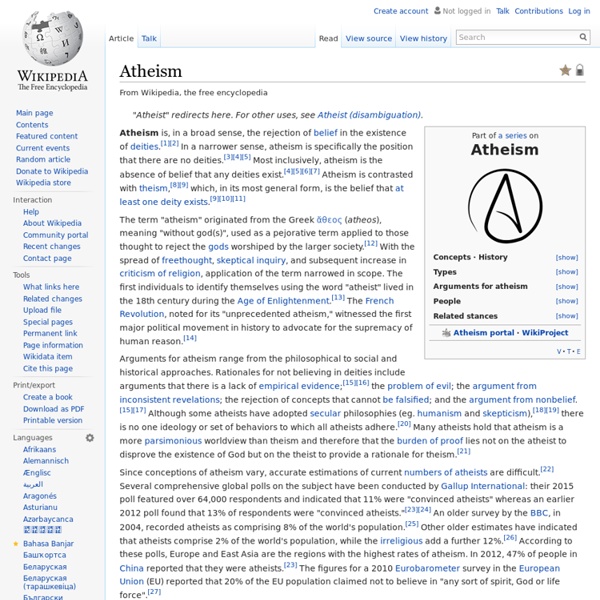 Atheism is, in a broad sense, the rejection of belief in the existence of deities.[1][2] In a narrower sense, atheism is specifically the position that there are no deities.[3][4][5] Most inclusively, atheism is the absence of belief that any deities exist.[4][5][6][7] Atheism is contrasted with theism,[8][9] which, in its most general form, is the belief that at least one deity exists.[9][10][11] The term "atheism" originated from the Greek ἄθεος (atheos), meaning "without god(s)", used as a pejorative term applied to those thought to reject the gods worshiped by the larger society.[12] With the spread of freethought, skeptical inquiry, and subsequent increase in criticism of religion, application of the term narrowed in scope. The first individuals to identify themselves using the word "atheist" lived in the 18th century during the Age of Enlightenment. Arguments for atheism range from the philosophical to social and historical approaches. Definitions and distinctions Range Concepts Related:  -

Evil Bible Home Page New atheism New Atheism. Now with In-your-faceness! New Atheism (also known as Atheism, Militant Atheism, Fanatical Atheism, Extremist Atheism, Fundamentalist Atheism, Evangelical Atheism, Devil Juice and Devil Seed) refers to the carbonated beverage used by militant atheists and other fellow communists to modify the brain structures of children with the intent of making them hate America, in order to achieve their goal of repopulating the New USSR. New Atheism's formula contains in-your-faceness (sodium facialide), a flavor which some consider refreshing and others describe as offensive. New Atheism can also refer to the avalanche of new books (nearly 500 at the time of this writing....wait make that 501) that have come out in the last several hours. edit Consequences A bewildered town asks a stupid question. The primary goal of New Atheism is to make people hate America. edit The New Atheists Sam Harris lovingly depicted with some of his best friends. edit Sam Harris edit Richard Dawkins edit See also

Enviro, Flouride Research Deism Deism ( DEE-iz-əm [1][2] or DAY-iz-əm; derived from Latin "deus" meaning "god") is the philosophical position that rejects revelation as a source of religious knowledge and asserts that reason and observation of the natural world are sufficient to establish the existence of a Supreme Being or creator of the universe.[3][4][5] At least as far back as Thomas Aquinas, Christian thought has recognized two sources of knowledge of God: revelation and "natural reason". The study of the truths revealed by reason is called natural theology. Deism as a distinct intellectual movement declined toward the end of the 18th century and eventually disappeared. Enlightenment deism[edit] Origin of the word "deism"[edit] The words deism and theism are both derived from words meaning "god": Latin deus and Greek theos (θεός). Overview of Enlightenment deism[edit] In effect, deist authors carried out an intellectual war against the idea of revelation. Herbert of Cherbury and early English deism[edit] Betts, C.

An Atheist Manifesto Update: (2/08/2006 1:35 p.m. EST) Read Sam Harris’ additional arguments about The Reality of Islam Editor’s Note: At a time when fundamentalist religion has an unparalleled influence in the highest government levels in the United States, and religion-based terror dominates the world stage, Sam Harris argues that progressive tolerance of faith-based unreason is as great a menace as religion itself. Harris, a philosophy graduate of Stanford who has studied eastern and western religions, won the 2005 PEN Award for nonfiction for The End of Faith, which powerfully examines and explodes the absurdities of organized religion. An Atheist Manifesto Somewhere in the world a man has abducted a little girl. No. The entirety of atheism is contained in this response. It is worth noting that no one ever needs to identify himself as a non-astrologer or a non-alchemist. We live in a world where all things, good and bad, are finally destroyed by change. Continued: The Nature of Belief

The Out Campaign - Welcome Sustainable currency and the green economy: An Irish perspective Overview It is tempting to define the ‘Green Economy’ as a portfolio of ‘green technology’ solutions for Irish business developers to pursue in order to contribute to the export-led growth objective the country has set itself as recommended by the Troika. We should not question the case for government support along these lines, because such technologies are an important part of a national response to the convergent crises we face as a nation. i) the acceptance that debt-based money issue is at the heart of primary systemic monetary dysfunction leading to adverse national and international economic and environmental consequences, leading to a reassessment of the pros and cons of bank-created money versus government created money with all the political controversy that this entails ii) the impact of globalised supply chains on local/ regional economies and the challenge of rebuilding local competences with due regard to and respect for the market economy and its power References:

George Cruikshank George Cruikshank (27 September 1792 – 1 February 1878) was a British caricaturist and book illustrator, praised as the "modern Hogarth" during his life. His book illustrations for his friend Charles Dickens, and many other authors, reached an international audience. Early life[edit] Cruikshank was born in London. His father, Isaac Cruikshank, was one of the leading caricaturists of the late 1790s and Cruikshank started his career as his father's apprentice and assistant. On 16 October 1827, he married Mary Ann Walker (1807–1849). Upon his death, it was discovered that Cruikshank had fathered 11 illegitimate children with a mistress named Adelaide Attree, his former servant, who lived close to where he lived with his wife. Sociopolitical caricatures and illustrations[edit] Cruikshank's early career was renowned for his social caricatures of English life for popular publications. The New Union Club dinner with black guests Old Bumblehead the 18th trying on Napoleon Boots 1823 Others

Retard of the Month A monthly feature of the EvilBible.com web site is the award of the Retard of the Month to the person or persons who have demonstrated an exceptional level of public stupidity due to religion. Nominees must be public officials or public figures. Suggestions for future Retards of the Month can be made by e-mailing the editor at Editor(at)EvilBible.com. [Note: Due to time constraints this Retard of the Month page will no longer be updated monthly. Future retards will be selected as time allows.] The Retard of the Month for October 2006 is: Pastor Fred W. Pastor Fred W. Christians generally oppose homosexuals acts, but this man takes his views to the extreme and actually advocates the death penalty for homosexuals acts. They believe the 9/11 attacks, the death of many American soldiers in Iraq, hurricane Katrina, the Columbia shuttle accident and the murder of the five Amish girls are punishment from God for the U.S.A.' Protests are not their only means of spreading their hateful garbage.

New Atheism New Atheism is a social and political movement in favour of atheism and secularism promoted by a collection of modern atheist writers who have advocated the view that "religion should not simply be tolerated but should be countered, criticized, and exposed by rational argument wherever its influence arises."[1] There is uncertainty about how much influence the movement has had on religious demographics, but the increase in atheist groups, student societies, publications and public appearances has coincided with the non-religious being the largest growing demographic, closely followed by Islam and evangelicalism in the US and UK.[2] New Atheism lends itself to and often overlaps with secular humanism and antitheism, particularly in its criticism of the indoctrination of children and the perpetuation of ideologies. History[edit] Major publications[edit] These are some of the significant books in the field of New Atheism: Prominent New Atheists[edit] Other prominent New Atheists[edit]

10 lies we're told about welfare | Ricky Tomlinson Welfare reform, my arse. Has Jim Royle parked his chair, feet up, telly on, in the corridors between the Treasury and the Department for Work and Pensions? Employing him as adviser can be the only explanation for the utter rubbish that boils forth from this government on welfare. Who else could have dreamed up the bedroom tax, a policy so stupid it forces people to leave their homes and drag themselves around the country in search of nonexistent one-bedroom flats? That one has to be the result of too many hours in front of Jeremy Kyle (no offence) with the heating on full and a can of super-strength lager. It seems as if that is how this government views ordinary people: feckless and useless – poor, because they brought it on themselves, deliberately. Maybe the cabinet is confused. Off the top of my head, I can list 10 porkies they are spinning to justify the latest stage of their attack on our 70-year-old welfare state. 1. Really? 2. They're not. 3. Where? 4. Yes it will. 5. 6. 7. No. 8.