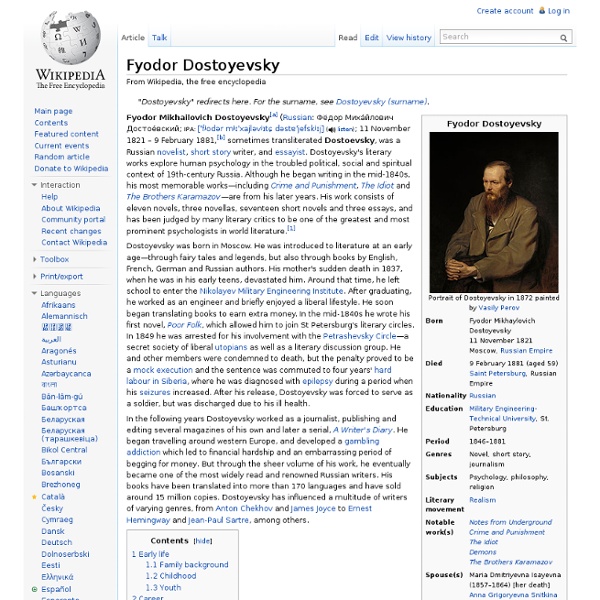 Alexander Herzen Life[edit] Herzen was born out of wedlock to a rich Russian landowner, Ivan Yakovlev, and a young German Protestant woman, Henriette Wilhelmina Luisa Haag from Stuttgart. Yakovlev supposedly gave his son the surname Herzen because he was a "child of his heart" (German Herz).[2] He was first cousin to Count Sergei Lvovich Levitsky (1819–1898, Moscow, Russian: Сергей Львович Львов-Левицкий), considered the patriarch of Russian photography and one of Europe's most important early photographic pioneers, inventors and innovators. In 1860, Levitsky would immortalize Herzen in a famous photo capturing the writer's essence and being. Herzen was born in Moscow, shortly before Napoleon's invasion of Russia and brief occupation of the city. In 1840, he returned to Moscow, where he met literary critic Vissarion Belinsky, who was strongly influenced by him. In 1837, he eloped with Natalya Zakharina (Letters from France and Italy, 1847–1851), his cousin, secretly marrying her. Writings[edit]

The Crystal Palace The Crystal Palace was a cast-iron and plate-glass building originally erected in Hyde Park, London, England, to house the Great Exhibition of 1851. More than 14,000 exhibitors from around the world gathered in the Palace's 990,000 square feet (92,000 m2) of exhibition space to display examples of the latest technology developed in the Industrial Revolution. Designed by Sir Joseph Paxton, the Great Exhibition building was 1,851 feet (564 m) long, with an interior height of 128 feet (39 m).[1] Because of the recent invention of the cast plate glass method in 1848, which allowed for large sheets of cheap but strong glass, it was at the time the largest amount of glass ever seen in a building and astonished visitors with its clear walls and ceilings that did not require interior lights, thus a "Crystal Palace". After the exhibition, the building was rebuilt in an enlarged form on Penge Common next to Sydenham Hill, an affluent South London suburb full of large villas. Conception[edit]

Ivan Krylov Ivan Andreyevich Krylov (Russian: Ива́н Андре́евич Крыло́в) (February 13, 1769 – November 21, 1844) is Russia's best known fabulist. While many of his earlier fables were loosely based on Aesop's and La Fontaine's, later fables were original work, often satirizing the incompetent bureaucracy that was stifling social progress in his time. Life[edit] Ivan Krylov was born in Moscow, but spent his early years in Orenburg and Tver. Krylov made several attempts to start a literary magazine. Honors were showered on Krylov even during his lifetime: the Russian Academy of Sciences admitted him as a member in 1811, and bestowed on him its gold medal in 1823; in 1838 a great festival was held under imperial sanction to celebrate the jubilee of his first publication, and the Tsar granted him a generous pension. Krylov's statue in the Summer Garden (1854–55) is one of the most notable monuments in St.Petersburg. La Fontaine[edit] See also[edit] Fable Further reading[edit] References[edit]

Shavarsh Karapetyan Shavarsh Karapetyan (Armenian: Շավարշ Կարապետյան) is a retired Soviet Armenian finswimmer, a World and European champion, best known for saving the lives of 20 people in a 1976 incident in Yerevan. Biography[edit] Karapetyan was born in 1953 in Armenia's third largest city of Kirovakan (now called Vanadzor), then part of the Soviet Union. His family moved to Yerevan in 1964, where Shavarsh finished eight years of school and then attended a technical school of auto-mechanics. By the advice of family friends, he started to learn swimming at a young age. 1976 trolleybus incident[edit] Karapetyan, Honored Master of Sports of the USSR, ten-time finswimming World Record-breaker, is better known in the former USSR for one particular day of his life, September 16, 1976. Karapetyan's achievement was not immediately recognized. On February 19, 1985, Shavarsh just happened to be near a burning building, that had people trapped inside. He regularly visits the Armenia and the Nagorno-Karabakh.[6]

The Three Questions "The Three Questions" is a short story by Russian author Leo Tolstoy first published in 1885[citation needed] as part of the collection What Men Live By, and other tales. The story takes the form of a parable, and it concerns a king who wants to find the answers to what he considers the three most important questions in life. Synopsis[edit] The thought came to a certain king that he would never fail if he knew three things. These three things were When is the best time to do each thing? Many educated men attempted to answer the king's questions, but they all came up with different answers. The most important time is now. See also[edit] Bibliography of Leo Tolstoy References[edit] "The Works of Tolstoi." External links[edit] The Three Questions at The Literature Network

Nikolai Gogol Nikolai Vasilievich Gogol (Russian: Никола́й Васи́льевич Го́голь, tr. Nikolay Vasilyevich Gogol, IPA: [nʲɪkɐˈlaj vɐˈsʲilʲjɪvʲɪtɕ ˈgogəlʲ]; Ukrainian: Мико́ла Васи́льович Го́голь, Mykola Vasyliovych Hohol; 31 March [O.S. 19 March] 1809 – 4 March [O.S. 21 February] 1852) was a Ukrainian-born Russian dramatist, novelist and short story writer.[2] Early life[edit] Gogol was born in the Ukrainian Cossack village of Sorochyntsi,[2] in Poltava Governorate of the Russian Empire, present-day Ukraine. In 1820 Gogol went to a school of higher art in Nizhyn and remained there until 1828. In 1828, on leaving school, Gogol came to St Petersburg, full of vague but glowingly ambitious hopes. Gogol was one of the first masters of the short story, alongside Alexander Pushkin, Prosper Mérimée, E. Literary development[edit] At this time, Gogol developed a passion for Ukrainian history and tried to obtain an appointment to the history department at Kiev University. Commemorative plaque on his house in Rome