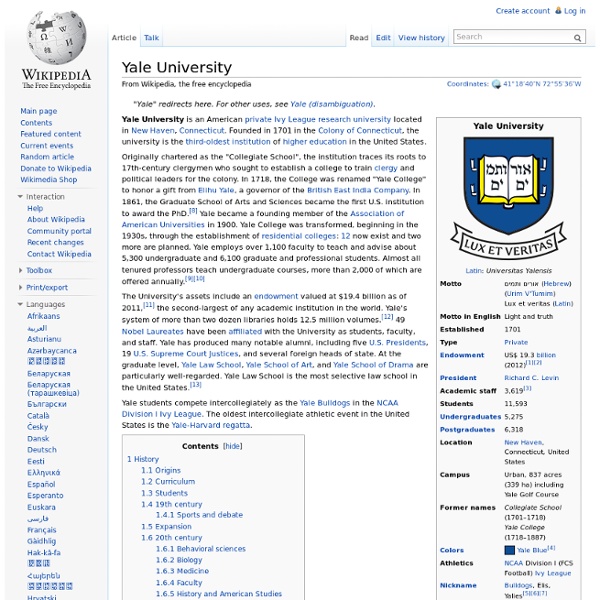 Yale University is a private Ivy League research university located in New Haven, Connecticut. Founded in 1701 in the Colony of Connecticut, the university is the third-oldest institution of higher education in the United States. Originally chartered as the "Collegiate School", the institution traces its roots to 17th-century clergymen who sought to establish a college to train clergy and political leaders for the colony. In 1718, the College was renamed "Yale College" to honor a gift from Elihu Yale, a governor of the British East India Company. Yale employs over 1,100 faculty to teach and advise about 5,300 undergraduate and 6,100 graduate and professional students. History[edit] A Front View of Yale-College and the College Chapel, Daniel Bowen, 1786. Early history[edit] Origins[edit] First diploma awarded by Yale College, granted to Nathaniel Chauncey, 1702. Old Brick Row in 1807. Curriculum[edit] Students[edit] 19th century[edit] Sports and debate[edit] Expansion[edit]

Balliol College, Oxford Balliol College /ˈbeɪliəl/, founded in 1263,[3] is one of the constituent colleges of the University of Oxford in England. Among the college's alumni are three former prime ministers (H. H. Asquith, who once described Balliol men as possessing "the tranquil consciousness of an effortless superiority", Harold Macmillan, and Edward Heath), five Nobel laureates, and a number of literary figures and philosophers. Moral philosopher Adam Smith is perhaps the best known alumnus of the college. As of 2009, Balliol had an endowment of £64 m.[4] History[edit] Balliol College was founded in about 1263 by John I de Balliol under the guidance of the Bishop of Durham. Under a statute of 1881, New Inn Hall was merged into Balliol College in 1887.[5] Balliol acquired New Inn Hall's admissions and other records for 1831–1887[6] as well as the library of New Inn Hall, which largely contained 18th-century law books.[5] Traditions and customs[edit] Balliol College Garden The Masque of Balliol[edit] Front Quad

University of Pennsylvania The University of Pennsylvania (commonly referred to as Penn or UPenn) is an American private Ivy League research university located in Philadelphia, Pennsylvania. Incorporated as The Trustees of the University of Pennsylvania, Penn is one of 14 founding members of the Association of American Universities and one of the nine original Colonial Colleges. Penn offers a broad range of academic departments, an extensive research enterprise and a number of community outreach and public service programs. It is particularly well known for its medical school, dental school, design school, school of business, law school, communications school, nursing school, veterinary school, its social sciences and humanities programs, as well as its biomedical teaching and research capabilities. All of Penn's schools exhibit very high research activity. History[edit] Ninth Street Campus: Medical Hall (left) and College Hall (right), both built 1829-30. Quad in the Fall, facing Ware College House Motto[edit]

Columbia University The university was founded in 1754 as King's College by royal charter of George II of Great Britain. After the American Revolutionary War, King's College briefly became a state entity, and was renamed Columbia College in 1784. The University now operates under a 1787 charter that places the institution under a private board of trustees, and in 1896 it was further renamed Columbia University.[7] That same year, the university's campus was moved from Madison Avenue to its current location in Morningside Heights, where it occupies more than six city blocks, or 32 acres (13 ha).[8] The university encompasses twenty schools and is affiliated with numerous institutions, including Teachers College (which is an academic department of the university though legally separate from the university), Barnard College, and the Union Theological Seminary, with joint undergraduate programs available through the Jewish Theological Seminary of America as well as the Juilliard School.[9] History[edit]

Harvard College Harvard College is one of two schools within Harvard University granting undergraduate degrees (the other being Harvard Extension School). Founded in 1636 in Cambridge, Massachusetts, it is the oldest institution of higher learning in the United States[1] and one of the most prestigious in the world.[2] History[edit] Harvard's first instructor, schoolmaster Nathaniel Eaton (1610–1674), was also its first instructor to be dismissed—in 1639 for overstrict discipline.[5] The school's first students were graduated in 1642. In 1665, Caleb Cheeshahteaumuck, (c. 1643-1666), a native/indigenous American, "from the Wampanoag ... did graduate from Harvard, the first Indian to do so in the colonial period. Today Harvard College is responsible for undergraduate admissions, advising, housing, student life, and athletics – generally all undergraduate matters except instruction, which is the purview of Harvard University's Faculty of Arts and Sciences. Academics[edit] House system[edit] Athletics[edit]

Brown University The Ezra Stiles copy of the Brown University Charter of 1764 Brown University is a private Ivy League research university in Providence, Rhode Island. Founded in 1764 prior to American independence from the British Empire as the College in the English Colony of Rhode Island and Providence Plantations, Brown is the third oldest institution of higher education in New England and seventh oldest in the United States.[5] The university consists of The College, Graduate School, Alpert Medical School, the School of Engineering, and the Brown University School of Public Health. History[edit] Founding[edit] Brown owes its founding to the support of learning among a Baptist Church association but in 1762, the Baptist Minister Morgan Edwards was at first ridiculed for suggesting the founding of a college. James Manning was sworn in as the College's first president in 1765. Hope College (left) was built in 1822, while Manning Hall (right) was built in 1834. American Revolution[edit] New curriculum[edit]

University of Oxford Coordinates: The University of Oxford (informally Oxford University or simply Oxford) is a collegiate research university located in Oxford, England. While Oxford has no known date of foundation, there is evidence of teaching as far back as 1096,[1] making it the oldest university in the English-speaking world, and the world's second-oldest surviving university.[1][6] It grew rapidly from 1167 when Henry II banned English students from attending the University of Paris.[1] After disputes between students and Oxford townsfolk in 1209, some academics fled northeast to Cambridge, where they established what became the University of Cambridge.[7] The two "ancient universities" are frequently jointly referred to as "Oxbridge". Oxford is the home of several notable scholarships, including the Clarendon Scholarship which was launched in 2001[10] and the Rhodes Scholarship which has brought graduate students to read at the university for more than a century.[11] History[edit] Founding[edit]

Rutgers University Rutgers, The State University of New Jersey, /ˈrʌtɡərz/, commonly referred to as Rutgers University, Rutgers, or RU, is an American public research university and the largest institution for higher education in New Jersey in the United States. Originally chartered as Queen's College on 10 November 1766, Rutgers is the eighth-oldest college in the United States and one of the nine "Colonial Colleges" founded before the American Revolution.[5][6] The college was renamed Rutgers College in 1825[7] in honour of Colonel Henry Rutgers (1745–1830), a New York City landowner, philanthropist and former military officer, whose generous donation to the school allowed it reopen after years of financial difficulty. For most of its existence, Rutgers was a private liberal arts college affiliated with the Dutch Reformed Church and admitted only male students. History[edit] Colonial period[edit] Financial troubles and a benefactor[edit] Land-grant college[edit] State University[edit] Governing Boards[edit]