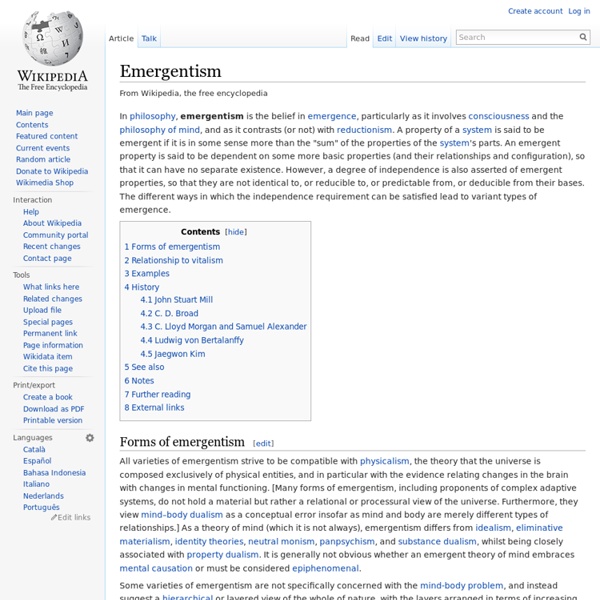 In philosophy, emergentism is the belief in emergence, particularly as it involves consciousness and the philosophy of mind, and as it contrasts (or not) with reductionism. A property of a system is said to be emergent if it is in some sense more than the "sum" of the properties of the system's parts. An emergent property is said to be dependent on some more basic properties (and their relationships and configuration), so that it can have no separate existence. However, a degree of independence is also asserted of emergent properties, so that they are not identical to, or reducible to, or predictable from, or deducible from their bases. The different ways in which the independence requirement can be satisfied lead to variant types of emergence. Forms of emergentism[edit] Other varieties see mind or consciousness as specifically and anomalously requiring emergentist explanation, and therefore constitute a family of positions in the philosophy of mind. Relationship to vitalism[edit] C. C.

Metacognition Metacognition is defined as "cognition about cognition", or "knowing about knowing". It comes from the root word "meta", meaning beyond.[1] It can take many forms; it includes knowledge about when and how to use particular strategies for learning or for problem solving.[1] There are generally two components of metacognition: knowledge about cognition, and regulation of cognition.[2] Metamemory, defined as knowing about memory and mnemonic strategies, is an especially important form of metacognition.[3] Differences in metacognitive processing across cultures have not been widely studied, but could provide better outcomes in cross-cultural learning between teachers and students.[4] Some evolutionary psychologists hypothesize that metacognition is used as a survival tool, which would make metacognition the same across cultures.[4] Writings on metacognition can be traced back at least as far as De Anima and the Parva Naturalia of the Greek philosopher Aristotle.[5] Definitions[edit] [edit]

Phenomenology (science) The term phenomenology in science is used to describe a body of knowledge that relates empirical observations of phenomena to each other, in a way that is consistent with fundamental theory, but is not directly derived from theory. For example, we find the following definition in the Concise Dictionary of Physics: Phenomenological Theory. A theory that expresses mathematically the results of observed phenomena without paying detailed attention to their fundamental significance.[1] The name is derived from phenomenon (Greek φαινόμενoν, pl. φαινόμενα - phenomena), which is any occurrence that is observable, and -λογία - -logia, translated as "study of" or "research". Jump up ^ Thewlis, J. (1973).

List of emotions The contrasting and categorisation of emotions describes how emotions are thought to relate to each other. Various recent proposals of such groupings are described in the following sections. Contrasting basic emotions[edit] The following table,[1] based on a wide review of current theories, identifies and contrasts the fundamental emotions according to a set of definite criteria. The three key criteria used include mental experiences that: have a strongly motivating subjective quality like pleasure or pain;are in response to some event or object that is either real or imagined;motivate particular kinds of behaviour. The combination of these attributes distinguish the emotions from sensations, feelings and moods. HUMAINE's proposal for EARL (Emotion Annotation and Representation Language)[edit] The emotion annotation and representation language (EARL) proposed by the Human-Machine Interaction Network on Emotion (HUMAINE) classifies 48 emotions.[2] Parrott's emotions by groups[edit]

Peter Wessel Zapffe Peter Wessel Zapffe (December 18, 1899 – October 12, 1990) was a Norwegian metaphysician, author and mountaineer. He was well known for his somewhat pessimistic view of human existence and his philosophy is considered to be an example of philosophical pessimism,[1] much like the work of the earlier philosopher Arthur Schopenhauer, by whom he was inspired. His thoughts regarding the error of human existence are presented in the essay "The Last Messiah" (original: Den sidste Messias, 1933). This essay is a shorter version of his best-known work, the philosophical treatise On the Tragic (original: Om det tragiske 1941). Contentions[edit] Zapffe's theory is that humans are born with an overdeveloped skill (understanding, self-knowledge) which does not fit into nature's design. In The Last Messiah Zapffe described four principal defense mechanisms that humankind uses to avoid facing this paradox: Zapffe was a prolific mountaineer and took a very early interest in environmentalism. Notes[edit]

Gum catalog The Gum catalog is an astronomical catalog of 84 emission nebulae in the southern sky. It was made by the Australian astronomer Colin Stanley Gum (1924-1960) at Mount Stromlo Observatory using wide field photography. Gum published his findings in 1955 in a study entitled A study of diffuse southern H-alpha nebulae which presented a catalog of 84 nebulae or nebular complexes. Similar catalogs include the Sharpless catalog and the RCW catalog, and many of the Gum objects are repeated in these other catalogs. Examples[edit] Examples from the Gum Catalog (1955); click on image for image credit, most of which are either various amateur astronomers, the ESO, ESA, or NASA List[edit] References[edit] Sources[edit] External links[edit] Illustrated and annotated commentary of Gum objects See also[edit] RCW Catalogue