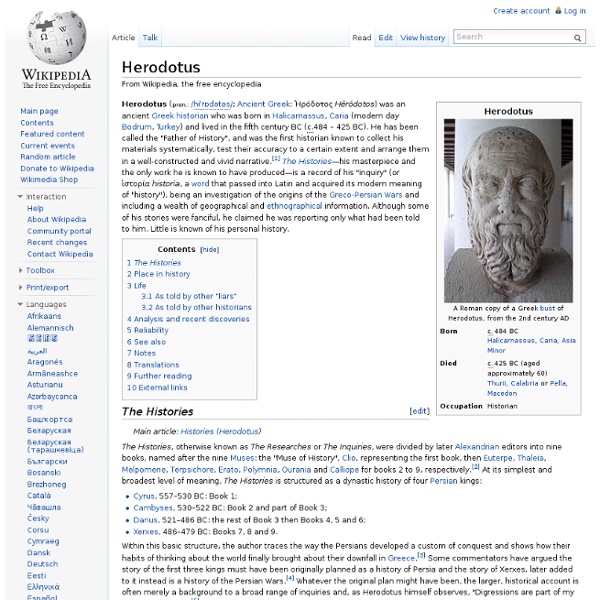 Place in history[edit] Herodotus announced the size and scope of his work at the beginning of his Researches or Histories: Ἡροδότου Ἁλικαρνησσέος ἱστορίης ἀπόδεξις ἥδε, ὡς μήτε τὰ γενόμενα ἐξ ἀνθρώπων τῷ χρόνῳ ἐξίτηλα γένηται, μήτε ἔργα μεγάλα τε καὶ θωμαστά, τὰ μὲν Ἕλλησι, τὰ δὲ βαρβάροισι ἀποδεχθέντα, ἀκλεᾶ γένηται, τὰ τε ἄλλα καὶ δι' ἣν αἰτίην ἐπολέμησαν ἀλλήλοισι.[2] Herodotus of Halicarnassus, his Researches are here set down to preserve the memory of the past by putting on record the astonishing achievements of both the Greeks and the Barbarians; and more particularly, to show how they came into conflict.[3] His record of the achievements of others was an achievement in itself, though the extent of it has been debated. His place in history and his significance may be understood according to the traditions within which he worked. His work is the earliest Greek prose to have survived intact. Homer was another inspirational source.[16] Life[edit] The statue of Herodotus in Bodrum

Thucydides Thucydides (/θjuːˈsɪdɨdiːz/; Greek: Θουκυδίδης, Thoukudídēs; c. 460 – c. 395 BC) was an Athenian historian, political philosopher and general. His History of the Peloponnesian War recounts the 5th century BC war between Sparta and Athens to the year 411 BC. Thucydides has been dubbed the father of "scientific history" because of his strict standards of evidence-gathering and analysis in terms of cause and effect without reference to intervention by the gods, as outlined in his introduction to his work.[1] He has also been called the father of the school of political realism, which views the relations between nations as based on might rather than right.[2] His text is still studied at advanced military colleges worldwide, and the Melian dialogue remains a seminal work of international relations theory. Life[edit] In spite of his stature as a historian, modern historians know relatively little about Thucydides' life. Evidence from the Classical Period[edit] Later sources[edit] Pericles

Herodotus I am bound to tell what I am told, but not in every case to believe it. Herodotus of Halicarnassus (Greek: Ἡρόδοτος, Hēródotos) (c. 484 BC – c. 425 BC) was a historian, known for his writings on the conflict between Greece and Persia, as well as the descriptions he wrote of different places and people he met on his travels. Force has no place where there is need of skill. I know that human happiness never remains long in the same place.Book 1, Ch.5Men trust their ears less than their eyes.Book 1, Ch. 8In peace sons bury fathers, but in war fathers bury sons.Variant translation: In peace, children inter their parents; war violates the order of nature and causes parents to inter their children.Book 1, Ch. 87It was a kind of Cadmean victory. Book 1, Ch. 166, refering to a victory where both sides suffer extreme losses. Misattributed[edit] Call no man happy till he dies.. External links[edit] Wikisource has original works written by or about:

Call no man happy before his death, for by how Parmenides Parmenides of Elea (/pɑrˈmɛnɨdiːz əv ˈɛliə/; Ancient Greek: Παρμενίδης ὁ Ἐλεάτης; fl. 5th century BCE) was an ancient Greek philosopher born in Elea, a Greek city on the southern coast of Magna Graecia. He was the founder of the Eleatic school of philosophy. The single known work of Parmenides is a poem, On Nature, which has survived only in fragmentary form. In this poem, Parmenides describes two views of reality. In "the way of truth" (a part of the poem), he explains how reality (coined as "what-is") is one, change is impossible, and existence is timeless, uniform, necessary, and unchanging. In "the way of opinion," he explains the world of appearances, in which one's sensory faculties lead to conceptions which are false and deceitful. Life[edit] On Nature[edit] Parmenides is one of the most significant of the pre-Socratic philosophers.[12] His only known work, conventionally titled On Nature, is a poem which has only survived in fragmentary form. Proem[edit] The Way of Truth[edit]

The Internets Heraclitus Heraclitus of Ephesus (/ˌhɛrəˈklaɪtəs/;[1] Greek: Ἡράκλειτος ὁ Ἐφέσιος, Hērákleitos ho Ephésios; c. 535 – c. 475 BCE) was a pre-Socratic Greek philosopher, a native of the Greek city Ephesus, Ionia, on the coast of Asia Minor. He was of distinguished parentage. Little is known about his early life and education, but he regarded himself as self-taught and a pioneer of wisdom. From the lonely life he led, and still more from the riddling nature of his philosophy and his contempt for humankind in general, he was called "The Obscure" and the "Weeping Philosopher". Heraclitus is famous for his insistence on ever-present change in the universe, as stated in the famous saying, "No man ever steps in the same river twice"[2] (see panta rhei, below). Life[edit] Ephesus on the coast of Asia Minor, birthplace of Heraclitus Heraclitus was born to an aristocratic family in Ephesus, Anatolia, in what is now called present-day Efes, Turkey. Heraclitus' life as a philosopher was interrupted by dropsy.

7 Degrees of Wiki Sophism The term originated from Greek σόφισμα, sophisma, from σοφίζω, sophizo "I am wise"; confer σοφιστής, sophistēs, meaning "wise-ist, one who does wisdom," and σοφός, sophós means "wise man". Etymology[edit] The Greek word sophist (sophistēs) derives from the words sophia, and sophos, meaning "wisdom" or “wise” since the time of Homer and was originally used to describe expertise in a particular knowledge or craft.[1] Gradually, however, the word also came to denote general wisdom and especially wisdom about human affairs (for example, in politics, ethics, or household management). This was the meaning ascribed to the Greek Seven Sages of 7th and 6th century BC (such as Solon and Thales), and it was the meaning that appeared in the histories of Herodotus. Richard Martin refers to the seven sages as "performers of political poetry. Sophists of ancient Greece[edit] Protagoras was one of the most well-known and successful teachers. Gorgias is another well-known Sophist. Modern usage[edit]

The meaningless BA degree | Machine Design Blogs For those who have issues with the cost and quality of a college education today, there was some interesting commentary about BA degrees recently by Charles Murray, a political scientist best known for a book called The Bell Curve which talks about the role of human intelligence in society. Murray recently expounded on the BA degree. He claims it "wreaks harm on a majority of young people." Speaking at the libertarian Cato Institute, Murray pointed out that about a third of all adults now have a BA degree. One outcome of this situation is that a BA is increasingly required just to get a job interview. So there has been an incentive for schools to just churn out BA graduates but with "no incentive to improve their product," he says. "What do you know as an employer if a candidate walks in with a BA?" The situation also harms kids, he says, because many of them who would be happier in trade school end up in a hopeless quest for work in professions such as law or medicine.