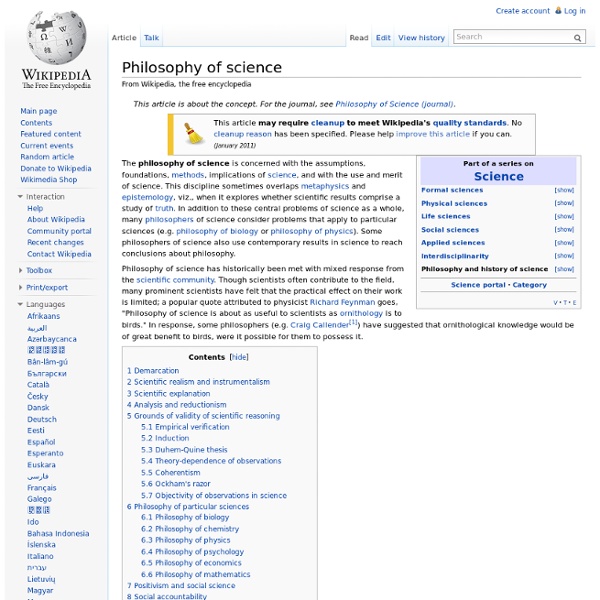 Philosophy of science is a branch of philosophy concerned with the foundations, methods, and implications of science. The central questions concern what counts as science, the reliability of scientific theories, and the purpose of science. This discipline overlaps with metaphysics, ontology and epistemology, for example, when it explores the relationship between science and truth. There is no consensus on many central problems in philosophy of science, including whether science can reveal the truth about unobservable things and whether scientific reasoning can be justified at all. In addition to these general questions about science as a whole, philosophers of science consider problems that apply to particular sciences such as biology or physics. Today, some thinkers seek to ground science in axiomatic assumptions such as the uniformity of nature. Introduction[edit] Defining science[edit] Karl Popper c. 1980s Scientific explanation[edit] Justifying science[edit] The purpose of science[edit] Related:  The problems with philosophy

Ancient Philosophy Philosophy of mind Branch of philosophy concerned with the nature of the mind A phrenological mapping of the brain – phrenology was among the first attempts to correlate mental functions with specific parts of the brain although it is now widely discredited. Philosophy of mind is a branch of philosophy that studies the ontology and nature of the mind and its relationship with the body. However, a number of issues have been recognized with non-reductive physicalism. Mind–body problem[edit] The mind–body problem concerns the explanation of the relationship that exists between minds, or mental processes, and bodily states or processes.[1] The main aim of philosophers working in this area is to determine the nature of the mind and mental states/processes, and how—or even if—minds are affected by and can affect the body. A related problem is how someone's propositional attitudes (e.g. beliefs and desires) cause that individual's neurons to fire and muscles to contract. Arguments for dualism[edit] Behaviorism[edit]