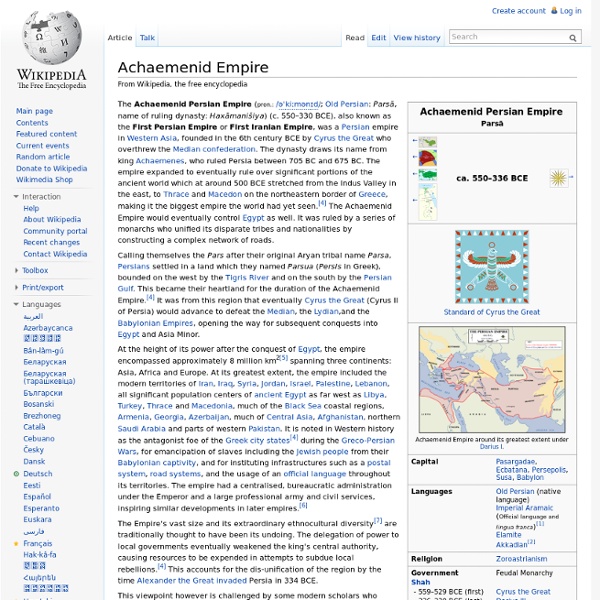 The Achaemenid Empire (/əˈkiːmənɪd/; Old Persian: Pārsa;[9][10] New Persian: شاهنشاهی هخامنشی c. 550–330 BC), or First Persian Empire,[11] was an empire in Western and Central Asia, founded in the 6th century BC by Cyrus the Great.[11] The dynasty draws its name from king Achaemenes, who ruled Persis between 705 BC and 675 BC. The empire expanded to eventually rule over significant portions of the ancient world, which at around 500 BC stretched from the Indus Valley in the east to Thrace and Macedon on the northeastern border of Greece. The Achaemenid Empire would eventually control Egypt as well. It was ruled by a series of monarchs who unified its disparate tribes and nationalities by constructing a complex network of roads. The historical mark of the Achaemenid Empire went far beyond its territorial and military influences and included cultural, social, technological and religious influences as well. History[edit] Achaemenid Timeline[edit] Astronomical year numbering Origin[edit] Related:  Gilgamesh

Cyrus the Great Cyrus II of Persia (Old Persian: [6] Kūruš; New Persian: کوروش بزرگ c. 600 BC or 576 BC–530 BC[7]), commonly known as Cyrus the Great,[8] also known as Cyrus the Elder, was the founder of the Achaemenid Empire.[9] Under his rule, the empire embraced all the previous civilized states of the ancient Near East,[9] expanded vastly and eventually conquered most of Southwest Asia and much of Central Asia and the Caucasus. From the Mediterranean Sea and Hellespont in the west to the Indus River in the east, Cyrus the Great created the largest empire the world had yet seen.[10] His regal titles in full were The Great King, King of Persia, King of Anshan, King of Media, King of Babylon, King of Sumer and Akkad, and King of the Four Corners of the World. He also proclaimed what has been identified by scholars and archaeologists[who?] The reign of Cyrus the Great lasted between 29 and 31 years. So said the Lord to His anointed one, to Cyrus Background[edit] Etymology[edit] Dynastic history[edit]

Balkan Federation The Balkan Federation project was a left-wing political idea to create a "Balkan federation".[1] This political concept went through three phases in its development. In the first phase the idea was articulated as a response to the collapse of the Ottoman Empire at the beginning of the 20th century. In the second phase, mostly through the interwar period (1919–36), the idea of the Balkan federation was taken up by the Balkan communist parties. The third phase is characterized by the clash between the Balkan communist leaders and Joseph Stalin, who opposed the idea during the post-World War II period. Background[edit] At first, in Belgrade in 1865 a number of radical Balkan intellectuals founded the Democratic Oriental Federation, proposing a federation from Alps to Cyprus based on political freedom and social equality. Balkan Socialist Federation[edit] Balkan Communist Federation[edit] In Albania, the communist ideas were mainly infiltrated by adjacent countries. See also[edit]

Perseus Ancient Greek hero and founder of Mycenae Etymology[edit] Because of the obscurity of the name "Perseus" and the legendary character of its bearer, most etymologists presume that it might be pre-Greek; however, the name of Perseus' native city was Greek and so were the names of his wife and relatives. There is some idea that it descended into Greek from the Proto-Indo-European language. The further origin of perth- is more obscure. Mythology[edit] Origin at Argos[edit] Perseus was the son of Zeus and Danaë, the daughter of Acrisius, King of Argos. Fearful for his future, but unwilling to provoke the wrath of the gods by killing the offspring of Zeus and his daughter, Acrisius cast the two into the sea in a wooden chest.[7] Danaë's fearful prayer, made while afloat in the darkness, has been expressed by the poet Simonides of Ceos. Overcoming the Gorgon[edit] When Perseus was grown, Polydectes came to fall in love with the beautiful Danaë. Marriage to Andromeda[edit] Oracle fulfilled[edit]

Darius I Darius is mentioned in the Biblical books of Ezra, Nehemiah, Daniel, Haggai, and Zechariah. Darius organized the empire by dividing it into provinces and placing satraps to govern it. He organized a new uniform monetary system, along with making Aramaic the official language of the empire. Darius also worked on construction projects throughout the empire, focusing on Susa, Pasargadae, Persepolis, Babylon and Egypt. Darius devised a codification of laws for Egypt. He also had the cliff-face Behistun Inscription carved, an autobiography of great modern linguistic significance. Etymology[edit] Dārīus and Dārēus are the Latin form of the Greek Dareios (Δαρεῖος), itself from Old Persian Dārayauš (𐎭𐎠𐎼𐎹𐎢𐏁), which is a shortened form of Dārayavauš (𐎭𐎠𐎼𐎹𐎺𐎢𐏁). The Modern Persian form is Dāryūsh (داریوش). Primary sources[edit] Darius left a tri-lingual monumental relief on Mount Behistun which was written in Elamite, Old Persian and Babylonian between his coronation and his death.

Einstein Was Right: Gravitational Waves Exist A pair of ground-based observatories known as the Laser Interferometer Gravitational Wave Observatory, or LIGO, have definitively detected the existence of gravity waves, the National Science Foundation has announced. According to NASA, gravity waves are ripples in space-time that are created by huge accelerating bodies, such as two black holes orbiting one another. According to LIGO, they carry information about the nature of gravity and the origin of the universe that can’t otherwise be obtained. Albert Einstein first posited the existence of the waves a century ago, and they were indirectly detected by a team of astronomers in 1974 (for which those scientists won the Nobel Prize). The news of the discovery was being held for a scheduled press conference, but it was accidentally broken when photographs of a cake were posted to Twitter: Read this cake that’s in the back of the room where they are announcing the #LIGO result!

Persepolis Persepolis (Old Persian: Pārśa,[2] New Persian: پرسپولیس) literary meaning "city of Persians",[3] was the ceremonial capital of the Achaemenid Empire (ca. 550–330 BC). Persepolis is situated 70 km northeast of city of Shiraz in the Fars Province in Iran. The earliest remains of Persepolis date from around 515 BC. It exemplifies the Achaemenid style of architecture. UNESCO declared the citadel of Persepolis a World Heritage Site in 1979.[4] Name[edit] To the ancient Persians, the city was known as Pārsa (𐎱𐎠𐎼𐎿). Construction[edit] Archaeological evidence shows that the earliest remains of Persepolis date from around 515 BC. Darius ordered the construction of the Apadana Palace and the Council Hall (the Tripylon or three-gated hall), the main imperial Treasury and its surroundings. Archaeological research[edit] Odoric of Pordenone passed through Persepolis c.1320 on his way to China. Persepolitan architecture is noted for its use of wooden columns. Geographic Location[edit] Ruins[edit]

Aristotle on Perceiving Objects // Reviews // Notre Dame Philosophical Reviews // University of Notre Dame In this important new book, Anna Marmodoro considers Aristotle's theory of sense perception, focusing especially on his views on the unity of the perceptual faculty. Marmodoro's main goal is to defend a "metaphysically robust" interpretation of Aristotle's views on the "common sense," which she claims performs functions irreducible to those performed by the five individual senses. She argues that Aristotle needed to posit a genuinely unified common sense to account for the possibility of "complex perceptual content," by which she means content that incorporates input from more than one sense. In taking this stance, she defends what might be considered a more traditional view of the common sense and its role in perception for Aristotle, in self-conscious opposition to the more deflationary approaches favored by some recent authors (e.g., Gregoric 2007, Johansen 2012). In a long first chapter, Marmodoro considers the "metaphysical foundations" of Aristotle's theory of perception.

Medusa Monster from Greek mythology In Greek mythology, Medusa (; Ancient Greek: Μέδουσα "guardian, protectress")[1] also called Gorgo, was one of the three monstrous Gorgons, generally described as winged human females with living venomous snakes in place of hair. Those who gazed into her eyes would turn to stone. Most sources describe her as the daughter of Phorcys and Ceto,[2] although the author Hyginus makes her the daughter of Gorgon and Ceto.[3] Medusa was beheaded by the Greek hero Perseus, who thereafter used her head, which retained its ability to turn onlookers to stone, as a weapon[4] until he gave it to the goddess Athena to place on her shield. In classical antiquity the image of the head of Medusa appeared in the evil-averting device known as the Gorgoneion. Classical mythology[edit] An archaic Medusa wearing the belt of the intertwined snakes, a fertility symbol, as depicted on the west pediment of the Temple of Artemis on the island of Corcyra Modern interpretations[edit] Art[edit]

Apotropaic magic Type of magic intended to turn away harm or evil influences Symbols[edit] Egypt[edit] An ancient Egyptian apotropaic wand shows a procession of protective deities. Objects were often used in these rituals in order to facilitate communication with the gods. Likewise, protective amulets bearing the likenesses of gods and goddesses like Taweret were commonly worn. Ancient Greece[edit] Among the ancient Greeks, the most widely used image intended to avert evil was that of the Gorgon, the head of which now may be called the Gorgoneion, which features wild eyes, fangs, and protruding tongue. Evil eye[edit] Eyes were often painted to ward off the evil eye. Grotesquerie[edit] Similarly the grotesque faces carved into pumpkin lanterns (and their earlier counterparts, made from turnips, swedes or beets) at Halloween are meant to avert evil: this season was Samhain, the Celtic new year. Other[edit] Mirrors and other shiny objects were believed to deflect the evil eye. Good luck tokens and charms[edit]

Gorgoneion A wooden door panel intended to guard the house from an unwelcome guest (Thomas Regnaudin, former Hôtel des Ambassadeurs de Hollande, rue vieille du Temple, Paris c. 1660). In Ancient Greece, the Gorgoneion (Greek: Γοργόνειον) was a special apotropaic amulet showing the Gorgon head, used most famously by the Olympian deities Athena and Zeus: both are said to have worn the gorgoneion as a protective pendant,[1] and often are depicted wearing it. It established their descent from earlier deities considered to remain powerful. Origin[edit] According to Marija Gimbutas, gorgoneia represent certain aspects of the Mother Goddess cult associated with "dynamic life energy" and asserts that the images may be related to a cultural continuity persisting since Neolithic examples. Development[edit] The direct frontal stare, "seemingly looking out from its own iconographical context and directly challenging the viewer",[4] was highly unusual in ancient Greek art. History[edit] Gallery[edit] Sources[edit]

Nabataeans Arab people who inhabited northern Arabia and the Southern Levant The Nabataeans, also Nabateans (; Arabic: ٱلْأَنْبَاط‎ al-ʾAnbāṭ , compare Ancient Greek: Ναβαταῖος; Latin: Nabataeus), were an ancient Arab people who inhabited northern Arabia and the southern Levant.[1][2][3][4][5][6][7] Their settlements—most prominently the assumed capital city of Raqmu (present-day Petra, Jordan)[1]—gave the name Nabatene to the Arabian borderland that stretched from the Euphrates to the Red Sea. The Nabataeans were one of several nomadic Bedouin tribes that roamed the Arabian Desert in search of pasture and water for their herds.[8] They emerged as a distinct civilization and political entity between the second and fourth century BCE,[9] with their kingdom centered around a loosely controlled trading network that brought considerable wealth and influence across the ancient world. Origins[edit] The precise origin of this specific tribe of Arab nomads remains uncertain. Culture[edit] Religion[edit]