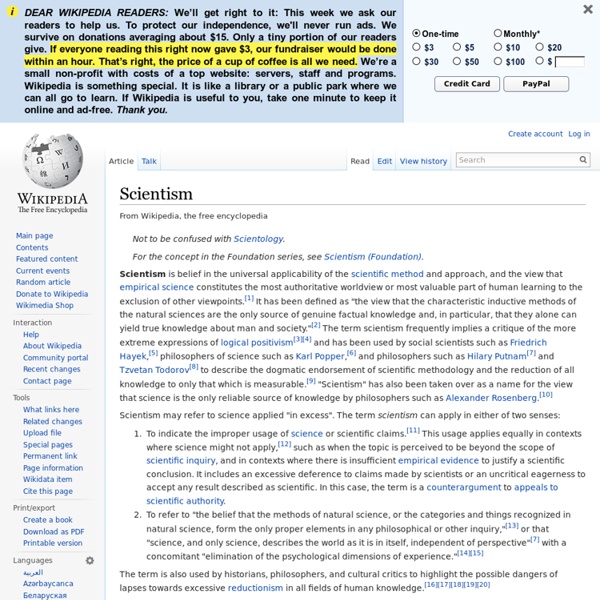 Scientism is belief in the universal applicability of the scientific method and approach, and the view that empirical science constitutes the most authoritative worldview or most valuable part of human learning to the exclusion of other viewpoints.[1] It has been defined as "the view that the characteristic inductive methods of the natural sciences are the only source of genuine factual knowledge and, in particular, that they alone can yield true knowledge about man and society. Scientism may refer to science applied "in excess". The term scientism can apply in either of two senses: To indicate the improper usage of science or scientific claims. The term is also used by historians, philosophers, and cultural critics to highlight the possible dangers of lapses towards excessive reductionism in all fields of human knowledge.[16][17][18][19][20] Overview[edit] Reviewing the references to scientism in the works of contemporary scholars, Gregory R. E. Relevance to science/religion debates[edit]

Thomas Szasz Thomas Stephen Szasz (/ˈsɑːs/ SAHSS; April 15, 1920 – September 8, 2012)[2] was a psychiatrist and academic. Since 1990[3] he had been professor emeritus of psychiatry at the State University of New York Upstate Medical University in Syracuse. He was a well-known social critic of the moral and scientific foundations of psychiatry, and of the social control aims of medicine in modern society, as well as of scientism. Szasz argued that mental illnesses are not real in the sense that cancers are real. His views on special treatment followed from libertarian roots which are based on the principles that each person has the right to bodily and mental self-ownership and the right to be free from violence from others, although he criticized the "Free World" as well as the communist states for their use of psychiatry. Life[edit] Szasz was born to Jewish parents Gyula and Lily Szász on April 15, 1920, in Budapest, Hungary. The rise of Szasz's arguments[edit] Szasz's main arguments[edit]

Occupy Wall Street Movement Part 1: Occupy Wall Street movement: The background of the spark to talk that millions have been waiting for It has been 3 weeks already so time is ripe for a first report on this historic process (sorry Wisconsin). This well may turn into a few part series. As explained in a January article Economic Development Alternatives for United States, the fusionistic groundswell of dissident movements will start shopping for ideas on moving forward. Ron Paul's 19th century reactionaries (and the oligarch backed crypto-fascist republican flavored tea party that co-opted and grew around them) obviously do not provide any real framework when it comes to replacing the current imperial regime of finance capital. Being against something is not being for and therefore it was only a matter of time until the youthful intelligentsia provided another tea party type movement (only from the "left" this time if you're helped by a reference to that dead paradigm). This is different.

John Beebe John Beebe (born June 24, 1939, Washington, D.C.) is a Jungian analyst in practice in San Francisco. He received degrees from Harvard College and the University of Chicago medical school. He is a past President of the C.G. Jung Institute of San Francisco, where he is currently on the teaching faculty, as well as Assistant Clinical Professor of Psychiatry at the University of California Medical School, San Francisco. He is a Distinguished Fellow of the American Psychiatric Association. Professional interests and activities[edit] A popular lecturer in the Jungian world, Beebe has spoken on topics related to the theory and practical applications of analytical psychology to professional and lay audiences throughout the United States as well as in Canada, China, Denmark, England, France, Italy, Germany, Israel, Mexico, and Switzerland. Eight-function model[edit] Publications[edit] Psychiatric Treatment: Crisis, Clinic and Consultation, with C. Publications on psychological type[edit]

Cognitive model A cognitive model is an approximation to animal cognitive processes (predominantly human) for the purposes of comprehension and prediction. Cognitive models can be developed within or without a cognitive architecture, though the two are not always easily distinguishable. History[edit] Cognitive modeling historically developed within cognitive psychology/cognitive science (including human factors), and has received contributions from the fields of machine learning and artificial intelligence to name a few. There are many types of cognitive models, and they can range from box-and-arrow diagrams to a set of equations to software programs that interact with the same tools that humans use to complete tasks (e.g., computer mouse and keyboard). Box-and-arrow models[edit] A number of key terms are used to describe the processes involved in the perception, storage, and production of speech. Computational models[edit] Symbolic[edit] Subsymbolic[edit] Hybrid[edit] Dynamical systems[edit] Locomotion[edit]

Interaction Styles Interaction Styles are groupings of the 16 types of the MBTI instrument of psychometrics and Jungian psychology. The Interaction Styles model was developed by Linda Berens, PhD, founder of the Temperament Research Institute. This model builds on David Keirsey's Temperament model and its subcategories, and is based on observable behavior patterns that are quite similar to David Merrill's "Social Styles" and William Moulton Marston's DiSC theory. Development[edit] Linda V. Comparison and cross-mapping with Keirseyan Temperament[edit] Plus, he also drew more upon the likes of Ernst Kretschmer and Eduard Spranger, who had other models which he correlated with Galen's temperaments (though they were not necessarily perfect matches of them); while others followed Pavlov and Eysenck, who shaped the modern theories of those who held onto the Galenic names. The role of Thinking, Feeling, Judging and Perceiving[edit] Looking at the type division between Directing vs. See also[edit] References[edit]

Two-factor models of personality Beginnings[edit] The Roman physician Galen mapped the four temperaments (sanguine, phlegmatic, choleric and melancholic) to a matrix of hot/cold and dry/wet, taken from the four classical elements.[1] Two of these temperaments, sanguine and choleric, shared a common trait: quickness of response (corresponding to "heat"), while the melancholic and phlegmatic shared the opposite, a longer response (coldness). The melancholic and choleric, however, shared a sustained response (dryness), and the sanguine and phlegmatic shared a short-lived response (wetness). This meant that the choleric and melancholic both would tend to hang on to emotions like anger, and thus appear more serious and critical than the fun-loving sanguine, and the peaceful phlegmatic. These are the basis of the two factors that would define temperament in the modern theory. Development[edit] This theory would also be extended to humans. These he compared to the choleric, phlegmatic, melancholic and sanguine respectively.[4]

Four Temperaments Choleric, melancholic, sanguine, and phlegmatic temperaments Four temperaments is a proto-psychological theory that suggests that there are four fundamental personality types, sanguine (pleasure-seeking and sociable), choleric (ambitious and leader-like), melancholic (analytical and quiet), and phlegmatic (relaxed and peaceful). Most formulations include the possibility of mixtures of the types. The Greek physician Hippocrates (460–370 BC) incorporated the four temperaments into his medical theories as part of the ancient medical concept of humorism, that four bodily fluids affect human personality traits and behaviors. History and development[edit] Choleric, sanguine, melancholic, and phlegmatic temperaments In his Canon of Medicine (a standard medical text at many medieval universities), Persian polymath Avicenna (980–1037 AD) extended the theory of temperaments to encompass "emotional aspects, mental capacity, moral attitudes, self-awareness, movements and dreams Sanguine[edit]

Open Letter to that 53% Guy In the picture, you’re holding up a sheet of paper that says: I am a former Marine. I work two jobs. I wanted to respond to you as a liberal. First, let me say that I think it’s great that you have such a strong work ethic and I agree with you that you have much to be proud of. I have a nephew in the Marine Corps, so I have some idea of how tough that can be. So, if you think being a liberal means that I don’t value hard work or a strong work ethic, you’re wrong. I understand your pride in what you’ve accomplished, but I want to ask you something. Do you really want the bar set this high? Do you really want to spend the rest of your life working two jobs and 60 to 70 hours a week? And what happens if you get sick? Do you plan to get married, have kids? Look, you’re a tough kid. And, believe it or not, there are people out there even tougher than you. And is this really your idea of what life should be like in the greatest country on Earth? Ah, the halcyon days of the 1950s!

Tesla's Biography Tesla Biography Nikola Tesla symbolizes a unifying force and inspiration for all nations in the name of peace and science. He was a true visionary far ahead of his contemporaries in the field of scientific development. New York State and many other states in the USA proclaimed July 10, Tesla’s birthday- Nikola Tesla Day. Many United States Congressmen gave speeches in the House of Representatives on July 10, 1990 celebrating the 134th anniversary of scientist-inventor Nikola Tesla. Senator Levine from Michigan spoke in the US Senate on the same occasion. The street sign “Nikola Tesla Corner” was recently placed on the corner of the 40th Street and 6th Avenue in Manhattan. Nikola Tesla was born on July 10, 1856 in Smiljan, Lika, which was then part of the Austo-Hungarian Empire, region of Croatia. Tesla pointed out the inefficiency of Edison’s direct current electrical powerhouses that have been build up and down the Atlantic seaboard. and household appliances. century. -Dr.