The Roots of Consciousness: Theory, The Biological Perspective 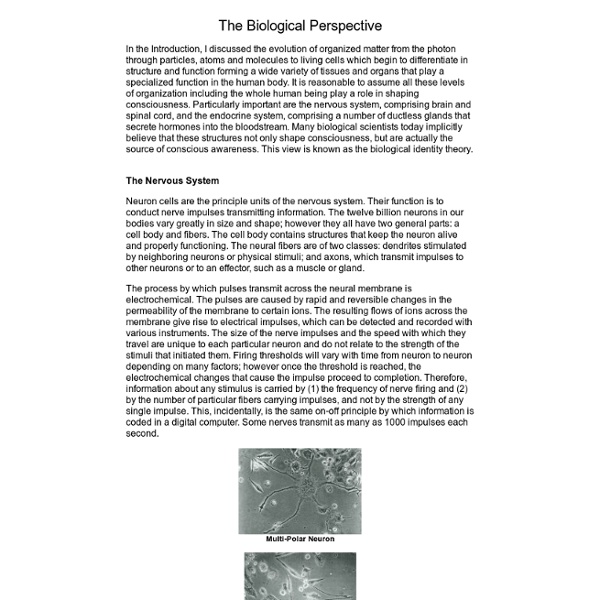 The Biological Perspective In the Introduction, I discussed the evolution of organized matter from the photon through particles, atoms and molecules to living cells which begin to differentiate in structure and function forming a wide variety of tissues and organs that play a specialized function in the human body. It is reasonable to assume all these levels of organization including the whole human being play a role in shaping consciousness. Particularly important are the nervous system, comprising brain and spinal cord, and the endocrine system, comprising a number of ductless glands that secrete hormones into the bloodstream. Many biological scientists today implicitly believe that these structures not only shape consciousness, but are actually the source of conscious awareness. The Nervous System Neuron cells are the principle units of the nervous system. The process by which pulses transmit across the neural membrane is electrochemical. Multi-Polar Neuron Bipolar Neurons Serotonin Related:  The Walk

Self Comes to Mind: Constructing the Conscious Brain by Antonio Damasio - review Consciousness has become a hot topic for brain scientists. Once, we were content to leave the interminable mind/brain problem to philosophers and theologians. Speculation remained a CLM – a career-limiting move — for ambitious young researchers. No longer. Armed with novel tools, from genetic manipulation to brain imaging, flush with funding, and convinced that neuroscience has the key to the human condition, the hunt is on. Experiments, conferences and books proliferate, and philosophers of mind can no longer be taken seriously until they have done an internship in a neurophysiology lab. Neuroscientists, especially those of us trained in the Anglo-American tradition, tend to be as mechanically materialist as was "Darwin's bulldog", Thomas Huxley, in the 19th century, when he remarked that mind is to brain as the whistle is to the steam train – a mere epiphenomenon. Consciousness is a term with multiple meanings. This, briefly summarised, is the latest version of Damasio's theory.

Ancient Psychoactive Incense and Preparations For millennia, humankind has lived with nature, utilizing the flora and fauna to survive. Over the centuries, through trial and error, they learned which plants were the most nutritious, healthy and beneficial, and consequently which plants possessed unique healing, spiritual and magical properties. Early in antiquity, humankind discovered the healing properties and magical qualities of plants like Papaver somniferum, Cannabis sativa and fungi like Amanita muscaria. Although psychoactive incenses have been used for thousands of years, there has been very little modern research into their efficacy and historical use. Currently there are three mechanisms that are believed to cause the psychoactive effects of sacred incense blends. 1) The plant material itself contains pharmacologically active compounds that can induce altered states of consciousness. Pheromones are naturally occurring compounds that are closely related to hormones. Bodhanath Incense Thoroughly dry and mix equal parts:

Think time flies? Well actually, you may be right - Technology & science - Tech and gadgets - Gizmodo Time flies when you're having fun. But you're at work, and work sucks. So how is it 5 p.m. already? When we talk about "losing time," we aren't referring to that great night out, or that week of wonderful vacation, or the three-hour film that honestly didn't feel like more than an hour. No, when we fret about not having enough time, or wonder where exactly all those hours went, we're talking about mundane things. The workday. Why does that happen? First of all, yes In understanding any complex issue, especially a psychological one, intuition doesn't usually get us too far. But not today. "Philosophers have written on (the perception of time) for a long period, and psychology has been interested in it since its inception as a separate discipline — since the late 1800s," explains Dr. Brown says that common wisdom about how time "flies" is basically correct. This jibes with common experience as well as decades of experimentation. The secret, Brown says, is something called habituation.

The Death Delusion « Kensho By Bard Canning “Afraid of dying? Don’t be. It’s never going to happen to you, and I can prove it.” It’s said that Albert Einstein once commented that the most fundamental question we can ever ask ourselves is whether or not the universe we live in is friendly or hostile. He hypothesized that your answer to that question would determine your destiny. Surely death is the greatest threat that we all face. I do not agree. Before outlining my hypothesis, I should make it clear that the aim of my writing is the excavation and study of the truth. To put it simply: I do not believe in death. I do not think that we are immortal, far from it. It has been my experience that once the spectre of death is stripped of its shadowy mask it becomes much easier to contend with as a concept. The Alpha and the Omega “Death, in itself, is nothing; but we fear, To be we know not what, we know not where.” John Dryden It’s All in Your Mind Morpheus – The Matrix Reality is all in our own minds. Is “reality” a dream?