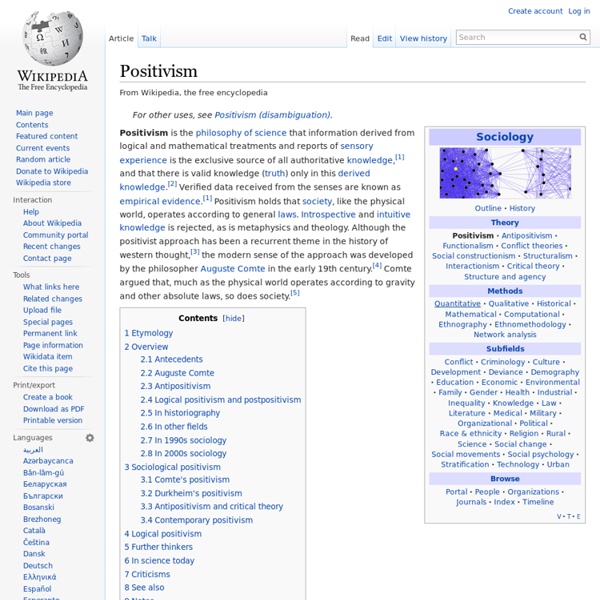 Positivism is the philosophy of science that information derived from logical and mathematical treatments and reports of sensory experience is the exclusive source of all authoritative knowledge,[1] and that there is valid knowledge (truth) only in this derived knowledge.[2] Verified data received from the senses are known as empirical evidence.[1] Positivism holds that society, like the physical world, operates according to general laws. Introspective and intuitive knowledge is rejected, as is metaphysics and theology. Although the positivist approach has been a recurrent theme in the history of western thought,[3] the modern sense of the approach was developed by the philosopher Auguste Comte in the early 19th century.[4] Comte argued that, much as the physical world operates according to gravity and other absolute laws, so does society.[5] Etymology[edit] Overview[edit] Antecedents[edit] Auguste Comte[edit] Antipositivism[edit] Main article: antipositivism In historiography[edit]

Saint-Simonianism Claude Henri de Rouvroy, comte de Saint-Simon Saint-Simonianism was a French political and social movement of the first half of the 19th century, inspired by the ideas of Claude Henri de Rouvroy, comte de Saint-Simon (1760–1825). Saint-Simon has been "variously portrayed as a utopian socialist, the founder of sociology and a prescient madman".[1] His ideas, expressed largely through a succession of journals such as l'Industrie (1816), La politique (1818) and L'Organisateur (1819–20)[2] centered on a perception that growth in industrialization and scientific discovery would have profound changes on society. Saint-Simon's writings[edit] For his last decade Saint-Simon concentrated on themes of political economy. In his last work however, Le Nouveau Christianisme (The New Christianity) (1825), Saint-Simon reverted to more traditional ideas of renewing society through Christian brotherly love. The arts[edit] The movement after Saint-Simon's death[edit] People associated with the movement[edit]

Kantianism Kantianism is the philosophy of Immanuel Kant, a German philosopher born in Königsberg, Prussia (now Kaliningrad, Russia). The term "Kantianism" or "Kantian" is sometimes also used to describe contemporary positions in philosophy of mind, epistemology, and ethics. Ethics[edit] Simply put, this criterion amounts to a thought experiment: to attempt to universalize the maxim (by imagining a world where all people necessarily acted in this way in the relevant circumstances) and then see if the maxim and its associated action would still be conceivable in such a world. For instance, holding the maxim kill anyone who annoys you and applying it universally would result in a world which would soon be devoid of people and without anyone left to kill. Kant's ethics focus then only on the maxim that underlies actions and judges these to be good or bad solely on how they conform to reason. The Formulations of the Categorical Imperative: Teleology[edit] See Kant's Aesthetics and Teleology.

greenpeace Auguste Comte Isidore Auguste Marie François Xavier Comte (19 January 1798 – 5 September 1857), better known as Auguste Comte (French: [oɡyst kɔ̃t]), was a French philosopher. He was a founder of the discipline of sociology and of the doctrine of positivism. He is sometimes regarded as the first philosopher of science in the modern sense of the term.[2] Influenced by the utopian socialist Henri Saint-Simon, Comte developed the positive philosophy in an attempt to remedy the social malaise of the French Revolution, calling for a new social doctrine based on the sciences. Comte was a major influence on 19th-century thought, influencing the work of social thinkers such as Karl Marx, John Stuart Mill, and George Eliot.[3] His concept of sociologie and social evolutionism set the tone for early social theorists and anthropologists such as Harriet Martineau and Herbert Spencer, evolving into modern academic sociology presented by Émile Durkheim as practical and objective social research. Life[edit]

Kant's Aesthetics and Teleology First published Sat Jul 2, 2005; substantive revision Wed Feb 13, 2013 Kant's views on aesthetics and teleology are given their fullest presentation in his Critique of Judgment (Kritik der Urteilskraft, also translated Critique of the Power of Judgment), published in 1790. This work is in two parts, preceded by a long introduction in which Kant explains and defends the work's importance in his critical system overall: in the first part, the “Critique of Aesthetic Judgment,” Kant discusses aesthetic experience and judgment, in particular of the beautiful and the sublime, and also artistic creation; in the second part, the “Critique of Teleological Judgment,” he discusses the role of teleology (that is, appeal to ends, purposes or goals) in natural science and in our understanding of nature more generally. The Critique of Judgment has received less attention than the other two Critiques. 1. 2. Other elements of Kant's theory are sketched in the remainder of the section.

Claude Henri de Rouvroy, comte de Saint-Simon In opposition to the feudal and military system, he advocated a form of state[dubious ]-technocratic socialism, an arrangement where industrialists would lead society and found a national community based on cooperation and technological progress, which would be capable of eliminating poverty of the lower classes. In place of the church, he felt the direction of society should fall to the men of science. Men who are fitted to organize society for productive labour are entitled to rule it.[2] Biography[edit] Early years[edit] Henri de Saint-Simon was born in Paris as a French aristocrat. From his youth, Saint-Simon was highly ambitious. At the beginning of the French Revolution in 1789, Saint-Simon quickly endorsed the revolutionary ideals of liberty, equality and fraternity. Career[edit] Henri de Saint-Simon, portrait from the first quarter of the 19th century The first publication caused a sensation, though one that brought few converts. Death and legacy[edit] Ideas[edit] Politics[edit]

Cubism A primary influence that led to Cubism was the representation of three-dimensional form in the late works of Paul Cézanne, which were displayed in a retrospective at the 1907 Salon d'Automne.[3] In Cubist artwork, objects are analyzed, broken up and reassembled in an abstracted form—instead of depicting objects from one viewpoint, the artist depicts the subject from a multitude of viewpoints to represent the subject in a greater context.[4] Conception and origins[edit] Pablo Picasso, 1909-10, Figure dans un Fauteuil (Seated Nude, Femme nue assise), oil on canvas, 92.1 x 73 cm, Tate Modern, London Cubism began between 1907 and 1911. By 1911 Picasso was recognized as the inventor of Cubism, while Braque’s importance and precedence was argued later, with respect to his treatment of space, volume and mass in the L’Estaque landscapes. John Berger identifies the essence of Cubism with the mechanical diagram. Technical and stylistic aspects[edit] "M. Cubism before 1914[edit]

Olinde Rodrigues Olinde Rodrigues Benjamin Olinde Rodrigues (1795–1851), more commonly known as Olinde Rodrigues, was a French banker, mathematician, and social reformer. Rodrigues was born into a well-to-do Sephardi Jewish family[1] in Bordeaux. Rodrigues was awarded a doctorate in mathematics on 28 June 1815 by the University of Paris.[2] His dissertation contains the result now called Rodrigues' formula.[3] After graduation, Rodrigues became a banker. In 1840 he published a result on transformation groups,[4] which applied Leonhard Euler's four squares formula, a precursor to the quaternions of William Rowan Hamilton, to the problem of representing rotations in space.[5] However, during his own times, his work on mathematics was largely ignored, and he has only been rediscovered late in the twentieth century. Rodrigues is remembered for three results: Rodrigues' rotation formula for vectors; and the Rodrigues formula about series of orthogonal polynomials; and the Euler–Rodrigues parameters. Notes[edit]

Positivism - The Oxford Encyclopedic English Dictionary definition of positivism emphasises its origin in the philosophical view that 'every rationally justifiable assertion can be scientifically verified', but the term has come to be used by some qualitative researchers in order to speak or write derisively about or dismiss as flawed the scientific approach adopted by quantitative researchers.

Positivism - The theoretical paradigm that seeks to obtain knowledge by discovery. It uses the epistemology of objectivism and data collection via empirical observation using the five senses.