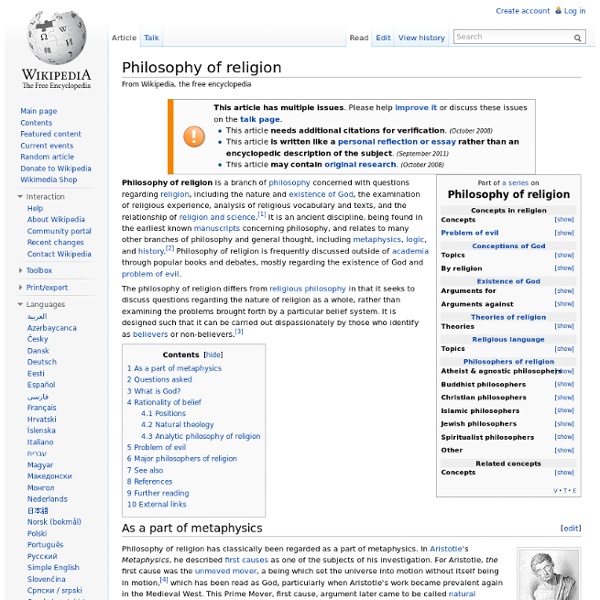 Philosophy of religion is a branch of philosophy concerned with questions regarding religion, including the nature and existence of God, the examination of religious experience, analysis of religious vocabulary and texts, and the relationship of religion and science.[1] It is an ancient discipline, being found in the earliest known manuscripts concerning philosophy, and relates to many other branches of philosophy and general thought, including metaphysics, logic, and history.[2] Philosophy of religion is frequently discussed outside of academia through popular books and debates, mostly regarding the existence of God and problem of evil. The philosophy of religion differs from religious philosophy in that it seeks to discuss questions regarding the nature of religion as a whole, rather than examining the problems brought forth by a particular belief system. It is designed such that it can be carried out dispassionately by those who identify as believers or non-believers.[3] [edit] Aquinas Related:  Philosophy

Perennial philosophy The Perennial philosophy (Latin: philosophia perennis), [note 1] also referred to as Perennialism, is a perspective in the philosophy of religion which views each of the world’s religious traditions as sharing a single, universal truth on which the foundation of all religious knowledge and doctrine has grown. Agostino Steuco (1497–1548) coined the term philosophia perennis,[1] drawing on the neo-Platonic philosophy of Marsilio Ficino (1433–1499) and Giovanni Pico della Mirandola (1463–94). In the early 19th century this idea was popularised by the Transcendentalists. Towards the end of the 19th century the Theosophical Society further popularized the concept under the name of "Wisdom-Religion" or "Ancient Wisdom".[2] In the 20th century it was popularized in the English-speaking world through Aldous Huxley's book The Perennial Philosophy as well as by the strands of thought which culminated in the New Age movement. Definition[edit] Origins[edit] Neo-Platonism[edit] Steuco[edit]

a good question - my attempt in answering it Philosophy of science Philosophy of science is a branch of philosophy concerned with the foundations, methods, and implications of science. The central questions concern what counts as science, the reliability of scientific theories, and the purpose of science. This discipline overlaps with metaphysics, ontology and epistemology, for example, when it explores the relationship between science and truth. There is no consensus on many central problems in philosophy of science, including whether science can reveal the truth about unobservable things and whether scientific reasoning can be justified at all. In addition to these general questions about science as a whole, philosophers of science consider problems that apply to particular sciences such as biology or physics. Some philosophers of science also use contemporary results in science to reach conclusions about philosophy. Today, some thinkers seek to ground science in axiomatic assumptions such as the uniformity of nature. Introduction[edit] History[edit]

Stanford Encyclopedia of Philosophy Ancient Philosophy How to Live: Lessons from Montaigne, Godfather of Blogging by Maria Popova Don’t worry about death, pay attention, read a lot, give up control, embrace imperfection. “Living has yet to be generally recognized as one of the arts,” Karl De Schweinitz wrote in his 1924 guide to the art of living. But this is an art best understood not as a set of prescriptive techniques but, per Susan Sontag’s definition of art, a form of consciousness — which means an understanding that is constantly evolving. This idea — writing about oneself to create a mirror in which other people recognize their own humanity — has not existed forever. Portrait of Michel de Montaigne by Salvador Dalí, 1947. What separated Montaigne from other memoirists of his day was that he didn’t write about his daily deeds and his achievements — rather, he contemplated the meaning of life from all possible angles, and in the process popularized the essay as a form. Moral dilemmas interested Montaigne, but he was less interested in what people ought to do than in what they actually did.

Modern Philosophy The Shortness of Life: Seneca on Busyness and the Art of Living Wide Rather Than Living Long “How we spend our days,” Annie Dillard memorably wrote in her soul-stretching meditation on the life of presence, “is, of course, how we spend our lives.” And yet most of us spend our days in what Kierkegaard believed to be our greatest source of unhappiness — a refusal to recognize that “busy is a decision” and that presence is infinitely more rewarding than productivity. I frequently worry that being productive is the surest way to lull ourselves into a trance of passivity and busyness the greatest distraction from living, as we coast through our lives day after day, showing up for our obligations but being absent from our selves, mistaking the doing for the being. Despite a steadily swelling human life expectancy, these concerns seem more urgent than ever — and yet they are hardly unique to our age. Seneca writes: It is not that we have a short time to live, but that we waste a lot of it. To those who so squander their time, he offers an unambiguous admonition: Thanks, Liz

How to Be Alone: An Antidote to One of the Central Anxieties and Greatest Paradoxes of Our Time by Maria Popova “We live in a society which sees high self-esteem as a proof of well-being, but we do not want to be intimate with this admirable and desirable person.” If the odds of finding one’s soul mate are so dreadfully dismal and the secret of lasting love is largely a matter of concession, is it any wonder that a growing number of people choose to go solo? The choice of solitude, of active aloneness, has relevance not only to romance but to all human bonds — even Emerson, perhaps the most eloquent champion of friendship in the English language, lived a significant portion of his life in active solitude, the very state that enabled him to produce his enduring essays and journals. And yet that choice is one our culture treats with equal parts apprehension and contempt, particularly in our age of fetishistic connectivity. Solitude, the kind we elect ourselves, is met with judgement and enslaved by stigma. Illustration by Alessandro Sanna from 'The River.' Donating = Loving