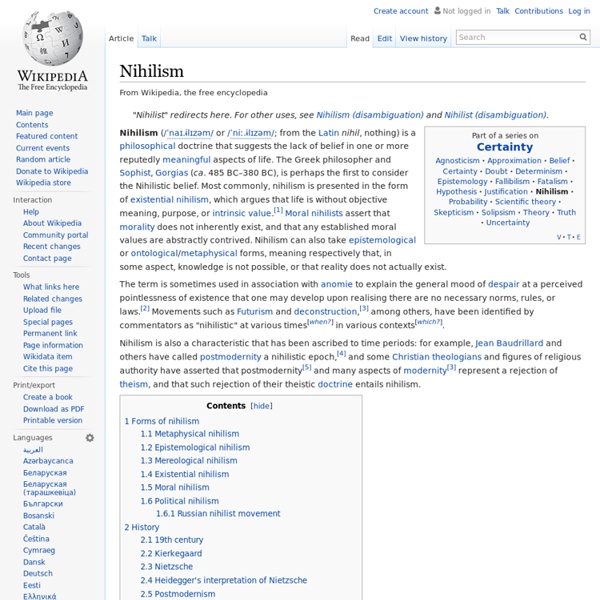 Nihilism is also a characteristic that has been ascribed to time periods: for example, Jean Baudrillard and others have called postmodernity a nihilistic epoch,[4] and some Christian theologians and figures of religious authority have asserted that postmodernity[5] and many aspects of modernity[3] represent a rejection of theism, and that such rejection of their theistic doctrine entails nihilism. Forms of nihilism[edit] Nihilism has many definitions, and thus can describe philosophical positions that are arguably independent. [edit] Metaphysical nihilism is the philosophical theory that there might be no objects at all—that is, that there is a possible world where there are no objects at all—or at least that there might be no concrete objects at all—so that even if every possible world contains some objects, there is at least one that contains only abstract objects. Epistemological nihilism[edit] Mereological nihilism[edit] This interpretation of existence must be based on resolution.

Skepticism Skepticism or scepticism (see American and British English spelling differences) is generally any questioning attitude towards knowledge, facts, or opinions/beliefs stated as facts,[1] or doubt regarding claims that are taken for granted elsewhere.[2] Philosophical skepticism is an overall approach that requires all information to be well supported by evidence.[3] Classical philosophical skepticism derives from the 'Skeptikoi', a school who "asserted nothing".[4] Adherents of Pyrrhonism, for instance, suspend judgment in investigations.[5] Skeptics may even doubt the reliability of their own senses.[6] Religious skepticism, on the other hand, is "doubt concerning basic religious principles (such as immortality, providence, and revelation)".[7] Definition[edit] In ordinary usage, skepticism (US) or scepticism (UK) (Greek: 'σκέπτομαι' skeptomai, to think, to look about, to consider; see also spelling differences) refers to:

Muhammad ibn Abd al-Wahhab His pact with Muhammad bin Saud helped to establish the first Saudi state[5] and began a dynastic alliance and power-sharing arrangement between their families which continues to the present day in the Kingdom of Saudi Arabia.[6] The descendants of Ibn ʿAbd al-Wahhab, the Al ash-Sheikh, have historically led the ulama in the Saudi state,[7] dominating the state's clerical institutions.[8] Early years[edit] Ibn ʿAbd al-Wahhab is generally acknowledged[9] to have been born in 1703[10] into the sedentary Arab clan of Banu Tamim[11] (the Banu Tamim were not a nomadic tribe) in 'Uyayna, a village in the Najd region of the modern Saudi Arabia.[10][12] He was thought to have started studying Islam at an early age, primarily with his father, ʿAbd al-Wahhab[13][14] as his family was from a line of scholars of the Hanbali school of jurisprudence.[15] Following his early education in Medina, Abdul Wahhab traveled outside of the peninsula, venturing first to Basra.

Cosmicism Not to be confused with the movements known as Cosmism. Cosmicism is the literary philosophy developed and used by the American writer H. P. Friedrich Heinrich Jacobi Friedrich Heinrich Jacobi (25 January 1743 – 10 March 1819) was an influential German philosopher, literary figure, socialite, and the younger brother of poet Johann Georg Jacobi. He is notable for coining the term nihilism and promoting it as the prime fault of Enlightenment thought particularly in the philosophical systems of Baruch Spinoza, Immanuel Kant, Johann Fichte and Friedrich Schelling.[1] Instead of speculative reason, he advocated Glaube (variously translated as faith or "belief") and revelation. In this sense, Jacobi anticipated present-day writers who criticize secular philosophy as relativistic and dangerous for religious faith. In his time, he was also well-known among literary circles for his critique of the Sturm and Drang movement, and implicitly close associate Johann Wolfgang von Goethe, and its visions of atomized individualism. His literary projects were devoted to the reconciliation of Enlightenment individualism with social obligation. Biography[edit]

Epistemology Epistemology ( i/ᵻˌpɪstᵻˈmɒlədʒi/; from Greek ἐπιστήμη, epistēmē, meaning "knowledge", and λόγος, logos, meaning "logical discourse") is the branch of philosophy concerned with the theory of knowledge.[1] Epistemology studies the nature of knowledge, justification, and the rationality of belief. Muhammad bin Saud Muhammad ibn Saud (Arabic: محمد بن سعود ‎) (d. 1765), also known as Ibn Saud, was the emir of Al-Dir'iyyah and is considered the founder of the First Saudi State and the Saud dynasty, which are technically named for his father – Saud ibn Muhammad ibn Migrin. Ibn Saud's family (then known as the Al Migrin) traced its descent to the tribe of 'Anizzah but, despite popular misconceptions, Muhammad ibn Saud was neither a nomadic bedouin nor was he a tribal leader. Rather, he was the chief (emir) of an agricultural settlement near modern-day Riyadh, called Diriyyah.[1] Furthermore, he was a competent and ambitious desert warrior.[1] Alliance with Muhammad bin Abdul-Wahhab[edit] Using the ideology of Ibn Abdul-Wahhab, Ibn Saud helped establish the House of Saud among other forces in the Arabian peninsula. The use of religion as a basis for legitimacy differentiated the House of Saud from neighboring clans and built support.

Awe This Atlanta lightning strike might have inspired awe. One dictionary definition is "an overwhelming feeling of reverence, admiration, fear, etc., produced by that which is grand, sublime, extremely powerful, or the like: in awe of God; in awe of great political figures."[3] Another dictionary definition is a "mixed emotion of reverence, respect, dread, and wonder inspired by authority, genius, great beauty, sublimity, or might: We felt awe when contemplating the works of Bach. The observers were in awe of the destructive power of the new weapon Fathers and Sons Father and Son or Fathers and Sons may refer to: In literature[edit] In music[edit] Onscreen[edit] In film[edit]

Albert Camus Albert Camus (French: [albɛʁ kamy] ( Camus did not consider himself to be an existentialist despite usually being classified as one, even during his own lifetime.[1] In an interview in 1945, Camus rejected any ideological associations: "No, I am not an existentialist. Sartre and I are always surprised to see our names linked...".[2] Camus was born in French Algeria to a Pied-Noir family, and studied at the University of Algiers. In 1949, Camus founded the Group for International Liaisons within the Revolutionary Union Movement after his split with Garry Davis's Citizens of the World movement.[3] The formation of this group, according to Camus, was intended to "denounce two ideologies found in both the USSR and the USA" regarding their idolatry of technology.[4]