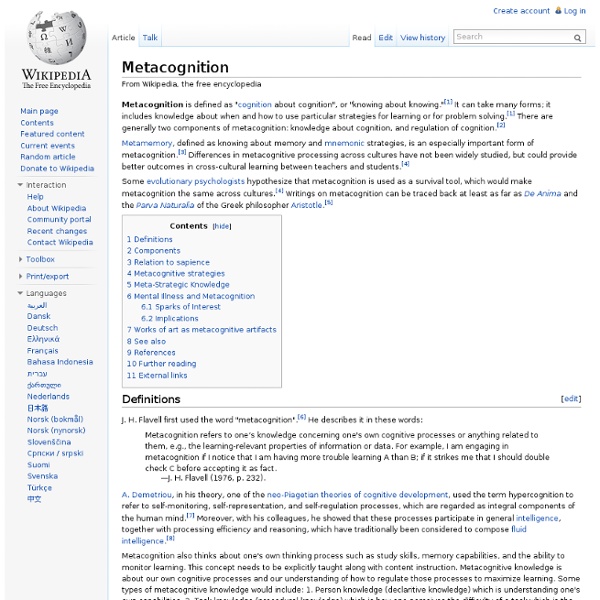 Metacognition is defined as "cognition about cognition", or "knowing about knowing". It comes from the root word "meta", meaning beyond.[1] It can take many forms; it includes knowledge about when and how to use particular strategies for learning or for problem solving.[1] There are generally two components of metacognition: knowledge about cognition, and regulation of cognition.[2] Metamemory, defined as knowing about memory and mnemonic strategies, is an especially important form of metacognition.[3] Differences in metacognitive processing across cultures have not been widely studied, but could provide better outcomes in cross-cultural learning between teachers and students.[4] Some evolutionary psychologists hypothesize that metacognition is used as a survival tool, which would make metacognition the same across cultures.[4] Writings on metacognition can be traced back at least as far as De Anima and the Parva Naturalia of the Greek philosopher Aristotle.[5] Definitions[edit] [edit]

The Five Educational Learning Theories Educational Learning Theories While studying to become a teacher, whether in a bachelor's degree or alternative certificate program, you will learn about learning theories. There are 5 overarching paradigms of educational learning theories; behaviorism, cognitivism, constructivism, design/brain-based, humanism and 21st Century skills. How Grid Computing Works A scientist studying proteins logs into a computer and uses an entire network of computers to analyze data. A businessman accesses his company's network through a PDA in order to forecast the future of a particular stock. An Army official accesses and coordinates computer resources on three different military networks to formulate a battle strategy. All of these scenarios have one thing in common: They rely on a concept called grid computing. At its most basic level, grid computing is a computer network in which each computer's resources are shared with every other computer in the system.

Choosing the Right Learning Theory for Education There are many learning theories in existence today, and they are developed by both teachers and learners. They include constructivism, behaviorism, multiple intelligences and others. It is up to you to decide which learning theory suits your students the best. Behaviorism is a learning theory that is easy to understand as it relies on observable behavior to describe several universal laws of human nature. How the Internet of Things Works Many of us have dreamed of smart homes where our appliances do our bidding automatically. The alarm sounds and the coffee pot starts brewing the moment you want to start your day. Lights come on as you walk through the house.

Best universities for education degrees An education degree can open the doors to working and teaching in schools as well as carrying out research into how we learn. Times Higher Education has ranked the best universities for education degrees to help you decide on the best university for you. Stanford University and Harvard University take the top spots in the ranking, with the University of Oxford taking fifth place. The University of Hong Kong is the only university in Asia to rank in the top 10, at number four, and the University of Cambridge rounds off the top 10. The remainder of the top 10 is dominated by US universities. US universities are well-represented in the entire subject ranking for education, with 118 universities. What is the IoT? Everything you need to know about the Internet of Things right now What is the Internet of Things? The Internet of Things, or IoT, refers to the billions of physical devices around the world that are now connected to the internet, all collecting and sharing data. Thanks to the arrival of super-cheap computer chips and the ubiquity of wireless networks, it's possible to turn anything, from something as small as a pill to something as big as an aeroplane, into a part of the IoT.

Implications Of Learning Theories On Instructional Design Let's look closer at each learning theory, one at a time, explaining not only their definitions but also their implication on ID today. Behaviorist Learning Theory 1. Definition Edge computing: The state of the next IT transformation In recent years, computing workloads have been migrating: first from on-premises data centres to the cloud and now, increasingly, from cloud data centres to 'edge' locations where they are nearer the source of the data being processed. The goal? To boost the performance and reliability of apps and services, and reduce cost of running them, by shortening the distance data has to travel, thereby mitigating bandwidth and latency issues.

The Growth of Visual Learning Infographic Other Infographics The Growth of Visual Learning Infographic The Growth of Visual Learning Infographic Before there was language, we had images. Though today we express ourselves through words and writing, our ancient ancestors would communicate through symbols and drawings. And despite the flexibility of thought that words given us, our brains are essentially image processors that are far more effective when working with visual information. What is edge computing and how it’s changing the network Edge computing allows data produced by internet of things (IoT) devices to be processed closer to where it is created instead of sending it across long routes to data centers or clouds. Doing this computing closer to the edge of the network lets organizations analyze important data in near real-time – a need of organizations across many industries, including manufacturing, health care, telecommunications and finance. “In most scenarios, the presumption that everything will be in the cloud with a strong and stable fat pipe between the cloud and the edge device – that’s just not realistic,” says Helder Antunes, senior director of corporate strategic innovation at Cisco.

Culture, Curation, Contribution, Collaboration: The 4 Cs for Future Learning Organizations You Say "Evolution," I Say "Disruption" Thousands of articles have been written in the last few years about the changes that are happening to learning within organizations. Some refer to those changes as ‘disruption’ while others call it ‘evolution’, but whether it is positive or negative everyone agrees that it has come quickly and seems to be accelerating into the future.