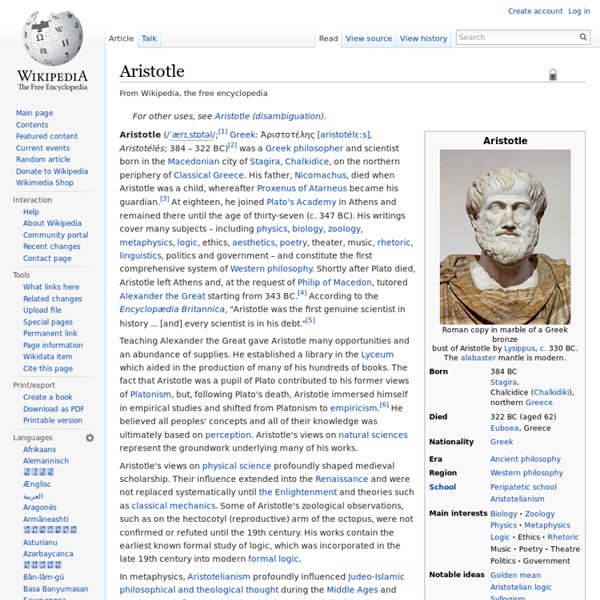 Aristotle's views on physical science profoundly shaped medieval scholarship. Their influence extended into the Renaissance and were not replaced systematically until the Enlightenment and theories such as classical mechanics. Some of Aristotle's zoological observations, such as on the hectocotyl (reproductive) arm of the octopus, were not confirmed or refuted until the 19th century. His works contain the earliest known formal study of logic, which was incorporated in the late 19th century into modern formal logic. His ethics, though always influential, gained renewed interest with the modern advent of virtue ethics. All aspects of Aristotle's philosophy continue to be the object of active academic study today. The sum of his work's influence often ranks him among the world's top personalities of all time with the greatest influence, along with his teacher Plato, and his pupil Alexander the Great.[9][10] Life Aristotle was appointed as the head of the royal academy of Macedon. Thought

Diogenes Laërtius Diogenes Laertius (/daɪˈɒdʒɨniːz leɪˈɜrʃiəs/;[1] Greek: Διογένης Λαέρτιος, Diogenēs Laertios; fl. c. 3rd century CE) was a biographer of the Greek philosophers. Nothing is known about his life, but his surviving Lives and Opinions of Eminent Philosophers is a principal source for the history of Greek philosophy. Life[edit]

Hermes ancient Greek god of boundaries, roads, merchants, and thieves Hermes (; Greek: Ἑρμῆς) is a deity in ancient Greek religion and mythology. Hermes is considered the herald of the gods, as well as the protector of human heralds, travellers, thieves,[1] merchants, and orators.[2][3] He is able to move quickly and freely between the worlds of the mortal and the divine, aided by his winged sandals.

Carl Rogers Carl Ransom Rogers (January 8, 1902 – February 4, 1987) was an influential American psychologist and among the founders of the humanistic approach (or client-centered approach) to psychology. Rogers is widely considered to be one of the founding fathers of psychotherapy research and was honored for his pioneering research with the Award for Distinguished Scientific Contributions by the American Psychological Association (APA) in 1956. The person-centered approach, his own unique approach to understanding personality and human relationships, found wide application in various domains such as psychotherapy and counseling (client-centered therapy), education (student-centered learning), organizations, and other group settings.

'Allegory of the Cave' Plato has Socrates describe a gathering of people who have lived chained to the wall of a cave all of their lives, facing a blank wall. The people watch shadows projected on the wall by things passing in front of a fire behind them, and begin to designate names to these shadows. The shadows are as close as the prisoners get to viewing reality. He then explains how the philosopher is like a prisoner who is freed from the cave and comes to understand that the shadows on the wall do not make up reality at all, as he can perceive the true form of reality rather than the mere shadows seen by the prisoners. The Allegory may be related to Plato's Theory of Forms, according to which the "Forms" (or "Ideas"/"Archetypes"), and not the material world of change known to us through sensation, possess the highest and most fundamental kind of reality. Synopsis[edit]

Xenophon Xenophon (/ˈzɛnəfən/; Greek: Ξενοφῶν, Xenophōn, Greek pronunciation: [ksenopʰɔ̂ːn]; c. 430 – 354 BC), son of Gryllus, of the deme Erchia of Athens, also known as Xenophon of Athens, was a Greek historian, soldier, mercenary, and student of Socrates. While not referred to as a philosopher by his contemporaries, his status as such is recently a popular topic of debate. He is known for writing about the history of his own times, the late 5th and early 4th centuries BC, especially for his account of the final years of the Peloponnesian War.

Napoleon Imperial Standard of Napoleon I Napoléon Bonaparte (/nəˈpoʊliən, -ˈpoʊljən/;[2] French: [napɔleɔ̃ bɔnapaʁt], born Napoleone di Buonaparte; 15 August 1769 – 5 May 1821) was a French military and political leader who rose to prominence during the latter stages of the French Revolution and its associated wars. As Napoleon I, he was Emperor of the French from 1804 to 1814 and again in 1815. Napoleon dominated European affairs for almost two decades while leading France against a series of coalitions in the Revolutionary Wars and the Napoleonic Wars. He won the large majority of his battles and seized control of most of continental Europe before his ultimate defeat in 1815.

John Dewey John Dewey (/ˈduːi/; FAA October 20, 1859 – June 1, 1952) was an American philosopher, psychologist, and educational reformer whose ideas have been influential in education and social reform. Dewey is one of the primary figures associated with philosophy of pragmatism and is considered one of the founders of functional psychology. A well-known public intellectual, he was also a major voice of progressive education and liberalism.[2][3] Although Dewey is known best for his publications concerning education, he also wrote about many other topics, including epistemology, metaphysics, aesthetics, art, logic, social theory, and ethics. Known for his advocacy of democracy, Dewey considered two fundamental elements—schools and civil society—as being major topics needing attention and reconstruction to encourage experimental intelligence and plurality. Life and works[edit]

Socrates - Philosopher Socrates (/ˈsɒkrətiːz/;[2] Greek: Σωκράτης [sɔːkrátɛːs], Sōkrátēs; 470/469 – 399 BC)[1] was a classical Greek (Athenian) philosopher credited as one of the founders of Western philosophy. He is an enigmatic figure known chiefly through the accounts of classical writers, especially the writings of his students Plato and Xenophon and the plays of his contemporary Aristophanes. Plato's dialogues are among the most comprehensive accounts of Socrates to survive from antiquity, though it is unclear the degree to which Socrates himself is "hidden behind his 'best disciple', Plato".[3] Through his portrayal in Plato's dialogues, Socrates has become renowned for his contribution to the field of ethics, and it is this Platonic Socrates who lends his name to the concepts of Socratic irony and the Socratic method, or elenchus.

Sophocles Life[edit] A marble relief of a poet, perhaps Sophocles Sophocles, the son of Sophilus, was a wealthy member of the rural deme (small community) of Colonus Hippius in Attica, which was to become a setting for one of his plays, and he was probably born there.[2][6] He was born a few years before the Battle of Marathon in 490 BC: the exact year is unclear, although 497/6 is the most likely.[2][7] Sophocles was born into a wealthy family (his father was an armour manufacturer) and was highly educated. Sophocles' first artistic triumph was in 468 BC, when he took first prize in the Dionysia theatre competition over the reigning master of Athenian drama, Aeschylus.[2][8] According to Plutarch, the victory came under unusual circumstances.

Mencius A key belief of his was that humans are innately good, but that this quality requires cultivation and the right environment to flourish. He also taught that rulers must justify their position of power by acting benevolently towards their subjects, and in this sense they are subordinate to the masses. Life[edit] An image of Mencius in the sanctuary of the Mencius Temple, Zoucheng

Jacques Derrida Jacques Derrida (/ʒɑːk ˈdɛrɨdə/; French: [ʒak dɛʁida]; born Jackie Élie Derrida;[1] July 15, 1930 – October 9, 2004) was a French philosopher, born in French Algeria. Derrida is best known for developing a form of semiotic analysis known as deconstruction. He is one of the major figures associated with post-structuralism and postmodern philosophy.[3][4][5] During his career Derrida published more than 40 books, together with hundreds of essays and public presentations. Plato - Philosopher Plato (/ˈpleɪtoʊ/; Greek: Πλάτων Plátōn "broad"pronounced [plá.tɔːn] in Classical Attic; 428/427 or 424/423 – 348/347 BCE) was a philosopher, as well as mathematician, in Classical Greece. He is considered an essential figure in the development of philosophy, especially the Western tradition, and he founded the Academy in Athens, the first institution of higher learning in the Western world. Along with his teacher Socrates and his most famous student, Aristotle, Plato laid the foundations of Western philosophy and science.[2] Alfred North Whitehead once noted: "the safest general characterization of the European philosophical tradition is that it consists of a series of footnotes to Plato."

Pythagoras Pythagoras of Samos (/pɪˈθæɡərəs/; Ancient Greek: Πυθαγόρας ὁ Σάμιος Pythagóras ho Sámios “Pythagoras the Samian”, or simply Πυθαγόρας; Πυθαγόρης in Ionian Greek; c. 570 BC – c. 495 BC)[1][2] was an Ionian Greek philosopher, mathematician, and founder of the religious movement called Pythagoreanism. Most of the information about Pythagoras was written down centuries after he lived, so very little reliable information is known about him. He was born on the island of Samos, and might have travelled widely in his youth, visiting Egypt and other places seeking knowledge.