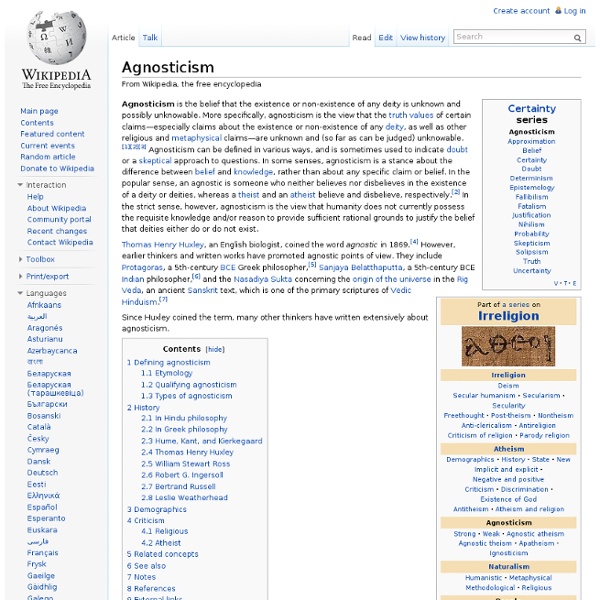 Agnosticism is the view that the truth values of certain claims—especially claims about the existence or non-existence of any deity, as well as other religious and metaphysical claims—are unknown or unknowable.[1][2][3] According to the philosopher William L. Rowe, in the popular sense, an agnostic is someone who neither believes nor disbelieves in the existence of a deity or deities, whereas a theist and an atheist believe and disbelieve, respectively.[2] Thomas Henry Huxley, an English biologist, coined the word agnostic in 1869. However, earlier thinkers have written works that promoted agnostic points of view. These thinkers include Sanjaya Belatthaputta, a 5th-century BCE Indian philosopher who expressed agnosticism about any afterlife,[4][5][6] Protagoras, a 5th-century BCE Greek philosopher was agnostic about the gods.[7] The Nasadiya Sukta in the Rigveda is agnostic about the origin of the universe.[8][9][10] Defining agnosticism[edit] Thomas Henry Huxley said:[11][12] Robert G.

Methodism The Methodist movement is a group of historically-related denominations of Protestant Christianity which derive their inspiration from the life and teachings of John Wesley. George Whitefield and John's brother Charles Wesley were also significant leaders in the movement. It originated as a revival within the 18th-century Church of England and became a separate Church following Wesley's death. Early Methodists were drawn from all levels of society, including the aristocracy,[a] but the Methodist preachers took the message to labourers and criminals who tended to be left outside organized religion at that time. Origins[edit] John Wesley Charles Wesley George Whitefield The Methodist revival originated in Epworth, Lincolnshire, England. People are all, by nature, "dead in sin," and, consequently, "children of wrath." Methodist preachers were notorious for their enthusiastic sermons and often accused of fanaticism. Theology[edit] Liturgy[edit] A United Methodist minister consecrating communion

Deism Deism ( i/ˈdiː.ɪzəm/[1][2] or /ˈdeɪ.ɪzəm/) is the belief that reason and observation of the natural world are sufficient to determine the existence of a Creator, accompanied with the rejection of revelation and authority as a source of religious knowledge.[3][4][5][6][7] Deism gained prominence in the 17th and 18th centuries during the Age of Enlightenment—especially in Britain, France, Germany, and the United States—among intellectuals raised as Christians who believed in one god, but found fault with organized religion and did not believe in supernatural events such as miracles, the inerrancy of scriptures, or the Trinity.[8] Deism is derived from deus, the Latin word for god. Overview[edit] Deism is a theological position concerning the relationship between "the Creator" and the natural world. The words deism and theism are both derived from words for god: the former from Latin deus, the latter from Greek theós (θεός). Features of deism[edit] Critical elements of deist thought included:

Chaos magic The chaosphere is a popular symbol of chaos magic. Many variants exist. For more, see Symbol of Chaos. General principles[edit] Chaos magicians are often seen by other occultists as dangerous or worrisome revolutionaries.[2] History[edit] Origins and creation[edit] This magical discipline was first formulated in West Yorkshire, England in the 1970s.[4] A meeting between Peter J. Influences[edit] Following Spare's death, magicians continued to experiment outside of traditional magical orders. Early days[edit] The first edition of Liber Null does not include the term "chaos magic", but only refers to magic or "the magic art" in general.[6] Texts from this period consistently claim to state principles universal to magic, as opposed to a new specific style or tradition of magic, and describe their innovations as efforts to rid magic of superstitious and religious ideas. Chaos came to be part of this movement defined as "the 'thing' responsible for the origin and continued action of events[...].

Gnosis Etymology[edit] Gnosis is a feminine Greek noun, which means "knowledge".[2] It is often used for personal knowledge compared with intellectual knowledge (eidein), as with the French connaitre compared with savoir, or the German kennen rather than wissen.[3] Related adjective gnostikos[edit] A related term is the adjective gnostikos, "cognitive,"[4] a reasonably common adjective in Classical Greek.[5] Plato uses the plural adjective γνωστικοί – gnostikoi and the singular feminine adjective γνωστικὴ ἐπιστήμη – gnostike episteme in his Politikos where Gnostike episteme was also used to indicate one's aptitude. Plato The Statesman 258e— Stranger: In this way, then, divide all science into two arts, calling the one practical (praktikos), and the other purely intellectual (gnostikos). In the Hellenistic era the term became associated with the mystery cults. Hellenic philosophy[edit] Judeo-Christian usage[edit] Hellenistic Jewish literature[edit] New Testament[edit] The "Gnostic" sects[edit]

Commons Baptists Baptists are individuals who comprise a group of denominations and churches that subscribe to a doctrine that baptism should be performed only for professing believers (believer's baptism, as opposed to infant baptism), and that it must be done by complete immersion (as opposed to affusion or sprinkling). Other tenets of Baptist churches include soul competency (liberty), salvation through faith alone, scripture alone as the rule of faith and practice, and the autonomy of the local congregation. Baptists recognize two ministerial offices, pastors and deacons. Diverse from their beginning, those identifying as Baptists today differ widely from one another in what they believe, how they worship, their attitudes toward other Christians, and their understanding of what is important in Christian discipleship.[2] Origins[edit] English separatist view[edit] During the Protestant Reformation, the Church of England (Anglicans) separated from the Roman Catholic Church. Perpetuity view[edit]

Life sciences The life sciences comprise the fields of science that involve the scientific study of living organisms – such as microorganisms, plants, animals, and human beings – as well as related considerations like bioethics. While biology remains the centerpiece of the life sciences, technological advances in molecular biology and biotechnology have led to a burgeoning of specializations and interdisciplinary fields.[1] Some life sciences focus on a specific type of life. The life sciences are helpful in improving the quality and standard of life. There is considerable overlap between many of the topics of study in the life sciences. Topics of study[edit] Affective neuroscience[edit] Anatomy[edit] Sagittal MRI scan of the head Astrobiology[edit] Biochemistry[edit] A schematic of hemoglobin. Biocomputers[edit] Biocomputers use systems of biologically derived molecules, such as DNA and proteins, to perform computational calculations involving storing, retrieving, and processing data. Biocontrol[edit]

Encyclopedia Britannica Pentecostalism Like other forms of evangelical Protestantism, Pentecostalism adheres to the inerrancy of scripture and the necessity of accepting Christ as personal Lord and Savior. It is distinguished by belief in the baptism with the Holy Spirit as an experience separate from conversion that enables a Christian to live a Holy Spirit–filled and empowered life. This empowerment includes the use of spiritual gifts such as speaking in tongues and divine healing—two other defining characteristics of Pentecostalism. Because of their commitment to biblical authority, spiritual gifts, and the miraculous, Pentecostals tend to see their movement as reflecting the same kind of spiritual power and teachings that were found in the Apostolic Age of the early church. Pentecostalism emerged in the early 20th century among radical adherents of the Holiness movement, who were energized by revivalism and expectation for the imminent Second Coming of Christ. Beliefs[edit] Salvation[edit] Divine healing[edit]