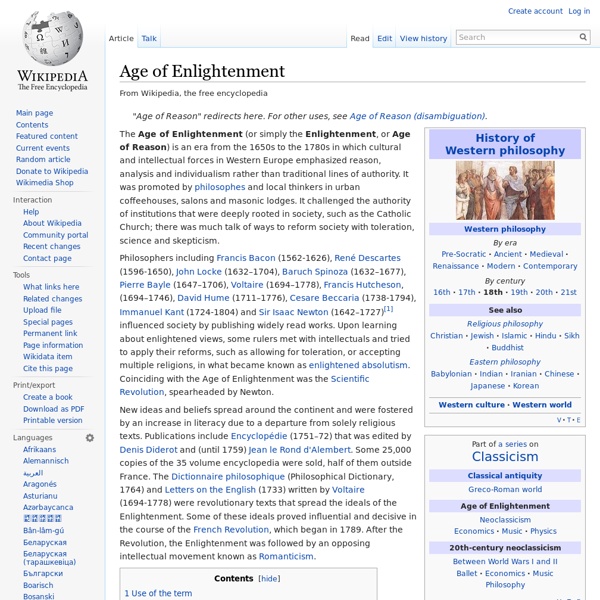 The Age of Enlightenment (or simply the Enlightenment, or Age of Reason) is an era from the 1650s to the 1780s in which cultural and intellectual forces in Western Europe emphasized reason, analysis and individualism rather than traditional lines of authority. It was promoted by philosophes and local thinkers in urban coffeehouses, salons and masonic lodges. It challenged the authority of institutions that were deeply rooted in society, such as the Catholic Church; there was much talk of ways to reform society with toleration, science and skepticism. New ideas and beliefs spread around the continent and were fostered by an increase in literacy due to a departure from solely religious texts. Publications include Encyclopédie (1751–72) that was edited by Denis Diderot and (until 1759) Jean le Rond d'Alembert. Some 25,000 copies of the 35 volume encyclopedia were sold, half of them outside France. Use of the term[edit] If there is something you know, communicate it. Time span[edit]

Secret society "Secret Society Buildings at Yale College", by Alice Donlevy[1] ca. 1880. Pictured are: Psi Upsilon (Beta Chapter), 120 High Street. Left center: Skull & Bones (Russell Trust Association), 64 High Street. Right center: Delta Kappa Epsilon (Phi Chapter), east side of York Street, south of Elm Street. Bottom: Scroll and Key (Kingsley Trust Association), 490 College Street. A secret society is a club or organization whose activities, events, and inner functioning are concealed from non-members. Dust Bowl Period of severe dust storms in North America The Dust Bowl has been the subject of many cultural works, notably the novel The Grapes of Wrath (1939) by John Steinbeck, the folk music of Woody Guthrie, and photographs depicting the conditions of migrants by Dorothea Lange. Geographic characteristics and early history Recognizing the challenge of cultivating marginal arid land, the United States government expanded on the 160 acres (65 ha) offered under the Homestead Act – granting 640 acres (260 ha) to homesteaders in western Nebraska under the Kinkaid Act (1904) and 320 acres (130 ha) elsewhere in the Great Plains under the Enlarged Homestead Act of 1909. Waves of European settlers arrived in the plains at the beginning of the 20th century.

Byzantine Empire The Byzantine Empire, alternatively known as the Eastern Roman Empire, was the predominantly Greek-speaking eastern half continuation and remainder of the Roman Empire during Late Antiquity and the Middle Ages. Its capital city was Constantinople (modern-day Istanbul), originally founded as Byzantium. It survived the fragmentation and fall of the Western Roman Empire in the 5th century AD and continued to exist for an additional thousand years until it fell to the Ottoman Turks in 1453. During most of its existence, the empire was the most powerful economic, cultural, and military force in Europe. Both "Byzantine Empire" and "Eastern Roman Empire" are historiographical terms created after the end of the realm; its citizens continued to refer to their empire as the Roman Empire (Ancient Greek: Βασιλεία Ῥωμαίων, tr. Basileia Rhōmaiōn; Latin: Imperium Romanum), or Romania (Ῥωμανία), and to themselves as "Romans".

Hendrik Christian Andersen Hendrik Christian Andersen (April 15, 1872, in Bergen – December 19, 1940, in Rome) was a Norwegian-American sculptor, painter and urban planner. Background[edit] Andersen was born in Bergen, Norway, of parents Anders Andersen from Lærdal and Helene Monsine Monsen from Bergen. He immigrated as an infant with his family to Newport, Rhode Island the following year. As a young man in Newport, Andersen began his work as a sculptor and learned to mingle among the city’s wealthy elite, including serving as an art instructor for Gertrude Vanderbilt Whitney.[1] In 1893, Andersen traveled to Europe to study art and eventually settled in Rome.

Anemia Anemia is the most common disorder of the blood. The several kinds of anemia are produced by a variety of underlying causes. It can be classified in a variety of ways, based on the morphology of RBCs, underlying etiologic mechanisms, and discernible clinical spectra, to mention a few. Baruch Spinoza Biography[edit] Family and community origins[edit] Spinoza's ancestors were of Sephardic Jewish descent, and were a part of the community of Portuguese Jews that had settled in the city of Amsterdam in the wake of the Alhambra Decree in Spain (1492) and the Portuguese Inquisition (1536), which had resulted in forced conversions and expulsions from the Iberian peninsula.[11] Attracted by the Decree of Toleration issued in 1579 by the Union of Utrecht, Portuguese "conversos" first sailed to Amsterdam in 1593 and promptly reconverted to Judaism.[12] In 1598 permission was granted to build a synagogue, and in 1615 an ordinance for the admission and government of the Jews was passed.[13] As a community of exiles, the Portuguese Jews of Amsterdam were highly proud of their identity.[13] Spinoza's father, Miguel (Michael), and his uncle, Manuel, then moved to Amsterdam where they resumed the practice of Judaism. 17th-century Holland[edit]

Industrial Revolution Iron and Coal, 1855–60, by William Bell Scott illustrates the central place of coal and iron working in the industrial revolution and the heavy engineering projects they made possible. The Industrial Revolution was the transition to new manufacturing processes in the period from about 1760 to sometime between 1820 and 1840. This transition included going from hand production methods to machines, new chemical manufacturing and iron production processes, improved efficiency of water power, the increasing use of steam power, and the development of machine tools. It also included the change from wood and other bio-fuels to coal. Textiles were the dominant industry of the Industrial Revolution in terms of employment, value of output and capital invested; the textile industry was also the first to use modern production methods.[1] The Industrial Revolution marks a major turning point in history; almost every aspect of daily life was influenced in some way.

Aldous Huxley Aldous Leonard Huxley /ˈhʌksli/ (26 July 1894 – 22 November 1963) was an English writer, philosopher and a prominent member of the Huxley family. He was best known for his novels including Brave New World, set in a dystopian London, and for non-fiction books, such as The Doors of Perception, which recalls experiences when taking a psychedelic drug, and a wide-ranging output of essays. Early in his career Huxley edited the magazine Oxford Poetry, and published short stories and poetry. Mid career and later, he published travel writing, film stories and scripts. He spent the later part of his life in the US, living in Los Angeles from 1937 until his death. In 1962, a year before his death, he was elected Companion of Literature by the Royal Society of Literature.[1]

Magick One must find out for oneself, and make sure beyond doubt, who one is, what one is, why one is ...Being thus conscious of the proper course to pursue, the next thing is to understand the conditions necessary to following it out. After that, one must eliminate from oneself every element alien or hostile to success, and develop those parts of oneself which are specially needed to control the aforesaid conditions. (Crowley, Magick, Book 4 p.134)