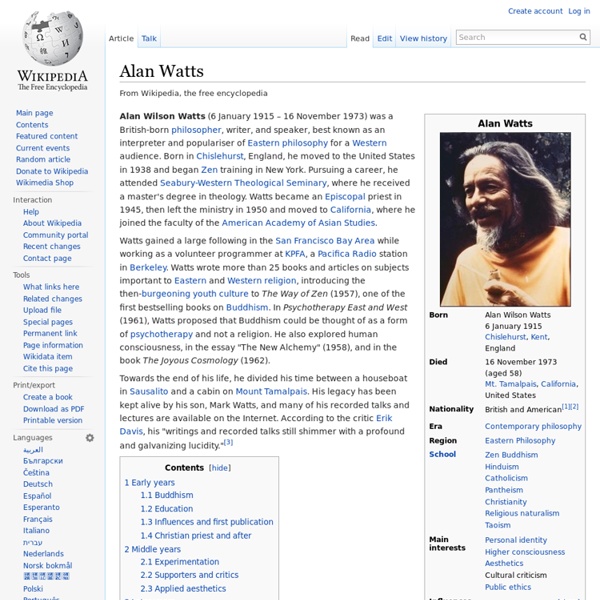 Watts gained a large following in the San Francisco Bay Area while working as a volunteer programmer at KPFA, a Pacifica Radio station in Berkeley. Watts wrote more than 25 books and articles on subjects important to Eastern and Western religion, introducing the then-burgeoning youth culture to The Way of Zen (1957), one of the first bestselling books on Buddhism. In Psychotherapy East and West (1961), Watts proposed that Buddhism could be thought of as a form of psychotherapy and not a religion. He also explored human consciousness, in the essay "The New Alchemy" (1958), and in the book The Joyous Cosmology (1962). Towards the end of his life, he divided his time between a houseboat in Sausalito and a cabin on Mount Tamalpais. His legacy has been kept alive by his son, Mark Watts, and many of his recorded talks and lectures are available on the Internet. Early years[edit] Watts also later wrote of a mystical vision he experienced while ill with a fever as a child. Buddhism[edit]

Enheduanna Regarded by literary and historical scholars as possibly the earliest known author and poet, Enheduanna served as the High Priestess during the third millennium BCE.[1] She was appointed to the role by her father, King Sargon of Akkad. Her mother was Queen Tashlultum.[7][8] Enheduanna has left behind a corpus of literary works, definitively ascribed to her, that include several personal devotions to the goddess Inanna and a collection of hymns known as the "Sumerian Temple Hymns," regarded as one of the first attempts at a systematic theology. In addition, scholars, such as Hallo and Van Dijk, suggest that certain texts not ascribed to her may also be her works.[9] Enheduanna was appointed to the role of High Priestess in what is considered to be a shrewd political move by Sargon to help cement power in the Sumerian south where the City of Ur was located.[10] She continued to hold office during the reign of Rimush, her brother.

Six degrees of separation Six degrees of separation. Early conceptions[edit] Shrinking world[edit] Theories on optimal design of cities, city traffic flows, neighborhoods and demographics were in vogue after World War I. Eratosthenes Eratosthenes of Cyrene (Ancient Greek: Ἐρατοσθένης, IPA: [eratostʰénɛːs]; English /ɛrəˈtɒsθəniːz/; c. 276 BC[1] – c. 195/194 BC[2]) was a Greek mathematician, geographer, poet, astronomer, and music theorist. He was a man of learning, becoming the chief librarian at the Library of Alexandria. He invented the discipline of geography, including the terminology used today.[3] Eratosthenes was the founder of scientific chronology; he endeavored to revise the dates of the chief literary and political events from the conquest of Troy. In number theory, he introduced the sieve of Eratosthenes, an efficient method of identifying prime numbers. He was a figure of influence who declined to specialize in only one field.

A tribute to Prince Charles, champion of anti-science, on his 65th birthday Today, Prince Charles celebrates his 65th birthday. He is one of the world’s most tenacious, outspoken and influential proponent of alternative medicine and attacker of science - sufficient reason, I think, to join the birthday-celebrations by outlining a chronology of his love affair with quackery. The following post highlights just a few events (there are so many more!)

Eavesdropping "Belly-buster" hand-crank audio drill, used during the late 1950s and early 1960s to drill holes into masonry for implanting audio devices Eavesdropping is secretly listening to the private conversation of others without their consent, as defined by Black's Law Dictionary.[1] This is commonly thought to be unethical and there is an old adage that "eavesdroppers seldom hear anything good of themselves... eavesdroppers always try to listen to matters that concern them."[2] Petrarch Santa Maria della Pieve in Arezzo Original lyrics by Petrarch, found in 1985 in Erfurt Biography[edit] Youth and early career[edit]

Pick of the week: Noam Chomsky and Michel Gondry, together at last How does one explain the fact that a leading figure in analytic philosophy and linguistic theory – abstruse academic fields that are not readily comprehensible to the layperson and have almost no practical or everyday resonance – has become America’s most prominent public intellectual and its leading anarcho-libertarian voice of dissent? Needless to say, most people who have read Noam Chomsky’s numerous works of political polemics about American imperialism, the mass media and the Middle East have not read “Language and the Study of Mind,” let alone “Morphophonemics of Modern Hebrew.” But there is a relationship between the two Chomskys, and also a person behind them, whom almost nobody knows. That impossible combination is what French filmmaker Michel Gondry sets out to capture, after his own peculiar fashion, in “Is the Man Who Is Tall Happy?: An Animated Conversation With Noam Chomsky.” Yes, it’s a cartoon.

Vajrayana Vajrayāna (Sanskrit: वज्रयान, Bengali: বজ্রযান) is also known as Tantric Buddhism, Tantrayāna, Mantrayāna, Secret Mantra, Esoteric Buddhism and the Diamond Way or Thunderbolt Way. The Lama and the Guru yoga are central in this system.[1] Vajrayāna is a complex and multifaceted system of Buddhist thought and practice which evolved over several centuries. Founded by Indian Mahāsiddhas, Vajrayāna subscribes to Buddhist tantric literature. History of Vajrayāna[edit] Although the first tantric Buddhist texts appeared in India in the 3rd century and continued to appear until the 12th century, scholars such as Hirakawa Akira assert that the Vajrayāna probably came into existence in the 6th or 7th century, while the term Vajrayāna itself first appeared in the 8th century. The Vajrayāna was preceded by the Mantrayāna, and then followed by the Sahajayāna and Kalacakrayāna.