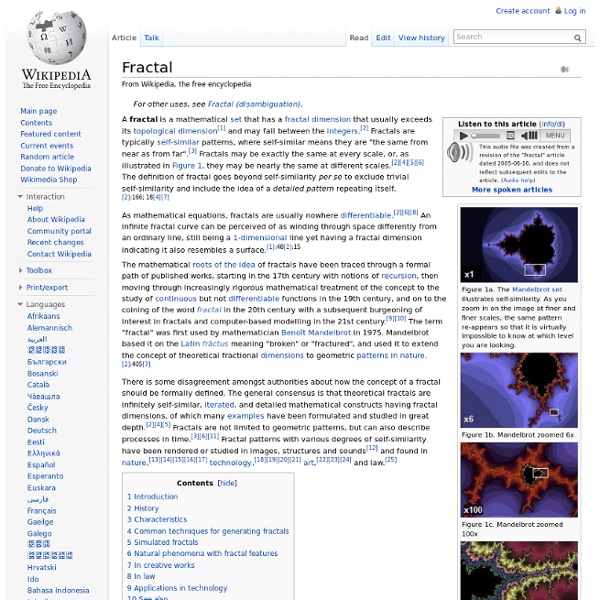 Figure 1a. The Mandelbrot set illustrates self-similarity. As the image is enlarged, the same pattern re-appears so that it is virtually impossible to determine the scale being examined. Figure 1b. Figure 1c. Figure 1d. Fractals are distinguished from regular geometric figures by their fractal dimensional scaling. As mathematical equations, fractals are usually nowhere differentiable.[2][5][8] An infinite fractal curve can be conceived of as winding through space differently from an ordinary line, still being a 1-dimensional line yet having a fractal dimension indicating it also resembles a surface.[7]:48[2]:15 There is some disagreement amongst authorities about how the concept of a fractal should be formally defined. Introduction[edit] The word "fractal" often has different connotations for laypeople than mathematicians, where the layperson is more likely to be familiar with fractal art than a mathematical conception. History[edit] Figure 2. Figure 3. uniform mass center triangle fractal

Percolation threshold Percolation threshold is a mathematical term related to percolation theory , which is the formation of long-range connectivity in random systems. Below the threshold a giant connected component does not exist; while above it, there exists a giant component of the order of system size. In engineering and coffee making , percolation represents the flow of fluids through porous media, but in the mathematics and physics worlds it generally refers to simplified lattice models of random systems or networks (graphs), and the nature of the connectivity in them. The percolation threshold is the critical value of the occupation probability p , or more generally a critical surface for a group of parameters p 1 , p 2 , ..., such that infinite connectivity ( percolation ) first occurs. [ edit ] Percolation models In the systems described so far, it has been assumed that the occupation of a site or bond is completely random—this is the so-called Bernoulli percolation. [ edit ] 2-Uniform Lattices or . .

Fractals in Nature Naturally Occurring Fractals (including plants, rivers, galaxies, clouds, weather, population patterns, stocks, video feedback, crystal growth, etc.) The geometry of Fractals brings us a new appreciation for the natural world and the patterns we observe in it. Many things previously called chaos are now known to follow subtle subtle fractal laws of behavior. So many things turned out to be fractal that the word "chaos" itself (in operational science) had redefined, or actually for the FIRST time Formally Defined as following inherently unpredictable yet generally deterministic rules based on nonlinear iterative equations. Fractals are unpredictable in specific details yet deterministic when viewed as a total pattern - in many ways this reflects what we observe in the small details & total pattern of life in all it's physical and mental varieties, too .... After a few dozen repetitions or ITERATIONS the shape we would recognize as a Perfect Fern appears from the abstract world of math.

Fantastic Fractals Complexity Complexity is generally used to characterize something with many parts where those parts interact with each other in multiple ways. The study of these complex linkages is the main goal of complex systems theory. In science,[1] there are at this time a number of approaches to characterizing complexity, many of which are reflected in this article. Neil Johnson admits that "even among scientists, there is no unique definition of complexity - and the scientific notion has traditionally been conveyed using particular examples..." Overview[edit] Definitions of complexity often depend on the concept of a "system"—a set of parts or elements that have relationships among them differentiated from relationships with other elements outside the relational regime. Some definitions relate to the algorithmic basis for the expression of a complex phenomenon or model or mathematical expression, as later set out herein. Disorganized complexity vs. organized complexity[edit] Study of complexity[edit]

Agent-based model An agent-based model (ABM) is one of a class of computational models for simulating the actions and interactions of autonomous agents (both individual or collective entities such as organizations or groups) with a view to assessing their effects on the system as a whole. It combines elements of game theory, complex systems, emergence, computational sociology, multi-agent systems, and evolutionary programming. Monte Carlo Methods are used to introduce randomness. Particularly within ecology, ABMs are also called individual-based models (IBMs),[1] and individuals within IBMs may be simpler than fully autonomous agents within ABMs. Agent-based models are a kind of microscale model [3] that simulate the simultaneous operations and interactions of multiple agents in an attempt to re-create and predict the appearance of complex phenomena. History[edit] The idea of agent-based modeling was developed as a relatively simple concept in the late 1940s. Early developments[edit] 2000s and later[edit]

Fractal Wisdom - Fractal Wisdom Software 3D graphics - index Cellular automaton The concept was originally discovered in the 1940s by Stanislaw Ulam and John von Neumann while they were contemporaries at Los Alamos National Laboratory. While studied by some throughout the 1950s and 1960s, it was not until the 1970s and Conway's Game of Life, a two-dimensional cellular automaton, that interest in the subject expanded beyond academia. In the 1980s, Stephen Wolfram engaged in a systematic study of one-dimensional cellular automata, or what he calls elementary cellular automata; his research assistant Matthew Cook showed that one of these rules is Turing-complete. Wolfram published A New Kind of Science in 2002, claiming that cellular automata have applications in many fields of science. These include computer processors and cryptography. The primary classifications of cellular automata as outlined by Wolfram are numbered one to four. Overview[edit] A torus, a toroidal shape Cellular automata are often simulated on a finite grid rather than an infinite one. History[edit]

A Simple Fractal Model of the Conscious Universe Here's the definition of fractals from Wikipedia: “A fractal is 'a rough or fragmented geometric shape that can be split into parts, each of which is (at least approximately) a reduced-size copy of the whole,' a property called self-similarity... Because they appear similar at all levels of magnification, fractals are often considered to be infinitely complex (in informal terms). Natural objects that are approximated by fractals to a degree include clouds, mountain ranges, lightning bolts, coastlines, snow flakes, various vegetables (cauliflower and broccoli), and animal coloration patterns.” If you would like to see fractals in action, the NOVA documentary, “Fractals,: Hunting the Hidden Dimension," gives an excellent overview of fractals. • It has a fine structure at arbitrarily small scales. • It is too irregular to be easily described in traditional Euclidean geometric language. • It is self-similar (at least approximately or stochastically). • It has a simple and recursive definition.

are you a fractaloid, or a euclinaut? euclidean bound guesses verses, the infinite iris of the fractal by hyperevolution Jul 21