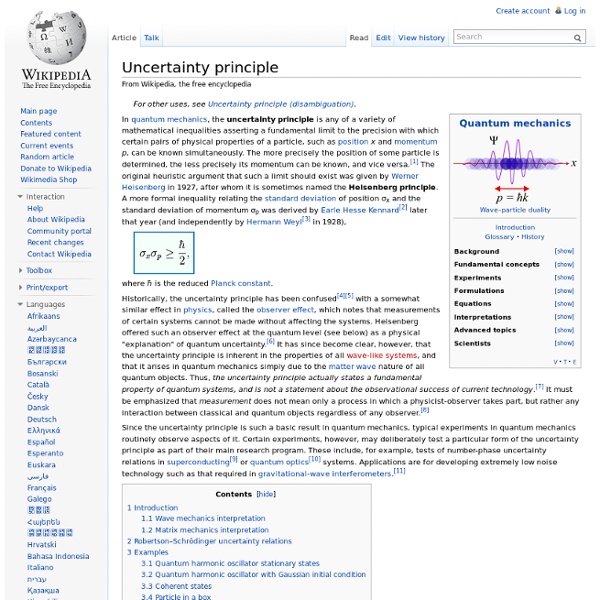 where ħ is the reduced Planck constant. The original heuristic argument that such a limit should exist was given by Heisenberg, after whom it is sometimes named the Heisenberg principle. This ascribes the uncertainty in the measurable quantities to the jolt-like disturbance triggered by the act of observation. Though widely repeated in textbooks, this physical argument is now known to be fundamentally misleading.[4][5] While the act of measurement does lead to uncertainty, the loss of precision is less than that predicted by Heisenberg's argument; the formal mathematical result remains valid, however. Since the uncertainty principle is such a basic result in quantum mechanics, typical experiments in quantum mechanics routinely observe aspects of it. Introduction[edit] Click to see animation. The superposition of several plane waves to form a wave packet. As a principle, Heisenberg's uncertainty relationship must be something that is in accord with all experience. . with yields where Related:  wjanssens

The Infinity of Quantum Physics Quantum Mechanics the Infinity Photon Electron Couplings creating sets of infinities of Fractal Self-Similarities Atom surround by Photon Electron Coupling. Expanding as a Wave-Particle Function of future possibilities. Wave-Particle Function collapsing into sets of Fractal Self-Similarities expanding as set of infinities creating there own Spacetime. Infinity can always be divided up into ever increasing sets of infinities because of the continuous expansion at the quantum level.

Heisenberg picture It stands in contrast to the Schrödinger picture in which the operators are constant, instead, and the states evolve in time. The two pictures only differ by a basis change with respect to time-dependency, which corresponds to the difference between active and passive transformations. The Heisenberg picture is the formulation of matrix mechanics in an arbitrary basis, in which the Hamiltonian is not necessarily diagonal. It further serves to define a third, hybrid, picture, the Interaction picture. Mathematical details[edit] In the Heisenberg picture of quantum mechanics the state vectors, |ψ⟩, do not change with time, while observables A satisfy This approach also has a more direct similarity to classical physics: by simply replacing the commutator above by the Poisson bracket, the Heisenberg equation reduces to an equation in Hamiltonian mechanics. Derivation of Heisenberg's equation[edit] where H is the Hamiltonian and ħ is the reduced Planck constant. It now follows that Thus which implies

8 shocking things we learned from Stephen Hawking's book From the idea that our universe is one among many, to the revelation that mathematician Pythagoras didn't actually invent the Pythagorean theorem, here are eight shocking things we learned from reading physicist Stephen Hawking's new book, "The Grand Design," written with fellow physicist Leonard Mlodinow of Caltech. The book, covering major questions about the nature and origin of the universe, was released Sept. 7 by its publisher, Bantam. 1. For example, if all we know is that a particle traveled from point A to point B, then it is not true that the particle took a definite path and we just don't know what it is. Yeah, we're still trying to wrap our brains around this. The authors sum up: "No matter how thorough our observation of the present, the (unobserved) past, like the future, is indefinite and exists only as a spectrum of possibilities." 2. This fun fact: A 1-watt night-light emits a billion billion photons each second. Photons are the little packets that light comes in. 3. 4. 5.

Physicists challenge classical world with quantum-mechanical implementation of 'shell game' Inspired by the popular confidence trick known as "shell game," researchers at UC Santa Barbara have demonstrated the ability to hide and shuffle "quantum-mechanical peas" -- microwave single photons -- under and between three microwave resonators, or "quantized shells." In a paper published in the Jan. 30 issue of the journal Nature Physics, UCSB researchers show the first demonstration of the coherent control of a multi-resonator architecture. This topic has been a holy grail among physicists studying photons at the quantum-mechanical level for more than a decade. The UCSB researchers are Matteo Mariantoni, postdoctoral fellow in the Department of Physics; Haohua Wang, postdoctoral fellow in physics; John Martinis, professor of physics; and Andrew Cleland, professor of physics. According to the paper, the "shell man," the researcher, makes use of two superconducting quantum bits (qubits) to move the photons -- particles of light -- between the resonators.

Schrödinger picture In physics, the Schrödinger picture (also called the Schrödinger representation[1]) is a formulation of quantum mechanics in which the state vectors evolve in time, but the operators (observables and others) are constant with respect to time.[2][3] This differs from the Heisenberg picture which keeps the states constant while the observables evolve in time, and from the interaction picture in which both the states and the observables evolve in time. The Schrödinger and Heisenberg pictures are related as active and passive transformations and have the same measurement statistics. In the Schrödinger picture, the state of a system evolves with time. The evolution for a closed quantum system is brought about by a unitary operator, the time evolution operator. For time evolution from a state vector at time to a state vector , the time-evolution operator is commonly written , and one has where the exponent is evaluated via its Taylor series. Background[edit] and returns some other ket , or both.

SCHOPENHAUER'S 38 STRATAGEMS, OR 38 WAYS TO WIN AN ARGUMENT Arthur Schopenhauer (1788-1860), was a brilliant German philosopher. These 38 Stratagems are excerpts from "The Art of Controversy", first translated into English and published in 1896. Carry your opponent's proposition beyond its natural limits; exaggerate it. The more general your opponent's statement becomes, the more objections you can find against it. The more restricted and narrow his or her propositions remain, the easier they are to defend by him or her. (abstracted from the book:Numerical Lists You Never Knew or Once Knew and Probably Forget, by: John Boswell and Dan Starer) Path integral formulation The path integral also relates quantum and stochastic processes, and this provided the basis for the grand synthesis of the 1970s which unified quantum field theory with the statistical field theory of a fluctuating field near a second-order phase transition. The Schrödinger equation is a diffusion equation with an imaginary diffusion constant, and the path integral is an analytic continuation of a method for summing up all possible random walks. For this reason path integrals were used in the study of Brownian motion and diffusion a while before they were introduced in quantum mechanics.[3] These are just three of the paths that contribute to the quantum amplitude for a particle moving from point A at some time t0 to point B at some other time t1. Quantum action principle[edit] But the Hamiltonian in classical mechanics is derived from a Lagrangian, which is a more fundamental quantity considering special relativity. and where and the partial derivative now is with respect to p at fixed q.

Will you perceive the event that kills you? David Eagleman is guest blogging this week. When light strikes your eyes, it takes some hundreds of milliseconds before you become conscious of the event. As a consequence, you are always living in the past. This strange fact of our existence is well known is neuroscience, but there’s an interesting, underappreciated consequence: you may not ever become aware of the thing that kills you. Cormac McCarthy addresses this point in his post-apocalyptic novel The Road, in a scene in which the main character has his pistol leveled on a miscreant. The protagonist replies, “Yes they will. “How do you figure that?” “Because the bullet travels faster than sound. One way to appreciate the slowness of your perception is to compare it to the speed of mechanical devices. 15 ms - Roof begins to absorb part of the impact. The last line is the zinger. David Eagleman is a neuroscientist and a writer.

Phase space formulation The theory was fully detailed by Hip Groenewold in 1946 in his PhD thesis,[1] with significant parallel contributions by Joe Moyal,[2] each building off earlier ideas by Hermann Weyl[3] and Eugene Wigner.[4] The chief advantage of the phase space formulation is that it makes quantum mechanics appear as similar to Hamiltonian mechanics as possible by avoiding the operator formalism, thereby "'freeing' the quantization of the 'burden' of the Hilbert space. The conceptual ideas underlying the development of quantum mechanics in phase space have branched into mathematical offshoots such as deformation theory (cf. Phase space distribution[edit] The phase space distribution f(x,p) of a quantum state is a quasiprobability distribution. The phase space distribution possesses properties akin to the probability density in a 2n-dimensional phase space. If Â(x,p) is an operator representing an observable, it may be mapped to phase space as A(x, p) through the Wigner transform. Star product[edit] or

Nanotube yarn makes self-cleaning clothes that are also batteries By turning powders into fibers using carbon nanotube webs, researchers at the University of Texas have managed to make yarn that can clean itself and work as a battery. It also happens to be a superconductor, but most importantly, it's machine-washable. You may not think about it, but a lot of the cool technologies that we depend on every day rely on powders to work. Lithium ion batteries, for example, use a fine powder with a huge surface area as an electrode to store energy. One way to get around this problem is to use nanotubes, those magical carbon structures that are capable of just about anything. The upshot of this technique is that you can make yourself a piece of fabric that is, for all intents and purposes, one giant battery. Technology Review, via Inhabitat