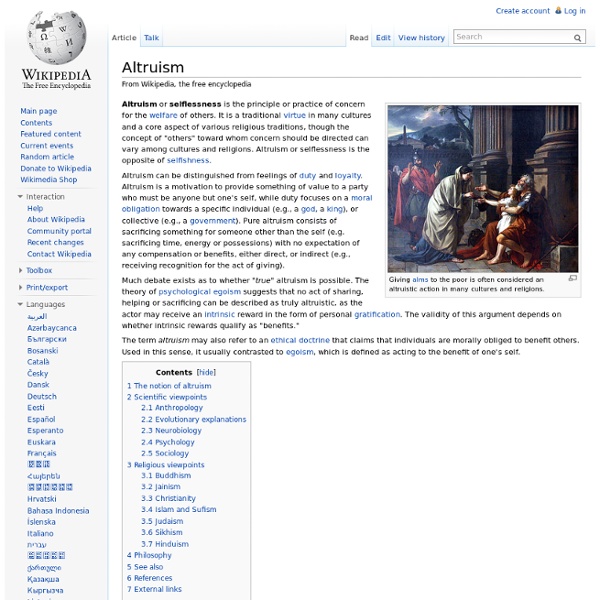 Giving alms to the poor is often considered an altruistic action. Altruism or selflessness is the principle or practice of concern for the welfare of others. It is a traditional virtue in many cultures and a core aspect of various religious traditions and secular worldviews, though the concept of "others" toward whom concern should be directed can vary among cultures and religions. Altruism or selflessness is the opposite of selfishness. Altruism can be distinguished from feelings of loyalty. Much debate exists as to whether "true" altruism is possible. The notion of altruism[edit] The concept has a long history in philosophical and ethical thought. Individual variations[edit] A certain individual may behave altruistically in one case and egoistically in another situation. A 1986 study estimated that altruism was half-inherited. Scientific viewpoints[edit] Anthropology[edit] Marcel Mauss's book The Gift contains a passage: "Note on alms." Evolutionary explanations[edit] Group selection. Related:  Philosophy/ Psychology

Compassion Compassion personified: a statue at the Epcot center in Florida Compassion is the response to the suffering of others that motivates a desire to help.[1][2] Compassion is often, though not inevitably, the key component in what manifests in the social context as altruism.[citation needed] In ethical terms, the expressions down the ages of the so-called Golden Rule often embodies by implication the principle of compassion: Do to others what you would have them do to you.[3][original research?] The English noun compassion, meaning to love together with, comes from Latin. Its prefix com- comes directly from com, an archaic version of the Latin preposition and affix cum (= with); the -passion segment is derived from passus, past participle of the deponent verb patior, patī, passus sum. Theories[edit] Three theoretical perspectives of compassion have been proposed, which are contrasted by their predictions and approaches of compassion. Psychology[edit] Neuropsychology[edit] Medicine[edit]

Epicurus Ancient Greek philosopher For Epicurus, the purpose of philosophy was to help people attain a happy, tranquil life characterized by ataraxia (peace and freedom from fear) and aponia (the absence of pain). He advocated that people were best able to pursue philosophy by living a self-sufficient life surrounded by friends. Like Aristotle, Epicurus was an empiricist, meaning he believed that the senses are the only reliable source of knowledge about the world. Though popular, Epicurean teachings were controversial from the beginning. Life[edit] Upbringing and influences[edit] Map of Greece showing locations associated with Epicurus Allocation of key positions and satrapies following the Partition of Babylon in 323 BC after the death of Alexander the Great. Teaching career[edit] Marble sculpture depicting Epicurus enthroned During Epicurus's lifetime, Platonism was the dominant philosophy in higher education. Death[edit] Teachings[edit] Epistemology[edit] Ethics[edit] Don't fear god Physics[edit] Texts

Primary - Postponement of affect Negative postponement: repression[edit] Grief[edit] In the affect of grief, postponement seems to be an essential component. What happens in mourning is nothing other than a gradual "working-through" of an affect which, if released in its full strength, would overwhelm the ego'.[2] John Bowlby considered the first of the "four phases of mourning" to be a 'Phase of numbness that...may be interrupted by outbursts of extremely intense distress and/or anger'.[3] Thus one can speak of 'a rather typical postponement of grief':[4] '"I feel hurt about something and then automatically this kind of shields things up and then I feel like I can't really touch or feel anything very much"...postponement...[of] the weepiness'.[5] Conversely, Eric Lindemann, describing 'the symptomatology and management of acute grief following the Coconut Grove night-club fire...showed that people who do not "break down" and express feelings appropriate to a bereavement may suffer from delayed or distorted grief'.[6]

Kindness Kindness is a virtue in many cultures and religions. The above picture is from a Laotian temple, depicting the parable of Buddha and the elephant Nalagiri. Devadutta, jealous of Buddha and wanting to hurt him, sends an angry elephant named Nalagiri into a street where Buddha and his colleagues were walking. As the angry Nalagiri approached them, Buddha's loving kindness and friendliness tames Nalagiri. Other[edit] In 2009, analysts warned that 'real kindness changes people in the doing of it, often in unpredictable ways. They also argue that, in a relationship, 'real kindness, real fellow-feeling, entails hating and being hated - that is, really feeling available frustrations – and through this coming to a more real relationship'.[8] In literature[edit] "Kindness is 'Pure Love' expressed / experienced / realized ~ 'Human Kindness' defines the fate of Humankind." See also[edit] References[edit] Jump up ^ Harvey, Peter (2007). Further reading[edit] RABBI-UL-AWWAL (July 1998).

On Truth & Reality: Philosophy Physics Metaphysics of Space, Wave Structure of Matter. Famous Science Art Quotes. Primary - Displacement (psychology) In Freudian psychology, displacement (German Verschiebung "shift, move") is an unconscious defense mechanism whereby the mind substitutes either a new aim or a new object for goals felt in their original form to be dangerous or unacceptable.[1] A term originating with Sigmund Freud,[2] displacement operates in the mind unconsciously, its transference of emotions, ideas, or wishes being most often used to allay anxiety in the face of aggressive or sexual impulses. Freud initially saw displacement as a means of dream-distortion, involving a shift of emphasis from important to unimportant elements,[3] or the replacement of something by a mere allusion.[4] As he himself put it, “in the case of Verschiebung, 'displacement', the German term is closer to the idea of that veering off of signification that we see in metonymy, and which from its first appearance in Freud is represented as the most appropriate means used by the unconscious to foil censorship”.[11] Arthur J.

Patience Patience (or forbearing) is the state of endurance under difficult circumstances, which can mean persevering in the face of delay or provocation without acting on annoyance/anger in a negative way; or exhibiting forbearance when under strain, especially when faced with longer-term difficulties. Patience is the level of endurance one can take before negativity. It is also used to refer to the character trait of being steadfast. Antonyms include hastiness and impetuousness. Scientific perspectives[edit] In evolutionary psychology and in cognitive neuroscience, patience is studied as a decision-making problem, involving the choice of either a small reward in the short term, or a more valuable reward in the long term. Religious perspectives[edit] Three virtues by Jan Saenredam after Hendrik Goltzius. Judaism[edit] Patience and fortitude are prominent themes in Judaism. Christianity[edit] In the Christian religion, patience is one of the most valuable virtues of life. Islam[edit] Buddhism[edit]

Positivism Positivism is the philosophy of science that information derived from logical and mathematical treatments and reports of sensory experience is the exclusive source of all authoritative knowledge,[1] and that there is valid knowledge (truth) only in this derived knowledge.[2] Verified data received from the senses are known as empirical evidence.[1] Positivism holds that society, like the physical world, operates according to general laws. Introspective and intuitive knowledge is rejected, as is metaphysics and theology. Although the positivist approach has been a recurrent theme in the history of western thought,[3] the modern sense of the approach was developed by the philosopher Auguste Comte in the early 19th century.[4] Comte argued that, much as the physical world operates according to gravity and other absolute laws, so does society.[5] Etymology[edit] Overview[edit] Antecedents[edit] Auguste Comte[edit] Antipositivism[edit] Main article: antipositivism In historiography[edit]

Primary - Humour Humour or humor (see spelling differences) is the tendency of particular cognitive experiences to provoke laughter and provide amusement. The term derives from the humoral medicine of the ancient Greeks, which taught that the balance of fluids in the human body, known as humours (Latin: humor, "body fluid"), controlled human health and emotion. §Theories[edit] An April fool in Denmark, regarding Copenhagen's new subway. Some claim that humour cannot or should not be explained. Postcard from France, early 20th century. Funny faces made with shells, painting made by Jan van Kessel the Elder (1626–1679) Many theories exist about what humour is and what social function it serves. The benign-violation theory, endorsed by Peter McGraw, attempts to explain humours' existence. Others believe that 'the appropriate use of humor can facilitate social interactions"[3] §Views[edit] Some claim that humour cannot or should not be explained. §Sociological factors[edit] §Ancient Greece[edit] §India[edit]

Portrait of an INFP As an INFP, your primary mode of living is focused internally, where you deal with things according to how you feel about them, or how they fit into your personal value system. Your secondary mode is external, where you take things in primarily via your intuition. INFPs, more than other iNtuitive Feeling types, are focused on making the world a better place for people. Their primary goal is to find out their meaning in life. What is their purpose? INFPs are highly intuitive about people. Generally thoughtful and considerate, INFPs are good listeners and put people at ease. INFPs do not like conflict, and go to great lengths to avoid it. INFPs are flexible and laid-back, until one of their values is violated. When it comes to the mundane details of life maintenance, INFPs are typically completely unaware of such things. INFPs do not like to deal with hard facts and logic. INFPs have very high standards and are perfectionists. INFPs are usually talented writers. Check us out on Facebook

Pantheism Pantheism is the belief that the universe (or nature as the totality of everything) is identical with divinity,[1] or that everything composes an all-encompassing, immanent God.[2] Pantheists thus do not believe in a distinct personal or anthropomorphic god.[3] Some Eastern religions are considered to be pantheistically inclined. Definitions[edit] Pantheism is derived from the Greek roots pan (meaning "all") and theos (meaning "God"). There are a variety of definitions of pantheism. Some consider it a theological and philosophical position concerning God.[4]:p.8 As a religious position, some describe pantheism as the polar opposite of atheism.[5] From this standpoint, pantheism is the view that everything is part of an all-encompassing, immanent God.[2] All forms of reality may then be considered either modes of that Being, or identical with it.[7] Others hold that pantheism is a non-religious philosophical position. History[edit] Recent developments[edit] "Mr. Categorizations[edit]

Jaron Lanier Jaron Lanier is a computer scientist, composer, and visual artist. He is the author of You Are Not A Gadget: A Manifesto; and Who Owns The Future? His scientific interests include biomimetic information architectures, user interfaces, heterogeneous scientific simulations, advanced information systems for medicine, and computational approaches to the fundamentals of physics. He collaborates with a wide range of scientists in fields related to these interests. Lanier's name is also often associated with Virtual Reality research. From 1997 to 2001, Lanier was the Chief Scientist of Advanced Network and Services, which contained the Engineering Office of Internet2, and served as the Lead Scientist of the National Tele-immersion Initiative, a coalition of research universities studying advanced applications for Internet2.