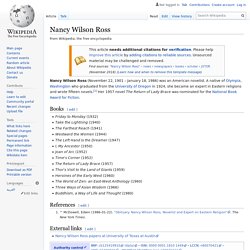 A native of Olympia, Washington who graduated from the University of Oregon in 1924, she became an expert in Eastern religions and wrote fifteen novels.[1] Her 1957 novel The Return of Lady Brace was nominated for the National Book Award for Fiction. Books[edit] Kleist. One evening in the winter of 1801 I met an old friend in a public park. 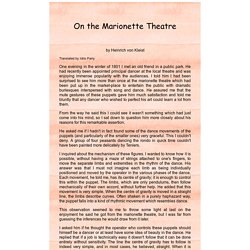 He had recently been appointed principal dancer at the local theatre and was enjoying immense popularity with the audiences. I told him I had been surprised to see him more than once at the marionette theatre which had been put up in the market-place to entertain the public with dramatic burlesques interspersed with song and dance. He assured me that the mute gestures of these puppets gave him much satisfaction and told me bluntly that any dancer who wished to perfect his art could learn a lot from them. From the way he said this I could see it wasn't something which had just come into his mind, so I sat down to question him more closely about his reasons for this remarkable assertion. En.m.wikipedia. Paul Ludwig Ewald von Kleist (8 August 1881 – 13 November 1954) was a German field marshal during World War II. 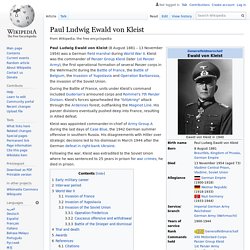 Kleist was the commander of Panzer Group Kleist (later 1st Panzer Army), the first operational formation of several Panzer corps in the Wehrmacht during the Battle of France, the Battle of Belgium, the Invasion of Yugoslavia and Operation Barbarossa, the invasion of the Soviet Union. Kleist was appointed commander-in-chief of Army Group A during the last days of Case Blue, the 1942 German summer offensive in southern Russia. His disagreements with Hitler over strategic decisions led to his dismissal in March 1944 after the German defeat in right-bank Ukraine.

Following the war, Kleist was extradited to the Soviet Union where he was sentenced to 25 years in prison for war crimes; he died in prison. Early military career[edit] At the age of 18, Kleist joined the Prussian field artillery regiment, "General Feldzeugmeister" No. 3 on 9 March 1900 as a fahnenjunker. World War II[edit]

Aviso de redirección. En.m.wikipedia. Zen in the Art of Archery (Zen in der Kunst des Bogenschießens) is a book by German philosophy professor Eugen Herrigel, published in 1948, about his experiences studying Kyūdō, a form of Japanese archery, when he lived in Japan in the 1920s. 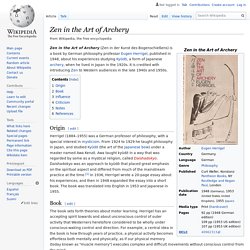 It is credited with introducing Zen to Western audiences in the late 1940s and 1950s. Origin[edit] Herrigel (1884–1955) was a German professor of philosophy, with a special interest in mysticism. From 1924 to 1929 he taught philosophy in Japan, and studied Kyūdō (the art of the Japanese bow) under a master named Awa Kenzô. Awa taught kyūdō in a way that was regarded by some as a mystical religion, called Daishadokyo. Book[edit] Huineng. His Holiness Hui Neng, who became the great Sixth Patriarch of Ch'an (Japanese Zen) was a poor illiterate peasant boy from Hsin Chou of Kwangtung. 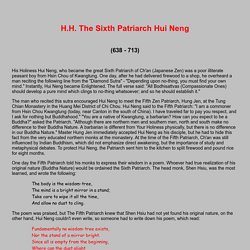 One day, after he had delivered firewood to a shop, he overheard a man reciting the following line from the "Diamond Sutra" - "Depending upon no-thing, you must find your own mind. " Instantly, Hui Neng became Enlightened. The full verse said: "All Bodhisattvas (Compassionate Ones) should develop a pure mind which clings to no-thing whatsoever; and so he should establish it. " The man who recited this sutra encouraged Hui Neng to meet the Fifth Zen Patriarch, Hung Jen, at the Tung Chian Monastery in the Huang Mei District of Chi Chou. Hui Neng said to the Fifth Patriarch: "I am a commoner from Hsin Chou Kwangtung (today, near Canton in the south of China).

The body is the wisdom-tree,The mind is a bright mirror in a stand;Take care to wipe it all the time,And allow no dust to cling. M.youtube. Www.britannica. Hui-neng, Pinyin Huineng, (born 638, southwest Kwangtung, China—died 713, Kwangtung), the sixth great patriarch of Zen (Ch’an in Chinese) Buddhism and founder of the Southern school, which became the dominant school of Zen, both in China and in Japan. 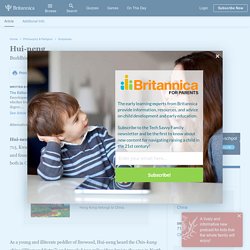 Britannica Quiz Exploring China: Fact or Fiction? Hong Kong belongs to China. As a young and illiterate peddler of firewood, Hui-neng heard the Chin-kang ching (“Diamond Sutra”) and traveled 500 miles (800 km) to the area in North China where the fifth Ch’an patriarch, Hung-jen (601–674), was expounding this text. According to legend, in a dramatic poetry contest in 661 the senior monk, Shen-hsiu (605? Hui-neng returned to South China, reaching Canton in 676. In pronouncing this radical doctrine of sudden enlightenment, Hui-neng rejected all traditional Buddhist concepts, works, and practices and created a wide schism between his Southern school and the Northern school led by Shen-hsiu, who had advocated gradual enlightenment. En.m.wikipedia. Semi-legendary Chinese Chan-master Dajian Huineng (traditional Chinese: 大鑒惠能; pinyin: Dàjiàn Huìnéng; Wade–Giles: Ta4-chien4; Japanese: Daikan Enō; Korean: Hyeneung; 638–713), also commonly known as the Sixth Patriarch or Sixth Ancestor of Chan (traditional Chinese: 禪宗六祖), is a semi-legendary but central figure in the early history of Chinese Chan Buddhism. 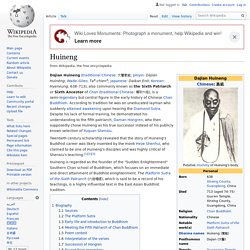 According to tradition he was an uneducated layman who suddenly attained awakening upon hearing the Diamond Sutra. Despite his lack of formal training, he demonstrated his understanding to the fifth patriarch, Daman Hongren, who then supposedly chose Huineng as his true successor instead of his publicly known selection of Yuquan Shenxiu. Twentieth century scholarship revealed that the story of Huineng's Buddhist career was likely invented by the monk Heze Shenhui, who claimed to be one of Huineng's disciples and was highly critical of Shenxiu's teaching. Biography[edit] Sources[edit] En.m.wikipedia. The Platform Sutra: The Zen Teaching of Hui-Neng - Google Books. Www.hpb. Platform-sutra. En.m.wikipedia. Popular Sutra in Mahāyāna Buddhism The Platform Sutra of the Sixth Patriarch (Chinese: 六祖壇經; pinyin: Liùzǔ Tánjīng or simply: 壇經 Tánjīng) is a Chan Buddhist scripture that was composed in China during the 8th to 13th century. 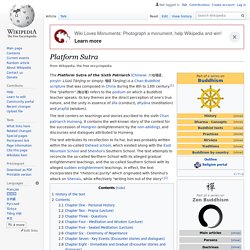 The "platform" (施法壇) refers to the podium on which a Buddhist teacher speaks. Its key themes are the direct perception of one's true nature, and the unity in essence of śīla (conduct), dhyāna (meditation) and prajñā (wisdom). The text attributes its recollection to Fa-hai, but was probably written within the so-called Oxhead school, which existed along with the East Mountain School and Shenhui's Southern School. The text attempts to reconcile the so-called Northern School with its alleged gradual enlightenment teachings, and the so-called Southern School with its alleged sudden enlightenment teachings. 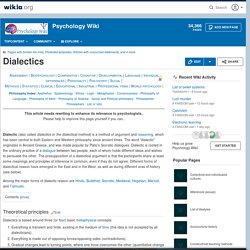 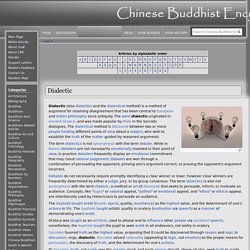 The word dialectic originated in ancient Greece, and was made popular by Plato in the Socratic dialogues. The dialectical method is discourse between two or more people holding different points of view about a subject, who wish to establish the truth of the matter guided by reasoned arguments. The term dialectics is not synonymous with the term debate. While in theory debaters are not necessarily emotionally invested in their point of view, in practice debaters frequently display an emotional commitment that may cloud rational judgement.

Debates are won through a combination of persuading the opponent; proving one's argument correct; or proving the opponent's argument incorrect. The Sophists taught aretē (Greek: ἀρετή, quality, excellence) as the highest value, and the determinant of one's actions in life. Www.britannica. Nalanda, ancient university and Buddhist monastic centre southwest of Bihar Sharif in central Bihar state, northeastern India. Nalanda’s traditional history dates to the time of the Buddha (6th–5th centuries bce) and Mahavira, the founder of the Jaina religion. According to a later Tibetan source, Nagarjuna (the 2nd–3rd-century ce Buddhist philosopher) began his studies there. Extensive excavations carried out by the Archaeological Survey of India indicate, however, that the foundation of the monasteries belongs to the Gupta period (5th century ce).

The powerful 7th-century ruler of Kanauj (Kannauj), Harshavardhana, is reported to have contributed to them. Nalandauniversity.wordpress. Nālandā (Hindi/Sanskrit/Pali: नालंदा) is the name of an ancient center of higher learning inBihar, India. The site of Nalanda is located in the Indian state of Bihar, about 55 miles south east of Patna, and was a Buddhist center of learning from 427 to 1197 CE. It has been called “one of the first great universities in recorded history. Some buildings were constructed by the Mauryan emperor Ashoka the Great (i.e.

Raja Asoka: 273–232 BCE) which is an indication of an early establishment of the Buddhist learning center Nalanda. TheGupta Empire also patronized some monasteries. En.m.wikipedia. Nalanda University (also known as Nalanda International University) is an international and research-intensive university located in the historical city of Rajgir, in Bihar, India. It was established by an Act of Parliament to emulate the famous ancient university of Nalanda, which functioned between the 5th and 13th centuries. The idea to resurrect Nalanda University was endorsed in 2007 at the East Asia Summit, represented mostly by Asian countries including China, Singapore, Japan, Malaysia and Vietnam, apart from Australia and New Zealand, and as such, the university is seen as one of the flagship projects of the Government of India. It has been designated as an "International Institution of National Importance" by the Parliament, and began its first academic session on 1 September 2014.

Initially set up with temporary facilities in Rajgir, a modern campus spanning over 160 hectares (400 acres) is expected to be finished by 2020. En.m.wikipedia. Ancient Buddhist monastery in India Nalanda (ISO: Nālandā, pronounced [naːlən̪d̪aː]) was an ancient Mahavihara, a revered Buddhist monastery which also served as a renowned centre of learning, in the ancient kingdom of Magadha (modern-day Bihar) in India.[4] The university of Nalanda obtained significant fame, prestige and relevance during ancient times, and rose to legendary status due to its contribution to the emergence of India as a great power around the fourth century.[5] The site is located about 95 kilometres (59 mi) southeast of Patna near the city of Bihar Sharif, and was one of the greatest centres of learning in the world from the fifth century CE to c. 1200 CE. Today, it is a UNESCO World Heritage Site.[7][8] Www.britannica. En.m.wikipedia. Samrat or Emperor Bhúmanyu in Mahabharata[edit] References[edit]

Mahayana. Mahāyāna (Sanskrit: महायान mahāyāna, literally the "Great Vehicle") is one of two (or three, under some classifications) main existing branches of Buddhism and a term for classification of Buddhist philosophies and practice. En.m.wikipedia. Indian philosopher Nāgārjuna (c. 150 – c. 250 CE), (Tibetan: mGon-po kLu-grub) is widely considered one of the most important Buddhist philosophers.[2] Along with his disciple Āryadeva, he is considered the founder of the Madhyamaka school of Mahāyāna Buddhism.[2] Nāgārjuna is also credited with developing the philosophy of the Prajñāpāramitā sūtras and, by some sources, with having revealed these scriptures to the world after recovering them from the nāgas.

He is traditionally thought to have written many treatises on rasayana, as well as serving a term as the head of Nālandā.[3] En.m.wikipedia. Www.merriam-webster. En.m.wikipedia. Nihilism is also a characteristic that has been ascribed to time periods: for example, Jean Baudrillard and others have called postmodernity a nihilistic epoch,[4] and some Christian theologians and figures of religious authority have asserted that postmodernity[5] and many aspects of modernity[3] represent a rejection of theism, and that such rejection of their theistic doctrine entails nihilism. Forms of nihilism[edit] Nihilism has many definitions, and thus can describe philosophical positions that are arguably independent. [edit] Metaphysical nihilism is the philosophical theory that there might be no objects at all—that is, that there is a possible world where there are no objects at all—or at least that there might be no concrete objects at all—so that even if every possible world contains some objects, there is at least one that contains only abstract objects.