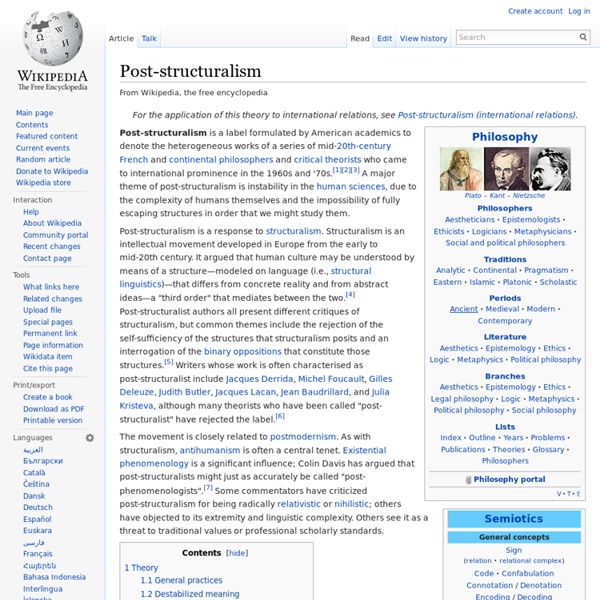 Post-structuralism is a label formulated by American academics to denote the heterogeneous works of a series of mid-20th-century French and continental philosophers and critical theorists who came to international prominence in the 1960s and '70s.[1][2][3] A major theme of post-structuralism is instability in the human sciences, due to the complexity of humans themselves and the impossibility of fully escaping structures in order that we might study them. Post-structuralism is a response to structuralism. Structuralism is an intellectual movement developed in Europe from the early to mid-20th century. Theory[edit] General practices[edit] The author's intended meaning is secondary to the meaning that the reader perceives. Destabilized meaning[edit] In the post-structuralist approach to textual analysis, the reader replaces the author as the primary subject of inquiry. In his essay "Signification and Sense," Emmanuel Levinas remarked on this new field of semantic inquiry: Deconstruction[edit]

Advanced Search 1–10 of 157 documents found Edmund Husserl was the principal founder of phenomenology—and thus one of the most influential philosophers of the 20th century. He has made important contributions to almost all areas of philosophy and anticipated central ideas of its neighbouring disciplines such as linguistics, sociology ... Christian Beyer Husserl, the Brain and Cognitive Science 1. Varela and van Gelder: retention without representation 2. Many authors use the term ‘psychologism’ for what they perceive as the mistake of identifying non-psychological with psychological entities. Martin Kusch Phenomenology is the study of structures of consciousness as experienced from the first-person point of view. David Woodruff Smith Roman Ingarden (1893 – 1970) was a Polish phenomenologist, ontologist and aesthetician. Amie Thomasson A system of categories is a complete list of highest kinds or genera. Shaun Gallagher and Dan Zahavi James DuBois and Barry Smith Charles Siewert Michael Barber

Affects, Objects and Lyric Identity – Kairosis Affects, Objects and Lyric Identity Dr Keith Russell keith.russell@newcastle.edu.au See Kenosis, Katharsis, Kairosis: A Theory of Literary Afffects There are three main models of identity in Western philosophy. The lyric artist is expert in the search for what T.S. Any object that is taken over as an objective correlative is a designed object in that the object is being brought to attention for the purpose of its ability to illuminate the human condition.

Closer to a Poetics of Design and Play – Kairosis Towards a Poetics of Design Keith Russellkeith.russell@newcastle.edu.au Abstract Design as we might and will, there is something altogether too concrete about things designed; the outcome of the process of designing is too much there, too much its own put on face. Taking off this mask reveals the abject enclosed in the object as presence. Play as we might and will, there is something fundamentally suspect about our playing; the outcome of our play evidences the abject as absence in the consequent objects of our play. In the heaped-up of the human world, are we more than garbage women and men? One sits and beats an old tin can, lard pail. One beats and beats for that which one believes. That’s what one wants to get near. Be merely oneself, as superior as the ear To a crow’s voice? Pack the heart and scratch the mind? Solace itself in peevish birds? Is it a philosopher’s honeymoon, one finds On the dump? 1. Some makers bother to offer an account of their virtue. I despise provincial utopias.

Kenosis Katharsis Kairosis – Kairosis Aristotle, in his Poetics, offers the affect of Katharsis (Catharsis) to account for the particular emotional experience of an audience watching a play. While he refers to the other two traditional genres, the epic (novel) and the lyric (poetry), Aristotle does not offer equivalent affects for these other two genres. Since Aristotle, this absence of affective categories has gone unnoticed. Literary criticism and psychology have employed Katharsis to describe affects regardless of the adequacy of the concept of purging or cleansing to the experiences of art and individuals. In his PhD thesis (University of Newcastle, 1990 – Keith Russell offers an expanded set of affects to account for the three genres. In its simplest form. While these extended affective concepts have their origins in theology, Russell develops literary uses in parallel and comparison with the historic uses of Katharsis. Katharsis (Catharsis) Katharsis means purging or self-cleansing.

Queer Phenomenology: Orientations, Objects, Others - Sara Ahmed DIVIn this groundbreaking work, Sara Ahmed demonstrates how queer studies can put phenomenology to productive use. Focusing on the “orientation” aspect of “sexual orientation” and the “orient” in “orientalism,” Ahmed examines what it means for bodies to be situated in space and time. Bodies take shape as they move through the world directing themselves toward or away from objects and others. Being “orientated” means feeling at home, knowing where one stands, or having certain objects within reach. Ahmed proposes that a queer phenomenology might investigate not only how the concept of orientation is informed by phenomenology but also the orientation of phenomenology itself.

instrumentality At the beginning of its history, philosophy separates tekhné from épistémé, a distinction that had not yet been made in Homeric times. The separation is determined by a political context, one in which the philosopher accuses the Sophist of instrumentalizing the logos as rhetoric and logography, that is, as both instrument of power and renunciation of knowledge. (ref to Francois Châtelet, Platon, in Bernard Stiegler, Technics and Time, p.1) (is this a reference to Plato's Phaedrus?) In Heideggerian vocabulary, the techné of the Western project is an instrumentality that takes over, arrests, or enframes what it desires to manipulate or contain. Techné is usually translated as art, but it means more precisely the orderly application of knowledge for the purpose of producing a specific, predermined product. Max Weber saw instrumental rationnality as part of the modernizing process, as the "value free" calculable efficiency of administrative process. J.J.

Martin Heidegger First published Wed Oct 12, 2011 Martin Heidegger (1889–1976) was a German philosopher whose work is perhaps most readily associated with phenomenology and existentialism, although his thinking should be identified as part of such philosophical movements only with extreme care and qualification. His ideas have exerted a seminal influence on the development of contemporary European philosophy. They have also had an impact far beyond philosophy, for example in architectural theory (see e.g., Sharr 2007), literary criticism (see e.g., Ziarek 1989), theology (see e.g., Caputo 1993), psychotherapy (see e.g., Binswanger 1943/1964, Guignon 1993) and cognitive science (see e.g., Dreyfus 1992, 2008; Wheeler 2005; Kiverstein and Wheeler forthcoming). 1. Martin Heidegger was born in Messkirch, Germany, on September 26, 1889. Heidegger's philosophical development began when he read Brentano and Aristotle, plus the latter's medieval scholastic interpreters. 2. 2.1 The Text and its Pre-History