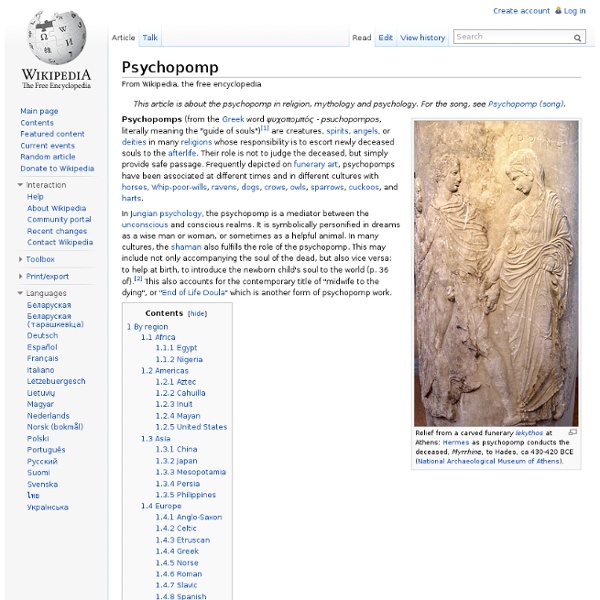 In Jungian psychology, the psychopomp is a mediator between the unconscious and conscious realms. It is symbolically personified in dreams as a wise man or woman, or sometimes as a helpful animal. In many cultures, the shaman also fulfills the role of the psychopomp. This may include not only accompanying the soul of the dead, but also vice versa: to help at birth, to introduce the newborn child's soul to the world (p. 36 of).[2] This also accounts for the contemporary title of "midwife to the dying", or "End of Life Doula" which is another form of psychopomp work. By region[edit] Africa[edit] Dead ancestors Egypt[edit] Nigeria[edit] Americas[edit] Aztec[edit] Xolotl Cahuilla[edit] Muut Inuit[edit] Mayan[edit] Ixtab United States[edit] Asia[edit] China[edit] Japan[edit] Shinigami Mesopotamia[edit] Namtar Persia[edit] Mithra Philippines[edit] Europe[edit] Anglo-Saxon[edit] Wōden Celtic[edit] Etruscan[edit] Greek[edit] Norse[edit] Roman[edit] Slavic[edit] Spanish[edit] Santa Compaña Welsh[edit] Gwyn ap Nudd Polynesia[edit]

Kelley Harrell: You Don't Call, You Don't Write... The Quiet Dead During the Samhain season much emphasis is put on spirits, ghosts and things that go bump in the night. As psychopomp is a critical role of my personal and professional shamanic path, I'm often approached by those who want me to communicate with deceased loved ones. In some cases a different scenario arises and I'm asked, "Why doesn't my deceased loved one visit me?" My immediate response is, "How do know your loved one doesn't?" There is an assumption that because we are emotionally close to a deceased loved one that we are open to and will recognize a visit from that dear soul. It's an understandable assumption, as our culture generally sensationalizes and romanticizes interactions with the deceased.

List of lunar deities The Hindu Chandra, riding his celestial chariot. Moon in mythology[edit] Also of significance is that many religions and societies are oriented chronologically by the Moon as opposed to the sun. One common example is Hinduism in which the word Chandra means Moon and has religious significance during many Hindu festivals (e.g. Karwa Chauth, Sankasht Chaturthi and during the eclipses). The moon is also worshipped in witchcraft, both in its modern form and in Medieval times, for example, in the cult of Madonna Oriente. Off Grid Info - Food Independence - Where To Get Heirloom Seeds - Non-GMO Seeds - Organic Seeds Join 53,000+ Fans of Off-Grid: Please Share This Page: StumbleUpon Google +

The Psychopomp SOuL Searchers - Articles Many religious belief systems have a particular spirit, deity, demon or angel whose responsibility is to escort newly-deceased souls to the afterlife. These creatures are called psychopomps or death walkers. The term psychopomp from the Greek word psychopompos, literally meaning the "guide of souls". They were often associated with animals such as horses, whippoorwills, ravens, dogs, crows, owls, sparrows, harts, and dolphins. In Mythology a psychopomp was primarily a god or goddess of the Underworld. Sky father "Sky Father" is a direct translation of the Vedic Dyaus Pita, etymologically identical to the Greek Zeus Pater.[1] While there are numerous parallels adduced from outside of Indo-European mythology, the concept is far from universal (e.g. Egyptian mythology has a "Heavenly Mother"). "Sky Father" in historical mythology[edit] "Nomadic" hypothesis[edit]

Overlooked Bug Out Bag essentials - Geek Prepper Overlooked Bug Out Bag essentials happen. There are tons of great sites with tons of great lists covering the items you need in your bug out bag, or to have on-hand for bugging in. Now we’re putting out our list of some essential items that seem to get over looked. This is just part 1, we’re going to keep brainstorming and investigating this topic. Sewing Awl: You can use this to repair items made of tough materials, like leather and canvas. Contemporary Shamanism The deathwalker is not a grim reaper; they are releasing that which is trapped, moving that which is beyond life, but not yet truly within the clutches of death. Shamans are often identified in older or more primitive cultures as essential in aiding the process of fertility and birth. Very often, in modern society, we want to overlook another one of their fundamental tasks in serving their communities, and that is to be there also at the end of life, assisting the dying and those departed on their journeys from this world. This is not Hollywood; the deathwalker perceives their task as part of the necessary cycle of life and one that they are particularly adept at through virtue of their own predilections. We have no issues when we look at primitive cultures in allowing for both those positions in a shamanic culture, but in our own we have defied both in order to embrace what we like to think of as more culturally sophisticated and civilized behaviors.

Dying-and-rising god The methods of death can be diverse, the Norse Baldr mistakenly dies by the arrow of his blind brother, the Aztec Quetzalcoatl sets himself on fire after over-drinking, and the Japanese Izanami dies of a fever.[2][15] Some gods who die are also seen as either returning or bringing about life in some other form, in many cases associated with a vegetation deity related to a staple.[2][16] The very existence of the category "dying-and-rising-god" was debated throughout the 20th century, and the soundness of the category was widely questioned, given that many of the proposed gods did not return in a permanent sense as the same deity.[1][2][17] By the end of the 20th century, scholarly consensus had formed against the reasoning used to suggest the category, and it was generally considered inappropriate from a historical perspective.[2][18] Overview[edit]

Grow Sweet Potatoes — Even in the North - Organic Gardening Related Content Growing Calories Grow to fill yourself up from your garden. Potatoes will give you the most calories in the least spa... Infinity Imagined A stereo image of Jupiter’s atmosphere, derived from data collected by the Juno spacecraft during perijove 3. These images, taken at different point in the orbit, can be combined to reveal the 3D structure and relief of clouds in the southern atmosphere. To see the image in 3D, relax the eyes until the white circles overlap, then look at the image. Alternatively the image can be viewed with Google Cardboard or another VR device. Image source: NASA Processing: James Tyrwhitt-Drake

The Deathwalker's Role SOuL Searchers - Articles by Janine Donnellan A shaman is a conduit to the spirit world. The shaman's world is one populated by spirits of ancestors, of plants and animals and of the other astral beings who share the physical world and the other realms of existence.

Solar deity Statue of Hathor – Luxor Museum The winged sun was an ancient (3rd millennium BC) symbol of Horus, later identified with Ra A solar deity (also sun god/dess) is a sky deity who represents the Sun, or an aspect of it, usually by its perceived power and strength. Solar deities and sun worship can be found throughout most of recorded history in various forms. Hence, many beliefs have formed around this worship, such as the "missing sun" found in many cultures. Overview[edit]

10 Smart Ideas My Redneck Neighbor Taught Me - Online Survival Blog & Survival News I found this great story from a “non-prepper” and thought you guys and gals might get a kick out of this! Enjoy and let me know what you think. If these idea’s get you thinking about your own preparations you need to see this: Most neighborhoods have “those neighbors” that you can’t really avoid. Part of living in suburbia, however, is learning how to deal with them, ignore them, or learn to like them.

Baphomet "Bahomet" redirects here. It is not to be confused with Bahamut. The 19th century image of a Sabbatic Goat, created by Eliphas Levi. The arms bear the Latin words SOLVE (separate) and COAGULA (join together), i.e., the power of "binding and loosing" usurped from God and, according to Catholic tradition, from the ecclesiastical hierarchy acting as God's representative on Earth. The original goat pentagram first appeared in the book "La Clef de la Magie Noire" by French occultist Stanislas de Guaita, in 1897.