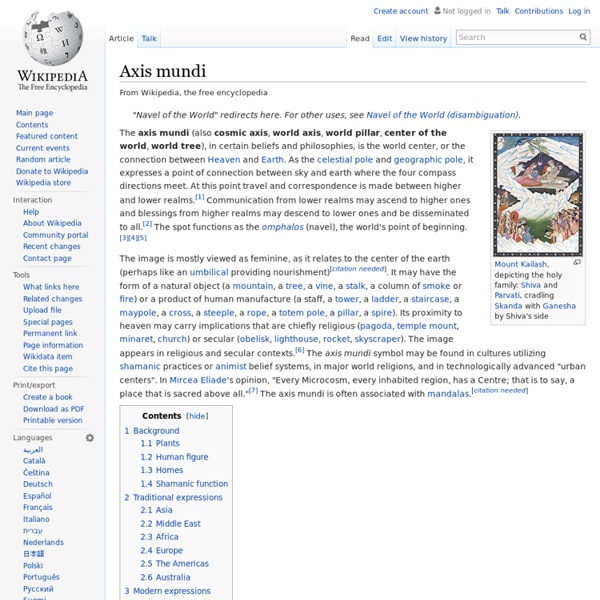 The axis mundi (also cosmic axis, world axis, world pillar, center of the world, world tree), in certain beliefs and philosophies, is the world center, or the connection between Heaven and Earth. As the celestial pole and geographic pole, it expresses a point of connection between sky and earth where the four compass directions meet. At this point travel and correspondence is made between higher and lower realms.[1] Communication from lower realms may ascend to higher ones and blessings from higher realms may descend to lower ones and be disseminated to all.[2] The spot functions as the omphalos (navel), the world's point of beginning.[3][4][5] Background[edit] The symbol originates in a natural and universal psychological perception: that the spot one occupies stands at "the center of the world". Plants[edit] Plants often serve as images of the axis mundi. Human figure[edit] Homes[edit] Homes can represent world centers. Shamanic function[edit] Traditional expressions[edit] Asia[edit]

Spiritual practice A spiritual practice or spiritual discipline (often including spiritual exercises ) is the regular or full-time performance of actions and activities undertaken for the purpose of cultivating spiritual development . A common metaphor used in the spiritual traditions of the world's great religions is that of walking a path. [ 1 ] Therefore a spiritual practice moves a person along a path towards a goal. The goal is variously referred to as salvation , liberation or union (with God). A person who walks such a path is sometimes referred to as a wayfarer or a pilgrim . [ edit ] Abrahamic religions [ edit ] Baha'i Faith Prayer in the Bahá'í Faith refers to two distinct concepts: obligatory prayer and devotional prayer (general prayer). [ edit ] Christianity The Religious Society of Friends (also known as the Quakers) practices silent worship, which is punctuated by vocal ministry. [ edit ] Islam [ edit ] Judaism [ edit ] Indian religions [ edit ] Buddhism [ edit ] Hinduism [ edit ] Other

Messiah ben Joseph Messianic tradition[edit] Jewish tradition alludes to four messianic figures. Called the Four Craftsmen, each will be involved in ushering in the Messianic age. Sources in chronological order[edit] The Dead Sea Scrolls[edit] While the Dead Sea scrolls do not explicitly refer to a Messiah ben Joseph, a plethora of messianic figures are displayed. The poly-messianic Testimonia text 4Q175 presents a prophet similar to Moses, a messianic figure and a priestly teacher.[8]: 89 The Test contains four testimonium.[9] The fourth testimonium is about Joshua and is generally viewed as non-messianic. Gabriel's Revelation[edit] Gabriel's Revelation is a stone tablet. The text seems to be based on a Jewish revolt recorded by Josephus dating from 4 BCE. Testaments of the Twelve Patriarchs[edit] Talmud[edit] The Talmud uses the Hebrew ben rather than the Aramaic bar when giving the linage of these messiahs, suggesting a date before 200 CE. Targum[edit] The common Targum for Zechariah 12.10 is non-messianic.

Theodicy Theological attempt to resolve the problem of evil Gottfried Leibniz coined the term "theodicy" in an attempt to justify God's existence in light of the apparent imperfections of the world. Theodicy () means vindication of God. It is to answer the question of why a good God permits the manifestation of evil, thus resolving the issue of the problem of evil. Some theodicies also address the evidential problem of evil by attempting "to make the existence of an all-knowing, all-powerful and all-good or omnibenevolent God consistent with the existence of evil or suffering in the world. the Plotinian theodicy, named after Plotinusthe Augustinian theodicy, which Hick based on the writings of Augustine of Hippothe Irenaean theodicy, which Hick developed, based on the thinking of St. The problem was also analyzed by pre-modern theologians and philosophers in the Islamic world. Definition and etymology[edit] As a response to the problem of evil, a theodicy is distinct from a defence. History[edit]

Nondualism Nondualism, also called non-duality, "points to the idea that the universe and all its multiplicity are ultimately expressions or appearances of one essential reality." It is a term and concept used to define various strands of religious and spiritual thought. Its origins are situated within the Buddhist tradition with its teaching of the two truths doctrine, the nonduality of the absolute and the relative, and the Yogacara notion of "pure consciousness" or "representation-only" (vijñapti-mātra). The term has more commonly become associated with the Advaita Vedanta tradition of Adi Shankara, which took over the Buddhis notion of pure consciousness and provided an orthodox hermeneutical basis for heterodox Buddhist phenomology. In various strands of modern spirituality, New Age and Neo-Advaita, the "primordial, natural awareness without subject or object"[web 1] is seen as the essence of a variety of religious traditions. Definitions[edit] Dictionary definitions of "nondualism" are scarce.

Hylics Hylic (from Greek ύλη (hylē) "matter") is the opposite of psychic (from Greek ψυχή (psychē) "soul"). Somatics were deemed completely bound to matter. Matter, the material world, was considered evil by the gnostics. The material world was created by a demiurge, in some instances a blind, mad God, in others an army of rebellious angels as a trap for the spiritual Ennoia. Somatics were human in form, but since their entire focus was on the material world, such as eating, sleeping, mating, creature comforts, they were seen as doomed. For consideration of these dynamics see for example, The Gospel of Judas, believed to be a gnostic text, where Jesus is posited as a pneumatic and the other disciples, non-gnostics, as somatics. Jump up ^ Freke, Timothy (2001).

Kali Yuga Not to be confused with Kali Yug, a 1963 Italian film Current Yuga[edit] The duration and chronological starting point in human history of Kali Yuga has given rise to different evaluations and interpretations. According to the Surya Siddhanta, Kali Yuga began at midnight (00:00) on 18 February 3102 BCE[1] in the proleptic Julian calendar, or 14 January 3102 BCE in the proleptic Gregorian calendar. This date is also considered by many Hindus to be the day that Krishna left Earth to return to his abode. Most interpreters of Hindu scriptures believe that Earth is currently in Kali Yuga. Attributes of Kali Yuga[edit] Hindus believe that human civilization degenerates spiritually during the Kali Yuga,[5] which is referred to as the Dark Age because in it people are as far away as possible from God. References in the Mahabharata[edit] The Mahabharata War and the decimation of Yadavas thus happened at the Yuga-Sandhi, the point of transition from one yuga to another. 10,000 year "Golden Age"[edit]

Obsession (Spiritism) Obsession, also known as spirit obsession, is a technical term within the Spiritist belief and practice defined by the author Allan Kardec as the interference of a subjugating spirit with a weaker spirit (cf. Latin obsidere, "besiege").[1][2] Although the term most commonly refers to the negative influence of the spirit of an evil deceased person on the mind or spirit of a living person, obsession can occur in either direction. Obsession is believed by many Spiritists to be a major danger to unprepared and untrained mediums. It is also believed to be one of the most frequent causes of mental illness and criminal behaviour.[1][2] Because the danger of obsession is a core belief within Spiritism, dealing with it is one of the cornerstones of Spiritist religious activity, and it is treated at Spiritist centres by means of prayer and teaching. a spirit influences a living person,a living person influences someone else,a living person influences a spirit,a spirit influences another spirit.

Spiritual direction Spiritual direction is the practice of being with people as they attempt to deepen their relationship with the divine, or to learn and grow in their own personal spirituality. The person seeking direction shares stories of his or her encounters of the divine, or how he or she is experiencing spiritual issues. The director listens and asks questions to assist the directee in his or her process of reflection and spiritual growth. Forms[edit] Regular direction can involve a one to two hour meeting every four to eight weeks, and thus is slightly less intense than retreat direction, although spiritual exercises and disciplines are often given for the directee to attempt between meetings. If the directee is on a retreat (lasting a weekend, a week or even 40 days), he or she will generally meet with their director on a daily basis for one hour. The Spiritual Exercises of Ignatius of Loyola are a popular example of guidelines used for spiritual direction. Historical Traditions[edit] Judaism[edit]

Shi'ur Qomah Shi’ur Qomah (Hebrew: שיעור קומה, lit. Divine Dimensions or Elevation Gate) is a Midrashic text that is part of the Heichalot literature. It purports to record, in anthropomorphic terms, the secret names and precise measurements of God’s corporeal limbs and parts. Provenance & Rabbinic Understanding[edit] Currently the text exists only in fragmentary form, and scholars have debated how to appropriately date it. Notes and references[edit] Jump up ^ “Everyone who knows the measure of the Creator is sure to be a son of the World to Come, and will be saved from the punishment of Gehinnom, and from all kind of punishments and evil decrees about to befall the world, and will be saved from all kind of witchcraft, for He saves us, protects us, redeems us, and rescues me from all evil things, from all harsh decrees, and from all kinds of punishments for the sake of His Great Name.” See also[edit] External links[edit]

Anima mundi World soul Therefore, we may consequently state that: this world is indeed a living being endowed with a soul and intelligence ... a single visible living entity containing all other living entities, which by their nature are all related.[1] Other resemblances can be found in the thoughts of hermetic philosophers like Paracelsus, and by Baruch Spinoza, Gottfried Leibniz, Friedrich Schelling and in Hegel's Geist ("Spirit"/"Mind"). In Jewish mysticism, a parallel concept is that of "Chokhmah Ila'ah," the all-encompassing "Supernal Wisdom" that transcends, orders and vitalizes all of creation. See also[edit] References[edit]