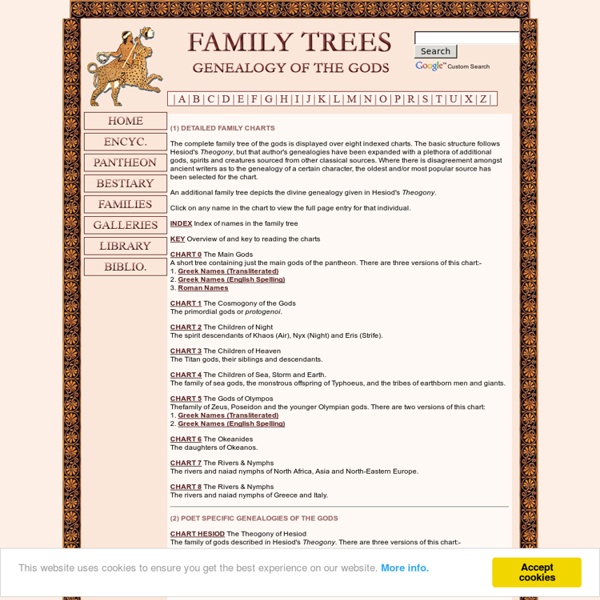 The complete family tree of the gods is displayed over eight indexed charts. The basic structure follows Hesiod's Theogony, but that author's genealogies have been expanded with a plethora of additional gods, spirits and creatures sourced from other classical sources. Where there is disagreement amongst ancient writers as to the genealogy of a certain character, the oldest and/or most popular source has been selected for the chart. An additional family tree depicts the divine genealogy given in Hesiod's Theogony. Click on any name in the chart to view the full page entry for that individual. INDEX Index of names in the family tree KEY Overview of and key to reading the charts CHART 0 The Main Gods A short tree containing just the main gods of the pantheon. CHART 1 The Cosmogony of the Gods The primordial gods or protogenoi. CHART 2 The Children of Night The spirit descendants of Khaos (Air), Nyx (Night) and Eris (Strife). CHART 4 The Children of Sea, Storm and Earth.

Witches of Cornwall Macabre evidence of age-old spells surfaces in an archaeologist's front yard Archaeologist Jacqui Wood holds a fragment of a cauldron unearthed from a buried spring-fed pool near her home. This and other artifacts she has found point to a long history of ritual and witchcraft. The Egyptian God Family Tree – Veritable Hokum First: I opened a store! It has a poster of this, as well as updated versions of the Norse and Greek god family trees I did a while back. More to come soon. Next, a disclaimer: this family tree isn’t, strictly speaking, historically accurate, because what we think of as The Egyptian Pantheon is really a whole bunch of similar-but-not-identical pantheons which were mostly based in individual cities – Thebes, Heliopolis, Memphis, etc. – and went through a lot of changes over their 3000+ year history.

35 Pieces Of Advice From A 100-Year-Old A woman who can see things through the eye of experience shares 35 tips on what she learned from 100 years of life. 1. Even if you feel hatred, keep it to yourself. astral hygiene Healthiest Regimen For Beginners , Lifestyle, News, astral hygiene, bodily care, Cleansing, cleansing kits, detox, detoxing the body, healthiest regimen, healthy living, how to cleanse, natural products, skin rejuvenation, vegan diet If you are on the path of seeking to make your body and mind healthier, then here you will find a guide that will demonstrate the importance of natural substances and provide products links in order for you to live...

The Top 37 Things You’ll Regret When You’re Old (Pay Attention To #15) 1. Not traveling when you had the chance. Traveling becomes infinitely harder the older you get, especially if you have a family and need to pay the way for three-plus people instead of just yourself. 2. Gaia hypothesis The study of planetary habitability is partly based upon extrapolation from knowledge of the Earth's conditions, as the Earth is the only planet currently known to harbour life The Gaia hypothesis, also known as Gaia theory or Gaia principle, proposes that organisms interact with their inorganic surroundings on Earth to form a self-regulating, complex system that contributes to maintaining the conditions for life on the planet. Topics of interest include how the biosphere and the evolution of life forms affect the stability of global temperature, ocean salinity, oxygen in the atmosphere and other environmental variables that affect the habitability of Earth. Introduction[edit] Less accepted versions of the hypothesis claim that changes in the biosphere are brought about through the coordination of living organisms and maintain those conditions through homeostasis. In some versions of Gaia philosophy, all lifeforms are considered part of one single living planetary being called Gaia.

Greek Gods Family Tree ludios.org Sumerian cuneiform script and Sumerian language Sumerian was spoken in Sumer in southern Mesopotamia (part of modern Iraq) from perhaps the 4th millennium BC until about 2,000 BC, when it was replaced by Akkadian as a spoken language, though continued to be used in writing for religious, artistic and scholarly purposes until about the 1st century AD. Sumerian is not related to any other known language so is classified as a language isolate. Sumerian cuneiform Sumerian cuneiform is the earliest known writing system.

The Magical Herbalist’s Mini Guide to Popular Herbs, Plants, Fruits, Flowers & Their Magical Properties… The herbs listed below that are marked with a * next to it, should never be consumed without the correct & legal amount made & distributed by that of a qualified herbalist. They are extremely dangerous herbs, especially when used incorrectly… Let us start the list of most popular herbs alphabetically: Absinthium *A healing herb that promotes good health, vigour & an active agent to fight off disease.