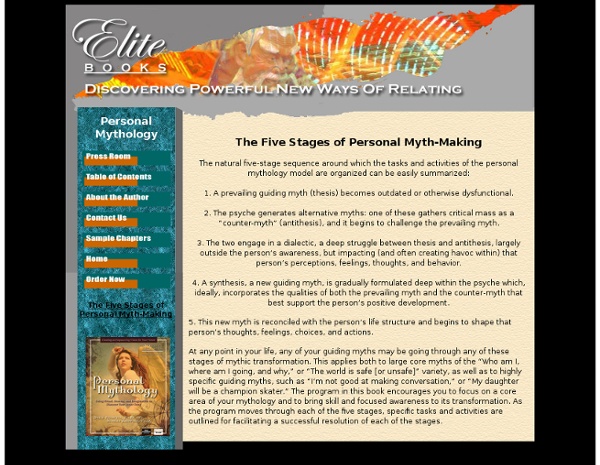 The Five Stages of Personal Myth-Making The natural five-stage sequence around which the tasks and activities of the personal mythology model are organized can be easily summarized: 1. A prevailing guiding myth (thesis) becomes outdated or otherwise dysfunctional. 2. The psyche generates alternative myths: one of these gathers critical mass as a “counter-myth” (antithesis), and it begins to challenge the prevailing myth. 3. 4. 5. At any point in your life, any of your guiding myths may be going through any of these stages of mythic transformation.

Fowler Stages of Faith From Joann Wolski Conn (ed.), Women’s Spirituality: Resources for Christian Development. (Paulist, 1986), pp. 226-232. Stages of Faith James Fowler Stage I Intuitive-Projective faith is the fantasy-filled, imitative phase in which the child can be powerfully and permanently influenced by examples, moods, actions and stories of the visible faith of primally related adults. The stage most typical of the child of three to seven, it is marked by a relative fluidity of thought patterns. The gift or emergent strength of this stage is the birth of imagination, the ability to unify and grasp the experience-world in powerful images and as presented in stories that register the child's intuitive understandings and feelings toward the ultimate conditions of existence. The main factor precipitating transition to the next stage is the emergence of concrete operational thinking. In Stage 3 Synthetic-Conventional faith, a person's experience of the world now extends beyond the family.

www.galactic-server.com/rampa/rahermit3.html So back to the hermits cave where he told the unbeliveable story to young Lobsang: ….glumly the young monk set about the task of separating the layers of bark. The dark outer skin, coarse and rugged helped to feed the flames. The smooth, greenish-white under layer to be torn into shreds and stuffed into the now-boiling water. Gloomily he tossed in the last lump of tea and jumped high as a splash of boiling water scalded his wrist. The old hermit held out his bowl. Sitting in the gloom of the cave at the feet of the Venerable One, with the daylight growing stronger and stronger outside, the young monk thought that he had been sitting thus for a whole eternity. 'I was as a disembodied spirit spiralling down to the great castle which housed the Master of this Supreme World,' commenced the old hermit 'I was longing to see what manner of man commanded the respect and love of some of the most powerful worlds in existence. '"That wall," murmured the Voice, "is a Death Barrier. 'Nine old men.

Lawyers, Guns & Money Start Your Day in 33 Different Ways Mornings are underrated. I consider them fundamental for the whole diurnal experience. What you do in the very first moments of your morning will fundamentally and inexorably shape your entire day. Most of the time you spend your mornings by routinely performing some habits, on auto pilot. Consciously inserting your intentions in these very first moments will have a huge effect. Here are at least 33 ways in which you can transform your days by only spending 5 minutes every morning. 1. I love the morning stillness and the unspoken promise of something ready to start. 2. And do nothing. 3. Point your mind to something you’re really grateful for and stay there. 4. Regardless of the current season. 5. You’re going to spot it pretty easily if you put your mind to it. 6. Write an answer to an old question, do part of a small chore, move an object out of somebody’s way. 7. EmptyÂ your mind and isolate from your environment. 8. 9. Like in getting physical. 10. 11. Let go. 12. 13. 14. 15. 16.

logic and perception - topical index -The Skeptics Dictionary - Skepdic.com - StumbleUpon Last updated 20-Nov-2015 Recommended Reading Critical Thinking Mini-Lessons Adams, James L. Conceptual Blockbusting: A Guide to Better Ideas 3rd ed. Ariely, Dan. (2008). Dawes, Robyn M. Gardner, Martin. Gardner, Martin. Gilovich, Thomas. Groopman, Jerome. Kahneman, Daniel. Kida, Thomas. 2006. Kourany, Janet A. Levine, Robert. 2003. Sagan, Carl. Seckel, Al. (2006). Sternberg, Robert J. ed. Sutherland, Stuart. (2007). Mountains of Books Become Mountains I thought I’d seen every type of book carving imaginable, until I ran across these jaw dropping creations by Guy Laramee. His works are so sculptural, so movingly natural in their form, they’ve really touched me. His works are inspired by a fascination with so-called progress in society: a thinking which says the book is dead, libraries are obsolete and technology is the only way of the future. His thoughts: “One might say: so what? Do we really believe that “new technologies” will change anything concerning our existential dilemma, our human condition? See Also INCREDIBLE 3D ILLUSTRATIONS JUMP OUT OF THE SKETCHBOOK Carving into the discarded stacks of books, he has created fantastic, romantic landscapes which remind us that though our fascinations and the value we put on different ideas have changed, we as a species have not evolved that much. “Mountains of disused knowledge return to what they really are: mountains. See more of his beautifully meditative works at guylaramee.com.

Blog Today is Equal Pay Day, a reminder that women and men are not always compensated at the same rate. While the widely reported statistic that women, on average, earn 77 cents to every man’s dollar has been is a great indicator that women are put in situations every day that for a variety of reasons mean they earn less, it has been criticized for not measuring individuals of similar characteristics, such as age, occupation, education, or experience. To try to get a better understanding of the gender wage gap among specific age groups, and given that many high school and college seniors are on the brink of graduating and entering the labor force, I thought it would be interesting look at the gender wage gap by age and education, to see how women and men fare as they enter today’s unsteady labor market. To close the gender wage gap, women need to see real wage growth faster than their male counterparts.