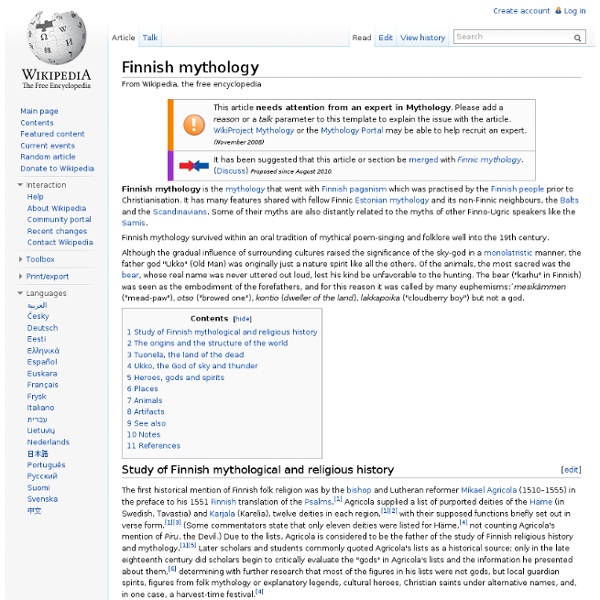 Finnish mythology is the mythology that goes with Finnish paganism, of which a modern revival is practiced by a small percentage of the Finnish people. It has many features shared with fellow Finnic Estonian mythology and its non-Finnic neighbours, the Balts and the Scandinavians. Some of their myths are also distantly related to the myths of other Finno-Ugric speakers like the Samis. Finnish mythology survived within an oral tradition of mythical poem-singing and folklore well into the 19th century. Although the gradual influence of surrounding cultures raised the significance of the sky-god in a monolatristic manner, the father god "Ukko" (Old Man) was originally just a nature spirit like all the others. Study of Finnish mythological and religious history[edit] Cristfried Ganander's Mythologia Fennica, published in 1789, was the first truly scholarly foray into Finnish mythology. The origins and the structure of the world[edit] Structure of the world, according to Finnish mythology.

Shamanism in Siberia Northern Asia, particularly Siberia, is regarded as the locus classicus of shamanism.[1] It is inhabited by a variety of ethnic groups, many of whom observe shamanistic practices even in modern times. Many classical ethnographic sources of “shamanism” were recorded among Siberian peoples. These cultures are far from being alike. Terms for 'shaman' and 'shamaness' in Siberian languages[edit] 'shaman': saman (Nedigal, Nanay, Ulcha, Orok), sama (Manchu). Spirit-journey[edit] Siberian shamans' spirit-journeys[7] (re-acting their dreams wherein they had rescued the soul of the client) were conducted in, e.g., Oroch, Altai, and Nganasan healing séances. Songs, music[edit] As mentioned above, shamanistic practice shows great diversity,[2] even if restricted to Siberia. The intention to mimic natural sounds is present in some Siberian cultures as well: overtone singing, and also shamanic songs of some cultures can be examples. Grouped by linguistic relatedness[edit] Uralic languages. Uralic[edit]

Finnish Mythology Finnish Mythology in Context Finnish mythology, like that of many other cultures, tells the stories of gods and legendary heroes . Most of the myths date from pre-Christian times and were passed from generation to generation by storytellers. A work called the Kalevala (pronounced kah-luh-VAH-luh), which the Finnish people consider their national epic, contains many of the legends. The myths of the Kalevala reflect several unique aspects of Finnish culture. Core Deities and Characters The word Kakvala, which means “land of the descendants of Kaleva,” is an imaginary region associated with Finland. Vainamoinen (pronounced vye-nuh-MOY-nen), one of the heroes in the Kakvala, is a wise old seer who can see the future and work magic through the songs that he sings. Vainamoinen and Lemminkainen have certain experiences and goals in common. A number of other figures become involved with these leading characters. Major Myths Vainamoinen plans to marry Aino, and her parents encourage the match.

Inuit mythology Inuit mythology has many similarities to the religions of other polar regions. Inuit traditional religious practices could be very briefly summarised as a form of shamanism based on animist principles.[1] In some respects, Inuit mythology stretches the common conception of what the term "mythology" means. Inuit traditional cosmology is not religion in the usual theological sense, and is similar to what most people think of as mythology only in that it is a narrative about the world and the place of people in it. Anirniit[edit] The harshness and randomness of life in the Arctic ensured that Inuit lived constantly in fear of unseen forces. The anirniit are seen to be a part of the sila — the sky or air around them — and are merely borrowed from it. Since the arrival of Christianity among the Inuit, anirniq has become the accepted word for a soul in the Christian sense. Tuurngait[edit] Some spirits are by nature unconnected to physical bodies. Angakuit[edit] Deities[edit] Notes[edit]

Kalevala 19th-century work of epic poetry The Kalevala (Finnish: Kalevala, IPA: [ˈkɑleʋɑlɑ]) is a 19th-century work of epic poetry compiled by Elias Lönnrot from Karelian and Finnish oral folklore and mythology,[1] telling an epic story about the Creation of the Earth, describing the controversies and retaliatory voyages between the peoples of the land of Kalevala called Väinölä and the land of Pohjola and their various protagonists and antagonists, as well as the construction and robbery of the epic mythical wealth-making machine Sampo.[2] The Kalevala is regarded as the national epic of Karelia and Finland[Note 1] and is one of the most significant works of Finnish literature with J. L. The first version of the Kalevala, called the Old Kalevala, was published in 1835, consisting of 12,078 verses. Collection and compilation[edit] Elias Lönnrot[edit] Elias Lönnrot (9 April 1802 – 19 March 1884) was a physician, botanist, linguist, and poet. Poetry[edit] History[edit] Lönnrot's field trips[edit] J.

Hulder Seductive forest creature found in Scandinavian folklore A hulder (or huldra) is a seductive forest creature found in Scandinavian folklore. Her name derives from a root meaning "covered" or "secret".[1] In Norwegian folklore, she is known as huldra ("the [archetypal] hulder", though folklore presupposes that there is an entire Hulder race and not just a single individual). She is known as the skogsrå "forest spirit" or Tallemaja "pine tree Mary" in Swedish folklore, and ulda in Sámi folklore. The word hulder is only used of a female; a "male hulder" is called a huldrekall and also appears in Norwegian folklore. Though described as beautiful, the huldra is noted for having a distinctive inhuman feature—an animal's tail (usually a cow's or a fox's) and/or a back resembling a hollowed-out tree. Folklore[edit] More information can be found in the collected Norwegian folktales of Peter Christen Asbjørnsen and Jørgen Moe. Relations with humans[edit] A hulder is talking with a charcoal burner.

Sami shamanism Animal spirits[edit] Aside from the Bear Cult, there are other animal spirits such as the Haldi who watched over nature. Some Sami people had a thunder god called Tiermes, sometimes called Horagalles. The forest-god of the Sami, Laib olmai ruled over all forest animals, which were regarded as his herds, and luck in hunting, or the reverse, depended on his good will. Sieidis[edit] In the landscape throughout Northern Scandinavia, one can find sieidis, places that have unusual land forms different from the surrounding countryside. The clan and family gods of the Sami are known in different parts of Sapmi under the name of Seita, Sieidis or Storjunkare. Noaide[edit] A noaidi was a mediator between the human world and saivo, the underworld, for the least of community problems. Elements of Norse mythology as well as Christian ideas are found in the later practices. Sámi peoples in northern Scandinavia today belong to Christian churches. Ancestors[edit] Deities[edit] See also[edit]

Huldra – The Seductive Forest Beings of Norse Mythology - Symbol Sage Affiliate Disclosures The huldra or hulder may sound rugged and masculine but they are actually exceptionally fair female mystical beings in Norse mythology. In fact, through their varying myths and legends across all Nordic and Germanic people, the Huldra can be credited as the origin of many subsequent mythological creatures such as elves, witches, the Slavic samodiva, and others. Who are the Huldra? The huldra are beautiful and seductive forest beings in Germanic and Scandinavian folklore. Their name generally translates as “covered” or “secret”, likely because the huldra usually tryed to hide their mystical nature from people. Other names for the huldra include skogsrå or “forest spirit”, tallemaja or “pine tree Mary” in Sweden, and ulda in Sámi (Lapplander) folklore. However, the huldrekall are very different from the female forest dwellers. What Type of Beings are the Huldra? Most Norse folklore describes the huldra as a type of rå – nature’s keepers or wardens in Norse mythology.

Sampo Magical artifact in Finnish mythology In Finnish mythology, the Sampo (pronounced [ˈsɑmpo])[1] is a magical device or object described in many different ways that was constructed by the blacksmith Ilmarinen and that brought riches and good fortune to its holder (akin to the horn of plenty [cornucopia] of Greek mythology). When the Sampo was stolen, Ilmarinen's homeland fell upon hard times. He sent an expedition to retrieve it, but in the ensuing battle it was smashed and lost at sea. In the Kalevala[edit] The Sampo is a pivotal element of the plot of the Finnish epic poem Kalevala, compiled in 1835 (and expanded in 1849) by Elias Lönnrot based on Finnish oral tradition. In the expanded second version of the poem, the Sampo is forged by Ilmarinen, a legendary smith, to fulfill a task set by the witch queen of Pohjola, Louhi, in return for her daughter's hand. "Ilmarinen, worthy brother, Thou the only skilful blacksmith, Go and see her wondrous beauty, See her gold and silver garments,