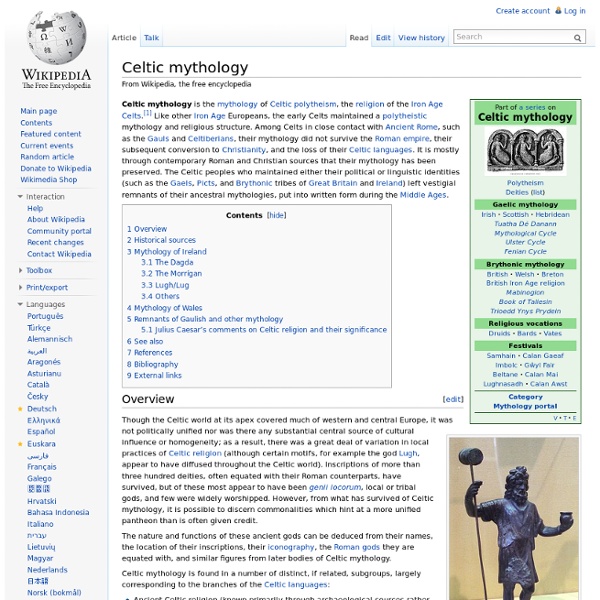 Overview[edit] Though the Celtic world at its apex covered much of western and central Europe, it was not politically unified nor was there any substantial central source of cultural influence or homogeneity; as a result, there was a great deal of variation in local practices of Celtic religion (although certain motifs, for example the god Lugh, appear to have diffused throughout the Celtic world). Inscriptions of more than three hundred deities, often equated with their Roman counterparts, have survived, but of these most appear to have been genii locorum, local or tribal gods, and few were widely worshipped. However, from what has survived of Celtic mythology, it is possible to discern commonalities which hint at a more unified pantheon than is often given credit. Celtic mythology is found in a number of distinct, if related, subgroups, largely corresponding to the branches of the Celtic languages: Historical sources[edit] Irish mythology[edit] Cuchulainn carries Ferdiad across the river

Celtic knot Stone Celtic crosses, such as this, are a major source of our knowledge of Celtic knot design. Carpet page from Lindisfarne Gospels, showing knotwork detail. Almost all of the folios of the Book of Kells contain small illuminations like this decorated initial. History[edit] Examples of plait work (a woven, unbroken cord design) predate knotwork designs in several cultures around the world,[2] but the broken and reconnected plait work that is characteristic of true knotwork began in northern Italy and southern Gaul and spread to Ireland by the 7th century.[3] The style is most commonly associated with the Celtic lands, but it was also practiced extensively in England and was exported to Europe by Irish and Northumbrian monastic activities on the continent. Examples[edit] See also[edit] References[edit] External links[edit]

Wulver The wulver is a kind of werewolf that is part of the folklore of the Shetland islands off the coast of Scotland. History[edit] The wulver kept to itself and was not aggressive if left in peace. Unlike most 'werewolves' the Wulver is not a shapeshifter and is not nor was it ever a human being. It appears to be a sort of immortal spirit. A similarly non-hostile werewolf is the Faoladh from Irish folklore, which was said to protect children and stand guard over wounded men. References[edit] Saxby, Jessie (1932). Horned God The term Horned God itself predates Wicca, and is an early 20th-century syncretic term for a horned or antlered anthropomorphic god with pseudohistorical origins[4] who, according to Margaret Murray's 1921 The Witch-Cult in Western Europe, was the deity worshipped by a pan-European witchcraft-based cult, and was demonized into the form of the Devil by the Mediaeval Church. The Horned God has been explored within several psychological theories, and has become a recurrent theme in fantasy literature.[5]:872 Horned God of Wicca[edit] For Wiccans, the Horned God is "the personification of the life force energy in animals and the wild"[6] and is associated with the wilderness, virility and the hunt.[7]:16 Doreen Valiente writes that the Horned God also carries the souls of the dead to the underworld.[8] In the name of the Lady of the Moon, and the Horned Lord of Death and Resurrection[12] Names of the Horned God[edit] Horned God in psychology[edit] Jungian analysis[edit] Humanistic psychology[edit]

Making Celtic Knots Here are some examples of Celtic knots and how to draw them yourself. I have written a Kindle book: How to design Celtic Knots - a guide for beginners - Buy UK - USA (or look up Jo Edkins in Amazon) Celtic knots are patterns representing ropes or threads tied in a knot. They are really mis-named. They appear in Roman mosaics, and were made by Vikings and Saxons as well as Celts.Many knots are continuous, with no loose ends, and these are also called Gordian knots or Gordic knots. This refers to the myth of the knot of Gordias. Outside links "Program to assist the creation, design and editing of 'celtic' style braids" - free OpenSource softwareSoftware for creating Celtic knots as a fontCeltic knot typeface - free to download, image, and Celtic knot generator.Hypknotix - Celtic knots website, software, artwork and resources My links You may also be interested in my website on mazes or mosaics or Greek keys or any of my other websites. © Jo Edkins 2003

The Soup Dragons History[edit] The Soup Dragons formed in Bellshill, a town near Glasgow, in 1985.[1] The line up was Sean Dickson (vocals, lead guitar), Jim McCulloch (guitar, second voice) who replaced Ian Whitehall and Sushil K. Dade (bass). The original drummer, Ross A. Sinclair, left the group after the first proper album, This Is Our Art, to pursue a career in art, and was replaced by Paul Quinn. Discography[edit] Albums[edit] Singles[edit] References[edit] External links[edit] Celtic polytheism Celtic polytheism, commonly known as Celtic paganism,[1][2][3] comprises the religious beliefs and practices adhered to by the Iron Age peoples of Western Europe now known as the Celts, roughly between 500 BCE and 500 CE, spanning the La Tène period and the Roman era, and in the case of the Insular Celts the British and Irish Iron Age. Celtic polytheism was one of a larger group of Iron Age polytheistic religions of the Indo-European family. It comprised a large degree of variation both geographically and chronologically, although "behind this variety, broad structural similarities can be detected"[4] allowing there to be "a basic religious homogeneity" amongst the Celtic peoples.[5] The Celtic pantheon consists of numerous recorded theonyms, both from Greco-Roman ethnography and from epigraphy. Among the most prominent ones are Teutatis, Taranis and Lugus. In the later 5th and the 6th centuries, the Celtic region was Christianized and earlier religious traditions were supplanted.

Interlace (art) Intricate braided and interlaced patterns, called plaits in British usage, are found in late Roman art in many parts of Europe, in mosaic floors and other media. Coptic manuscripts and textiles of 5th- and 6th-century Christian Egypt are decorated with broad-strand ribbon interlace ornament bearing a "striking resemblance" to the earliest types of knotwork found in the Insular art manuscripts of the British Isles.[1] This new style featured elongated beasts intertwined into symmetrical shapes, and can be dated to the mid-7th century based on the accepted dating of examples in the Sutton Hoo treasure.[1] The most elaborate interlaced zoomorphics occur in Viking Age art of the Urnes style (arising before 1050), where tendrils of foliate designs intertwine with the stylized animals.[4] Illustrated article by Peter Hubert on the origins of interlace sculpture.

Sport in Scotland Sport plays a central role in Scottish culture. The temperate, oceanic climate has played a key part in the evolution of sport in Scotland, with all-weather sports like association football, rugby union and golf dominating the national sporting consciousness. However, many other sports are played in the country, with popularity varying between sports and between regions. Scotland has its own sporting competitions and governing bodies, such as the Camanachd Association,the Scottish Rugby Union, Scottish Rugby League. Highland games, the largest and most widespread multi-sport festivals of the 19th century,[1] are claimed to have influenced Baron Pierre de Coubertin when he was planning the revival of the Olympic Games. [edit] Ever since the 19th century, the two main football codes in Scotland are association football (which is more commonly referred to as just "football" or "fitba") and rugby union, though the former being significantly dominant since World War II. [edit] [edit]

Green Man Types[edit] Lady Raglan coined the term "Green Man" in her 1939 article "The Green Man in Church Architecture" in The Folklore Journal.[3] Some commentators conflate or associate the term with "Jack in the Green".[4] Usually referred to in works on architecture as foliate heads or foliate masks, carvings of the Green Man may take many forms, naturalistic or decorative. The Green Man appears in many forms, with the three most common types categorized as: the Foliate Head: completely covered in green leavesthe Disgorging Head: spews vegetation from its mouththe Bloodsucker Head: sprouts vegetation from all facial orifices (e.g. tear ducts, nostrils and mouth)[5][6] In churches[edit] To the modern observer the earlier (Romanesque and medieval) carvings often have an unnervingly eerie or numinous quality. Later variations[edit] Modern images[edit] Green men, and variants on the theme, frequently occur in modern fantasy literature and science fiction. Related characters[edit] Neo-paganism[edit]

Celtic art The reverse side of a British bronze mirror, 50 BC - 50 AD, showing the spiral and trumpet decorative theme of the late "Insular" La Tène style Celtic art is the art associated with the peoples known as Celts; those who spoke the Celtic languages in Europe from pre-history through to the modern period, as well as the art of ancient peoples whose language is uncertain, but have cultural and stylistic similarities with speakers of Celtic languages. Celtic art is a difficult term to define, covering a huge expanse of time, geography and cultures. Both styles absorbed considerable influences from non-Celtic sources, but retained a preference for geometrical decoration over figurative subjects, which are often extremely stylised when they do appear; narrative scenes only appear under outside influence.[4] Energetic circular forms, triskeles and spirals are characteristic. Background[edit] Carved stone ball from Towie in Aberdeenshire, dated from 3200–2500 BC[7] Pre-Celtic periods[edit]

Tartan Tartan is a pattern consisting of criss-crossed horizontal and vertical bands in multiple colours. Tartans originated in woven wool, but now they are made in many other materials. Tartan is particularly associated with Scotland. Scottish kilts almost always have tartan patterns. The Dress Act of 1746 attempted to bring the warrior clans under government control by banning the tartan and other aspects of Gaelic culture. Until the middle of the nineteenth century, the highland tartans were only associated with either regions or districts, rather than any specific clan. The patterns were simply different regional checked-cloth patterns, chosen by the wearer's preference – in the same way as people nowadays choose what colours and patterns they like in their clothing, without particular reference to propriety. Etymology and terminology[edit] The English word tartan is derived from the French tiretain. Construction[edit] Diagram A, the warp Diagram B, the weft Diagram C, the tartan.