Hundreds of Proofs of God’s Existence 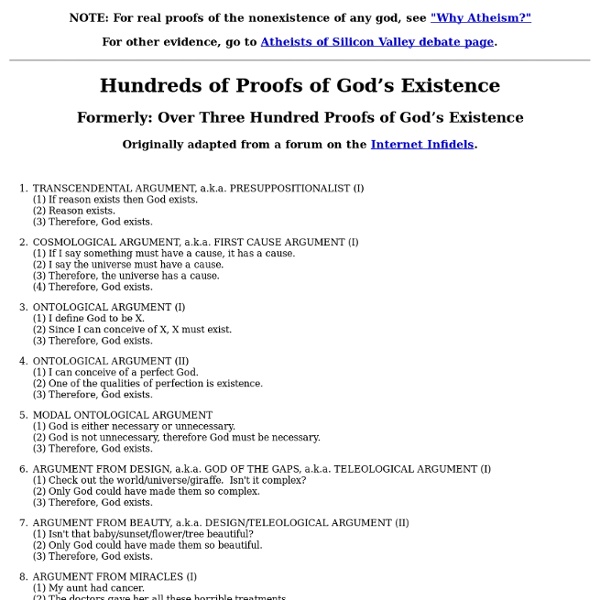 NOTE: For real proofs of the nonexistence of any god, see "Why Atheism?" For other evidence, go to Atheists of Silicon Valley debate page . Hundreds of Proofs of God’s Existence Formerly: Over Three Hundred Proofs of God’s Existence Originally adapted from a forum on the Internet Infidels . TRANSCENDENTAL ARGUMENT, a.k.a. (1) If reason exists then God exists. (2) Reason exists. (3) Therefore, God exists. COSMOLOGICAL ARGUMENT, a.k.a. (1) If I say something must have a cause, it has a cause. (2) I say the universe must have a cause. (3) Therefore, the universe has a cause. (4) Therefore, God exists. (1) I define God to be X. (2) Since I can conceive of X, X must exist. (1) I can conceive of a perfect God. (2) One of the qualities of perfection is existence. (1) God is either necessary or unnecessary. (2) God is not unnecessary, therefore God must be necessary. ARGUMENT FROM DESIGN, a.k.a. (1) Check out the world/universe/giraffe. (2) Only God could have made them so complex. ARGUMENT FROM BEAUTY, a.k.a.

Internet Sacred Text Archive Home Dr. Tian Dayton: The Hidden Pain of the Addicted Family Part of "Recovery Month" Series In the 1960s, when my Dad got treatment, we all thought that once the alcoholic got sober, the rest of us in the family would sort of get better automatically. Normalcy would be restored and we could all go on with our lives as if addiction had never really been there. We weren't total idiots, that's what everyone thought. If you happen to think this, I will save you a lot of time and heartache. How Addiction Leads to Trauma Living with addiction often results in cumulative trauma that deeply affects family members. How Trauma Leads to Addiction Living with the kind of unpredictable and damaging behaviors that surround addiction, often challenges our sense of a normal and predictable world. When the Addict Gets Sober Why Isn't the Whole Family Better? The addict sobering up is only the first step in healing. The addict may relapse. The family may break up or polarize. The sober addict may have to leave the family in order to get and stay sober.

Religion, World Religions, Comparative Religion - Just the facts on the world's religions. Deepak Chopra: How to Dispel the Darkness When people face a dark hour, as all of us have to, what is the best way to move out of it? The kinds of darkness haven't changed over the centuries, but our response has. The greatest change is that medicine has replaced religion as a way to explain what is happening. We speak of depression and anxiety as disorders, not as curses or as signs of sin. In the aftermath of trauma we don't ask why God wanted to punish us; we cope with post-traumatic stress disorder through therapy, either talking to a professional or taking a pill. The medical model is free of judgment; it removes blame from anyone who is afraid or depressed, who suddenly loses faith in themselves or wants to give up out of sheer hopelessness. Doctors can serve as modern replacements in order to alleviate immediate mental pain, but when it comes to wisdom or long-term change, they are relatively helpless. The paradox of suffering Suffering is universal, and yet pain isn't a good motivator for change. -- Working all the time

Essentials of Buddhism - core concepts Hiroshi Tasaka: 3 Strategies for Fusing Science and Spirituality What is the most important thing that will happen in the 21st century? The fusion of science and spirituality. That will happen. Why? Because this world in which we live changes, develops, progresses and evolves according to a certain law: the Law of Interpenetration of Dialectic. This law, advocated by German philosopher Georg Hegel, teaches us that "things which oppose and compete with each other come to resemble each other." Then, two questions arise in our minds: how will this fusion happen? Strategy 1: Teach Modern Science in the Religious Community (Natural Sciences Approach) When we learn the latest findings in the forefront of modern science, a sense of wonder naturally comes to our mind. Strategy 2: Deepen Modern Psychology Through the Wisdom of Traditional Religions and Spirituality (Human Sciences Approach) The most important question for the science of psychology in the 21st century is "Who am I?" An invited contribution to the Ervin Laszlo Forum on Science and Spirituality.

Judaism 101 Judaism 101 is an online encyclopedia of Judaism, covering Jewish beliefs, people, places, things, language, scripture, holidays, practices and customs. My goal is to make freely available a wide variety of basic, general information about Judaism, written from a traditional perspective in plain English. This web site has grown continually for more than 10 years and continues to be updated periodically. The information in this site is written predominantly from the Orthodox viewpoint, because I believe that is a good starting point for any inquiry into Judaism. As recently as 300 years ago, this was the only Judaism, and it still is the only Judaism in many parts of the world. Be aware, however, that many Jews do not follow all of the traditions described here, or do not follow them in the precise form described here. Where to Start There are over eighty web pages on this site, comprising over 300 pages of text, a virtual book of information on Judaism. Just browsing?

Aspen Ideas Festival 2011: Panel Agrees on Washington’s Problems. The Solutions, Not So Much | FORA.tv Blog Ron Brownstein True to form, the 2011 Aspen Ideas Festival kicked off with some big ideas on big problems. “We are here to talk about the state of the American political system and its ability to produce solutions,” said Ron Brownstein, political director at the Atlantic Media Company and moderator of the Aspen Ideas Festival’s June 28 panel discussion, “We Agree on Problems; Can We Agree on Solutions?” Mark McKinnon Brownstein painted a picture of just why the country can’t readily agree on solutions. He cited volatile voting that has produced record swings in partisan support, the highest level of party-line politics since Reconstruction, “a sour and distrustful public,” and a lack of progress on major issues. When all of this is set against a backdrop of 9 percent unemployment, he asked, is there a way out of this morass? Is Our Political Division a Reflection of Public Sentiment, or Just Partisan Politicians? David Axelrod Chief media advisor for George W. Vin Weber Jane Harman

Personal Mythology The Five Stages of Personal Myth-Making The natural five-stage sequence around which the tasks and activities of the personal mythology model are organized can be easily summarized: 1. A prevailing guiding myth (thesis) becomes outdated or otherwise dysfunctional. 2. 3. 4. 5. At any point in your life, any of your guiding myths may be going through any of these stages of mythic transformation.

Magickal Myths and Metaphors - Gothic, fantasy, Steampunk, Gifts, Alchemy Facts & Figures: Enchanted Objects Enchanted Objects Arthurian Legend The following magical objects found in the Arthurian legend are actually too enormous to list here. Since Arthur and some of his companions are found in Welsh (Celtic) literature, it is only right to list their possessions here. Back to the Appendix French Legend Though, the Charlemagne legend doesn't belong here, they are sometimes listed in Arthurian legend, comparing the object between two different legends. This page belongs to Timeless Myths. www.timelessmyths.com See Copyright Notices for permitted use. For feedback, questions, or just to say "hello", contact can made through the Contact page. Home | Arthurian Legends | Camelot | Age of Chivalry | Songs of Deeds Copyright: Timeless Myths © 1999 Jimmy Joe.

Mythical Creatures List, Mythical Creatures A-Z The Encyclopedia of Arda The Encyclopedia of Arda is a personal project - a tribute to and a celebration of the works of J.R.R. Tolkien. The site is evolving into an illustrated hypertext encyclopedia of Tolkien's realms and peoples. It already contains about four thousand entries, and we're constantly adding new entries and expanding existing ones. Inside the encyclopedia The Encyclopedia of Arda contains thousands of articles covering topics from J.R.R. You'll also find a selection of interactive tools, including a chronicle to help you explore Tolkien's fictional history, and calendar to translate dates and events, a lexicon of names, a glossary of old and rare words, and much more. Context and approach The content of the Encyclopedia is written in the same context as Tolkien himself used; he presented himself simply as a translator, rather than originator of the tales. About the name Arda Special thanks But the real Special Thanks, though, belong to the memory of J.R.R.