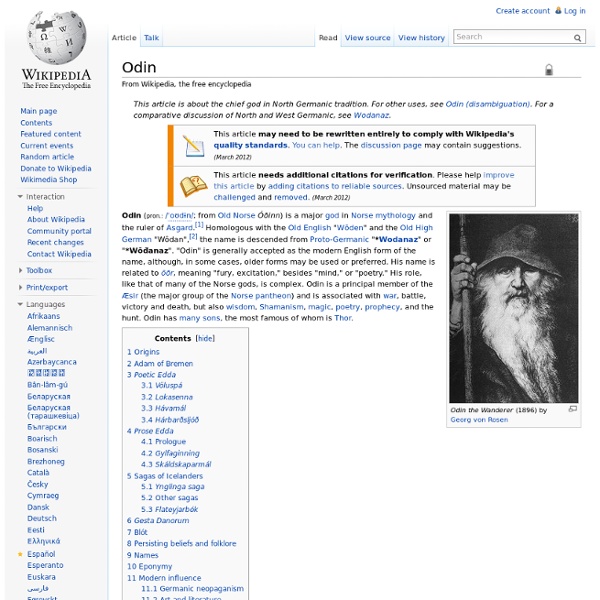 Etymology[edit] Odin's name is formed from "óðr" and the suffix "-inn". Old Norse had two different words spelled óðr, one an adjective and the other a noun. The adjective means "mad, frantic, furious, violent",[3] and is cognate with Old English wōd (hence the anglo-saxon Wōden).[4] The noun means "mind, wit, soul, sense" and "song, poetry".[5] Origin[edit] The 7th century Tängelgarda stone shows Odin leading a troop of warriors all bearing rings; Valknut symbols are drawn beneath his horse, which is depicted with four legs Originally, Odin was possibly considered mainly a shamanistic god and the leader of the war band. Parallels between Odin and the Celtic Lugus have often been pointed out. Adam of Bremen[edit] Written around 1080, one of the oldest written sources on pre-Christian Scandinavian religious practices is Adam of Bremen's Gesta Hammaburgensis ecclesiae pontificum. Poetic Edda[edit] Völuspá[edit] Lokasenna[edit] Hávamál[edit] The sacrifice of Odin (1895) by Lorenz Frølich

Hel (being) In the Poetic Edda, Prose Edda, and Heimskringla, Hel is referred to as a daughter of Loki and Angrboða, and to "go to Hel" is to die. In the Prose Edda book Gylfaginning, Hel is described as having been appointed by the god Odin as ruler of a realm of the same name, located in Niflheim. In the same source, her appearance is described as half black and half white flesh-coloured and further as having a gloomy, downcast appearance. The Prose Edda details that Hel rules over vast mansions with many servants in her underworld realm and plays a key role in the attempted resurrection of the god Baldr. Scholarly theories have been proposed about Hel's potential connections to figures appearing in the 11th century Old English Gospel of Nicodemus and Old Norse Bartholomeus saga postola, potential Indo-European parallels to Bhavani, Kali, and Mahakali, and her origins. The Poetic Edda, compiled in the 13th century from earlier traditional sources, features various poems that mention Hel.

Freyja In Norse mythology, Freyja (Old Norse the "Lady") is a goddess associated with love, sexuality, beauty, fertility, gold, seiðr, war, and death. Freyja is the owner of the necklace Brísingamen, rides a chariot pulled by two cats, owns the boar Hildisvíni, possesses a cloak of falcon feathers, and, by her husband Óðr, is the mother of two daughters, Hnoss and Gersemi. Along with her brother Freyr (Old Norse the "Lord"), her father Njörðr, and her mother (Njörðr's sister, unnamed in sources), she is a member of the Vanir. Freyja rules over her heavenly afterlife field Fólkvangr and there receives half of those that die in battle, whereas the other half go to the god Odin's hall, Valhalla. Etymology[edit] Attestations[edit] Poetic Edda[edit] In the Poetic Edda, Freyja is mentioned or appears in the poems Völuspá Grímnismál, Lokasenna, Þrymskviða, Oddrúnargrátr, and Hyndluljóð. Freyja and Loki flyt in an illustration (1895) by Lorenz Frølich The two go to see the beautiful Freyja.

Hades Names and epithets As with almost every name for the gods, the origin of Hades's name is obscure. The name as it came to be known in classical times was Ἅιδης, Hāidēs. Later the iota became silent.[3] Originally it was *Awides which has been claimed to mean "unseen".[4] This changed into Ἀΐδης, Aïdēs (and afterwards Āïdēs), with the dropping of the digamma. This Ionic and epic form of the name is the one used in epic poetry.[5] Poetic variants of the name include Ἀϊδωνεύς, Aïdōneus, and *Ἄϊς, Aïs (a nominative by conjecture), from which the derived forms Ἄϊδος, Āïdos, Ἄϊδι, Āïdi, and Ἄϊδα, Āïda, (gen., dat. and acc., respectively) are words commonly seen in poetry.[7] Epithets of Hades include Agesander (Άγήσανδρος) and Agesilaos (Άγεσίλαος),[10] both from agein (ἆγειν, "fetch" or "carry") and anēr (ἀνήρ, "man") or laos (λαός, "men" or "people"), describing Hades as the god who carries away all.[11][12][13][14] Nicander uses the form Hegesilaus (Ἡγεσίλαος).[15] God of the underworld Cult

Hecate Ancient Greek goddess of magic and crossroads Hecate was one of the main deities worshiped in Athenian households as a protective goddess and one who bestowed prosperity and daily blessings on the family.[5] In the post-Christian writings of the Chaldean Oracles (2nd–3rd century CE) she was regarded with (some) rulership over earth, sea, and sky, as well as a more universal role as Savior (Soteira), Mother of Angels and the Cosmic World Soul.[6][7] Regarding the nature of her cult, it has been remarked, "she is more at home on the fringes than in the center of Greek polytheism. Intrinsically ambivalent and polymorphous, she straddles conventional boundaries and eludes definition."[8] Name and origin[edit] The origin of the name Hecate (Ἑκάτη, Hekátē) and the original country of her worship are both unknown, though several theories have been proposed. Greek origin[edit] R. Egyptian origin[edit] Anatolian origin[edit] Later development[edit] Iconography[edit] Sacred animals[edit] Functions[edit]

Osiris Osiris (/oʊˈsaɪərɨs/; also Usiris), is an Egyptian god, usually identified as the god of the afterlife, the underworld and the dead. He was classically depicted as a green-skinned man with a pharaoh's beard, partially mummy-wrapped at the legs, wearing a distinctive crown with two large ostrich feathers at either side, and holding a symbolic crook and flail. Osiris is first attested in the middle of the Fifth dynasty of Egypt, although it is likely that he was worshipped much earlier;[4] the term Khenti-Amentiu dates to at least the first dynasty, also as a pharaonic title. Most information available on the myths of Osiris is derived from allusions contained in the Pyramid Texts at the end of the Fifth Dynasty, later New Kingdom source documents such as the Shabaka Stone and the Contending of Horus and Seth, and much later, in narrative style from the writings of Greek authors including Plutarch[5] and Diodorus Siculus.[6] Etymology of the name[edit] Appearance[edit] Early mythology[edit]

Nephthys Etymology[edit] Nephthys - Musée du Louvre, Paris, France Nephthys is the Greek form of an epithet (transliterated as Nebet-het, and Nebt-het, from Egyptian hieroglyphs).The origin of the goddess Nephthys is unclear but the literal translation of her name is usually given as "Lady of the House," which has caused some to mistakenly identify her with the notion of a "housewife," or as the primary lady who ruled a domestic household. Function[edit] Nephthys was known in some ancient Egyptian temple theologies and cosmologies as the "Useful Goddess" or the "Excellent Goddess".[2] These late Ancient Egyptian temple texts describe a goddess who represented divine assistance and protective guardianship. Nephthys is regarded as the mother of the funerary-deity Anubis (Inpu) in some myths.[3][4] Alternatively Anubis appears as the son of Bastet[5] or Isis.[6] Triad of Isis, Nephthys, and Harpocrates. "Ascend and descend; descend with Nephthys, sink into darkness with the Night-bark. Symbolism[edit]

Pluto (mythology) God in Greek mythology Pluton (1884–86) by Henri Chapu, part of a pair with a standing Persephone gathering flowers Hydria (ca. 340 BC) depicting figures from the Eleusinian Mysteries Plouton with cornucopia (Attic red-figure amphora, ca. 470 BC) Attributes of Pluto mentioned in the Orphic Hymn to Pluto are his scepter, keys, throne, and horses. An ageing specimen of Mediterranean cypress The Smyrna inscription also records the presence of Helios Apollon at the sanctuary. Serapis with moon and sun on oil lamp Etruscan Charun presiding over an execution In the Little Book on Images of the Gods, Pluto is described as Jean Raoux's Orpheus and Eurydice (1718–20), with Pluto and Proserpina releasing the couple Rembrandt's Abduction of Proserpina (ca. 1631) Major artists who produced works depicting Pluto include: Scientific terms derived from the name of Pluto include: Media related to Pluto (mythology) at Wikimedia Commons

Azrael Background[edit] Depending on the outlook and precepts of various religions in which he is a figure, Azrael may be portrayed as residing in the Third Heaven.[3] In one of his forms, he has four faces and four thousand wings, and his whole body consists of eyes and tongues, the number of which corresponds to the number of people inhabiting the Earth. He will be the last to die, recording and erasing constantly in a large book the names of men at birth and death, respectively.[4] He will receive the souls in the graves In Judaism[edit] In Jewish mysticism, he is commonly referred to as "Azriel," not "Azrael." The Zohar (a holy book of the Jewish mystical tradition of Kabbalah), presents a positive depiction of Azriel. In Christianity[edit] There is no reference to Azrael in the Catholic Bible, and he is not considered a canonical character within Christianity. A story from Folk-lore of the Holy Land: Moslem, Christian and Jewish by J. In Islam[edit] In Sikhism[edit] See also[edit]