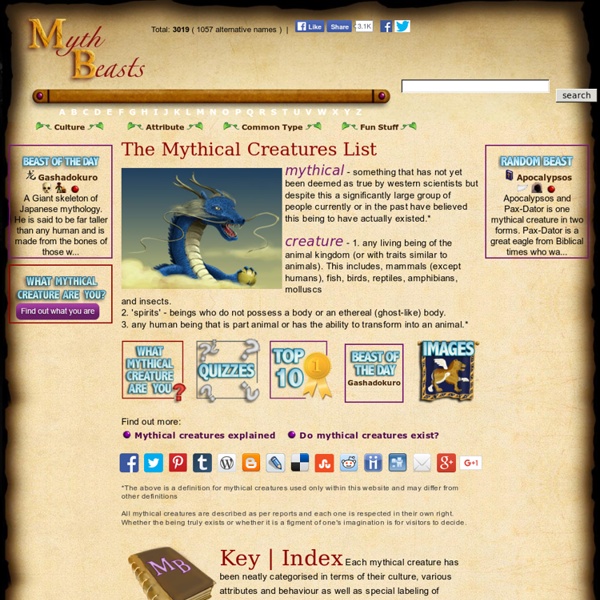 mythical - something that has not yet been deemed as true by western scientists but despite this a significantly large group of people currently or in the past have believed this being to have actually existed.* creature - 1. any living being of the animal kingdom (or with traits similar to animals). This includes, mammals (except humans), fish, birds, reptiles, amphibians, molluscsand insects. 2. 'spirits' - beings who do not possess a body or an ethereal (ghost-like) body. 3. any human being that is part animal or has the ability to transform into an animal

Related:  dianemarycowan2 • History • Mitologia • The Truth Is Out There • Folklore, Myth and Witchcraft

America's Flag Proportions 100% woven, spun Polyester, this is the most durable flag material ever created. With the look of cotton, this material was designed and engineered especially for industrial, commercial or institutional use or wherever severe climactic conditions exist. Brand Names: Tough-Tex, Koralex II, Champion, Polywavez, Poly-Max, PolyExtra. Nylon: Describes flags made of 100% SolarMax nylon for outdoor use. Strong and durable, special parachute cloth treatment reduces sun and chemical deterioration. Family tree of the Greek gods Greek cosmological entities Essential Olympians and Titans The essential Olympians' names are given in bold font. See also

ummo Exhibit / February 12, 2019 Cutaway image of an Ummite UFO, from UMMO letter D69-1, 1968. Photo purportedly taken on the outskirts of Madrid of a UFO with UMMO markings on its underside, 1967 Creatures Mythical Magical & Supernatural All who believe in witches and magic also believe in magical creatures, witches and sorcerers have a telepathic link with them. Mythical creatures were said to be bringers of gifts and messages sent by the deities. These wonderful creatures can be invoked for their unique qualities and strengths, and bring their magical energy to spells and rituals. The ancient Egyptians believed that these sacred creatures embodied the characteristics of their ruling goddesses and gods. Human form is not particularly important in many tribal societies, as they believe all creatures are constantly shape shifting, humans may become animals or birds, and animals or birds may become human beings. Some European warriors about to go into battle, entered a trance state and were possessed by the spirit of the wolf.

Did the CIA test LSD in the New York City subway system? On Nov. 28, 1953, Frank Olson, a bland, seemingly innocuous 42-year-old government scientist, plunged to his death from room 1018A in New York’s Statler Hotel, landing on a Seventh Avenue sidewalk just opposite Penn Station. Olson’s ignominious end was written off as an unremarkable suicide of a depressed government bureaucrat who came to New York City seeking psychiatric treatment, so it attracted scant attention at the time. But 22 years later, the Rockefeller Commission report was released, detailing a litany of domestic abuses committed by the CIA. The ugly truth emerged: Olson’s death was the result of his having been surreptitiously dosed with LSD days earlier by his colleagues. The shocking disclosure led to President Gerald Ford’s apology to Olson’s widow and his three children, who accepted a $750,000 civil payment for his wrongful death. But the belated 1975 mea culpa failed to close a tawdry chapter of our nation’s past.

Shadow person An artist's impression of a shadow person as a paranormal entity A shadow person (also known as a shadow figure, shadow being or black mass) is the perception of a patch of shadow as a living, humanoid figure, particularly as interpreted by believers in the paranormal or supernatural as the presence of a spirit or other entity.[1] Many methamphetamine addicts report hallucinations of "shadow people", as a result of sleep deprivation. History and folklore[edit]

Dyatlov Pass incident The Dyatlov Pass incident (Russian: Гибель тургруппы Дятлова) refers to the unsolved deaths of nine ski hikers in the northern Ural Mountains in the Soviet Union (now Russia) between 1 February and 2 February 1959. The area in which the incident took place was named Dyatlov Pass in honor of the group's leader, Igor Dyatlov. The experienced trekking group, who were all from the Ural Polytechnical Institute, had established a camp on the slopes of Kholat Syakhl when disaster struck. During the night, something caused them to tear their way out of their tents and to flee the campsite while inadequately dressed during a heavy snowfall and sub-zero temperature. After the discovery of the group's bodies, Soviet Union investigators determined that six victims died from hypothermia and that the three others showed signs of physical trauma.

S. Korea Prepares to Evacuate DMZ Citizens After Threat South Korea is preparing to evacuate more than 800 residents along the demilitarized zone after North Korea threatened to fire on activists planning to send balloons across the border carrying leaflets critical of its regime. While no orders to leave are currently in place, authorities have been preparing citizens residing within the civilian control line to evacuate if any signs of a possible attack emerge, Park Kwang Hae, an official at Paju City Council, said by telephone today. The threat of an attack against activists is the first since North Korean leader Kim Jong Un succeeded his father Kim Jong Il in December. South Korea has not sighted any unusual troop movements north of the border today, said a Defense Ministry official, who could not be named due to military policy.

Animals in Mythology - Myth Encyclopedia - Greek, god, story, legend, ancient, famous, snake, war, norse, Japanese, world Since the beginning of human history, people have lived in close contact with animals—usually as hunters and farmers—and have developed myths and legends about them. All kinds of creatures, from fierce leopards to tiny spiders, play important roles in mythology. A myth can give special meaning or extraordinary qualities to common animals such as frogs and bears.