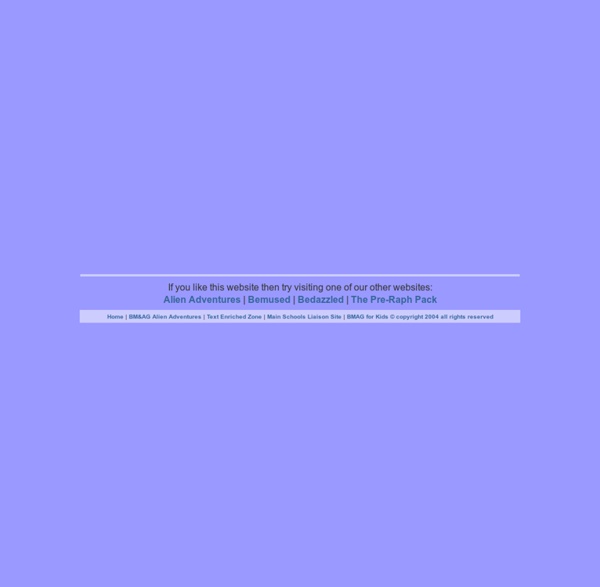 Egyptian tomb adventure Please note that unfortunately there is an error in this game. The part of the game that looks at canopic jars incorrectly states that in an Egyptian burial the jar in the form of the human-headed god Imsety contains the lungs and the jar in the form of the baboon-headed god Hapy contains the liver. However, Imsety should contain the liver and Hapy the lungs. If you like this you may also like... The Three Pyramids Can you prepare our high priest for the afterlife before the sun rises? Mummy Priest Discover the secrets guarded by this mysterious Ancient Egyptian figure.

vintage everyday Ancient Egypt Ancient Egypt The Pyramids, the Sphinx, the Pharaohs, Cleopatra, Alexandria--all these things come alive in this study of the ancient civilization along the Nile. An Introduction to Ancient Egypt See Ancient Egypt in all its glory! Learn about the importance of the Nile. Ancient Egypt Glossary See the people, places, and things that made up ancient Egypt. Maps of Ancient Egypt Where were the Pyramids? The Great Egyptian Pyramids Learn more about the great Pyramids at Giza and elsewhere, as well as how and why they were built. Hatshepsut: The Famous Female Pharaoh The history of Egypt is filled with exciting and unusual stories, perhaps none so much as that of Hatshepsut, a female pharaoh. Ancient Egypt Resources Ancient Egypt comes alive in the pages put together by your About Guide to Ancient/Classical History. Ancient Egyptian Costumes The biggest selection of Egyptian Halloween costumes and accessories available online. CleopatraCleopatra has her own place in Egyptian history. Next 1 2

Egypt Pyramids Pharaohs Hieroglyphs - Mark Millmore's Ancient Egypt Historical Atlas of the British Empire Ancient Egypt - Kids Social Studies Videos Ancient Egypt for Kids Ancient Egypt was a civilization that thrived for over 3000 years along the Nile River in northeastern Africa. It was the longest-lived civilization of the ancient world, reigning from 3150 BC to 30 BC. The ancient Egyptians developed a sophisticated writing system, a system of medicine and very effective irrigation and farming techniques. They developed a system of mathematics and advanced construction techniques that helped them build monumental pyramids, temples and other huge structures. Ancient Egyptians left a huge cultural legacy for the whole world. History Games, Diagrams & Activities : Pictures & School Presentations : History Videos & Lessons:(Reviewed by K-12 teachers) Search Videos Suggest History Videos Click below to find & suggest other history videos. Topic : Ancient Egypt Standards Common Core State Standards Videos are embedded and streamed directly from video sites such as YouTube and others.

Explore Ancient Egypt Explore Ancient Egypt with our Interactive Map © 2012 This website is produced by the Student Recruitment, Admissions and International Development Division at The University of Manchester International Big History Association - Home s Tomb at neferchichi.com Here are some links that bring you to web pages with Egypt-themed lesson plans and activities. Links that go outside this site will open into a new window. Here are some activity ideas to try out in the classroom... Make Simulated Papyrus Papyrus scrolls were made by taking slices of the inner part of the papyrus stem and arranging them in perpendicular layers. Unification of Upper and Lower Egypt Explain how Narmer unified Egypt in 3100 BC, and that the double crown was created by combining the white crown of Upper Egypt with the red crown of Lower Egypt. New Deities Ask the class to come up with a list of some of the animals that live in your state. Bizarre Bazaar After teaching about bartering and supply/demand, have a bartering session. The Egypt Game Have the children read "The Egypt Game" by Zilpha Keatley Snyder.

Aztec Children The lives of Aztec children are fascinating in many respects. To understand how children fit into Aztec culture, and how they were honoured, we should go right back to the beginning... even before the children were born. Birth Since warfare was glorified by the Aztecs, it was even used to symbolize childbirth. A hymn for a new child sung to the goddess of childbirth, found in the Codex Florentino, said: Down there, where Ayopechcatl lives, the jewel is born, a child has come into the world.It is down there, in her own place, that the children are born.Come, come here, new-born child, come here.Come, come here, jewel-child, come here. A soothsayer then came to the home of the newly born child to study the astrological significance of the child's birth, down to the exact day and minute of the child's entrance into the world. Aztec children and their Parents All of the evidence is that Aztec parents loved their children deeply. Chores and school More about classes and society Games and song